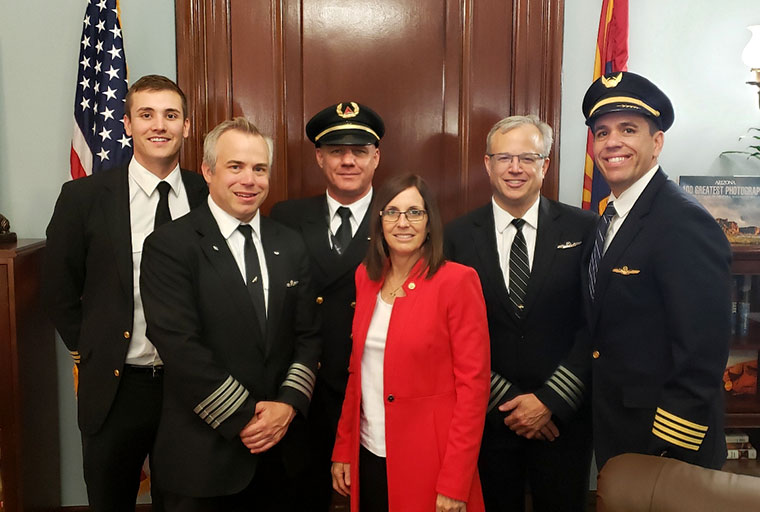 On June 5, 156 pilots—in full uniform—from 38 states mobilized on Capitol Hill to conduct approximately 200 meetings with Members of Congress as the closing flourish of ALPA’s 7th Annual Government Affairs Legislative Summit. Serving as the voice of ALPA and the airline piloting profession, they met with these federal decision-makers to advocate for the Association’s pilot-partisan agenda.

During this year’s summit, which took place June 3–5 in Washington, D.C., attendees learned about ALPA’s legislative agenda and how to present issues thoughtfully and personally—and how to “make the ask” of Members of Congress to support the Association’s legislative priorities. They then put what they learned into action during “Hill Day,” the summit’s finale.

The power of unionism

Capt. Joe DePete, ALPA’s president, opened the Legislative Summit, highlighting the power of unionism, remarking, “We’re all proud to be airline pilots” while discussing the associated responsibilities. “ALPA pilots are leading boldly on the issues facing us and our profession,” he asserted. 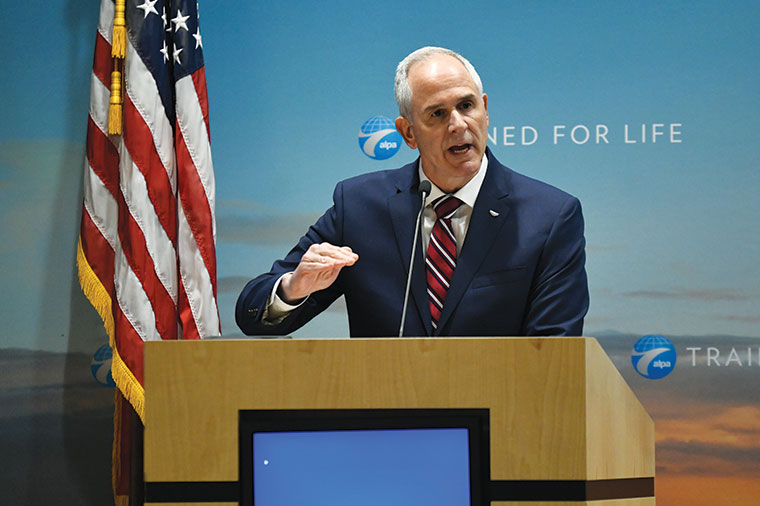 Capt. Joe DePete, ALPA’s president, welcomes pilots to the Legislative Summit and impresses upon them the importance of their role.

ALPA’s president referenced the FAA Reauthorization Act of 2018 and the high level of “ALPA wins” the bill contained. He noted that this year ALPA’s legislative priorities focus on

Capt. Bob Fox, ALPA’s first vice president, noted, “Your presence here represents the dedication that every airline pilot has to the Association’s mission of ensuring aviation safety and security while advancing the profession’s future.” 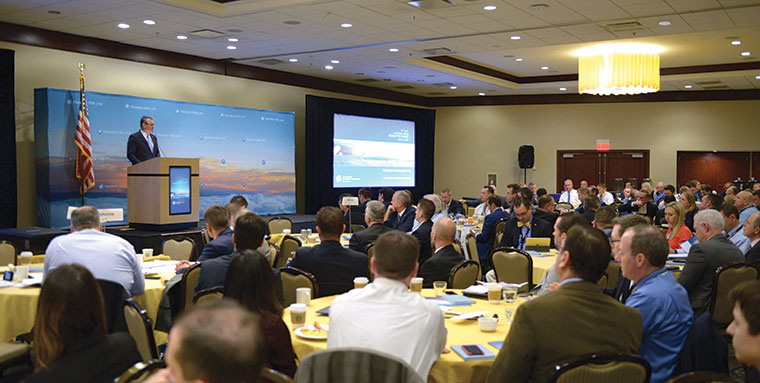 The first two days of the summit consisted of presentations to inform the pilots on ALPA’s top issues and discuss best practices during their visits with Members of Congress. They heard from ALPA staffers and pilot subject-matter experts on the nuts and bolts of the Association’s positions, from advocacy professionals on persuasion and story-telling techniques and social media protocol, and from Members of Congress and their staffers on how to quickly get their points across in the limited amount of time these meetings allow.

“Tell your story” was a common theme, as pilots were reminded repeatedly to bring a personal aspect to their hill visit to make a true impact and be remembered. “The key to the process,” stated Fox, “is combining emotion with information in a way to make it memorable and—most importantly—actionable.”

“ALPA pilots—and all who rely on air transportation—are depending on you to tell your story this week,” added DePete. “Because of all who came before you and because you’re here today, the lawmakers of this country will be listening.”

“We’re highly trained professionals who constantly review our operation, identify contingencies, and seek out ways to make a very safe system ever safer,”
ALPA’s president said. “We deliver on the responsibility we shoulder every flight of every day, 365 days a year. This commitment is part of our shared value of advancing safety, and it’s the reason for the immense credibility we carry when we walk down the halls of Congress.”

Fox also discussed pilot activism, tracing it back to the Association’s 24 “Key Men,” and particularly Capt. Dave Behncke, ALPA’s first president. “Capt. Behncke pioneered the approach we still use today to raise awareness on the hill,” he said. “Having pilots share their personal stories with decision-makers firsthand and putting a real face to it.”

And the fact that those faces belonged to constituents was important. “Putting a constituent face on these issues brings ALPA to life,” said Vanessa Kermick, ALPA’s grassroots representative. She reiterated the need to not only make the stories personal but also to reinforce the impact the issue has on the Member of Congress and on the state or district.

The pilots saw success with this model, too. F/O Taylor Skinner (Compass) was attending his first Legislative Summit and reported success after his Capitol Hill visits. “All elected officials who we met with agreed to support our stance on flags of convenience and said they would try to enforce secondary barriers,” he said. “I believe this success was because we were able to help put a face to the pilots being affected.” 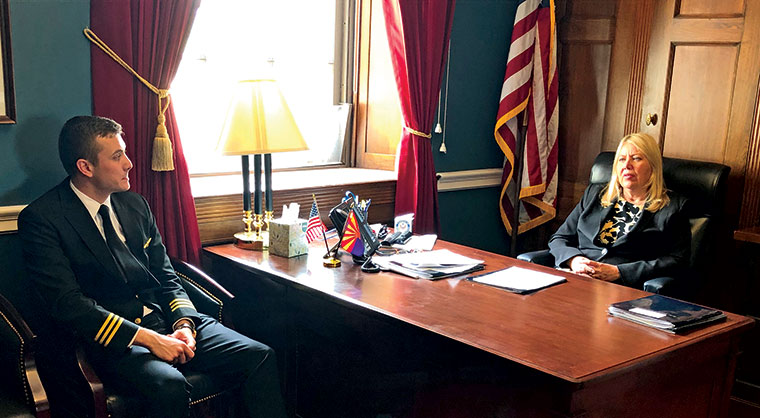 Capt. Andrew Hobin (Alaska) met with five different Members of Congress or their staff and concurred. “Legislative affairs make a difference,” he said. “We have to engage with lawmakers—and our efforts are making a difference.”

During visits on the hill, ALPA members were also encouraged to engage in a social media campaign regarding ME3 unfair subsidies.

“The meeting essentially didn’t happen unless you make the ask,” cautioned Matt Irwin, an ALPA political and legislative assistant. The ask is what ALPA would like the Member of Congress to do in response to these visits and the issues.

For secondary barriers, it’s sending a letter to Department of Transportation Secretary Elaine Chao—writing their own or cosigning a colleague’s—reiterating the intent of Congress in its language regarding the implementation timeline; for flag-of-convenience and atypical business models, it’s a request to support the forthcoming proposed legislation from Rep. Peter DeFazio, ALPA’s 2019 Pilot Partisan of the Year (see “Honoring Top Advocates”); and for one level of safety and security, it’s an appeal to support legislation coming up later in the year.

And these asks can be made by any ALPA pilot to his or her Member of Congress. Tweet at them, write an e-mail, or best of all, visit them in their home districts or in their offices in Washington, D.C. Every voice matters and every visit helps. (See “District Advocates: Advancing ALPA’s Pro-Pilot Agenda.”)

Skinner is already planning to return to Capitol Hill later this summer. “It’s so important for pilots to get out there and share their experiences with elected officials,” he acknowledged. “Protecting our careers and ensuring the safety of the passengers on our flights is critical.”

“Regardless of where we fly or what we carry,” DePete reiterated, “ALPA pilots know that the strongest safety asset on any flight is the presence of at least two fully qualified, highly trained, and well-rested pilots on the flight deck.”

With that knowledge and background on ALPA’s current priorities, the contingent of ALPA pilots walked the few blocks to Capitol Hill before dispersing to a myriad of offices surrounding the Capitol’s iconic Rotunda. And while the faces on the other side of the desk changed, the voice of ALPA’s pilots never strayed from course—keeping North American aviation the safest form of transportation in the world.

When ALPA pilots visit their Members of Congress on Capitol Hill, the pilots’ messages come across loud and clear. Is it the amount of training coming through? The air of authority? An extension of pilot-in-command?

The first step in making ALPA’s voice heard is, of course, showing up. During ALPA’s 7th Annual Government Affairs Legislative Summit, Sen. Todd Young (R-IN) addressed the pilots, noting the influence of so many pilots taking to Capitol Hill together. “Your presence here together in Washington, D.C., is pivotal in ensuring that your voice is heard on your issues.”

And when ALPA pilots show up, they show up prepared. In between meeting with pilots in his office and rushing off to the House floor for a vote, Rep. Salud Carbajal (D-CA) addressed pilot advocates, sharing, “I’m always impressed with the knowledge level [pilots] have, not only of their field but legislation that affects them and the industry,” he said. “It’s important for me to hear that voice from ALPA and the pilots.”

Rep. Ruben Gallego (D-AZ) estimated that he speaks to pilots roughly 10 times a year both in Washington, D.C., and back home. After his most recent meeting with ALPA members, he praised them for being “very well-versed—more well-versed than a lot of other constituents who come to talk about their particular interests.” He noted that when an ALPA pilot visits, “I can get an honest assessment about what I need to know in terms of making decisions when it comes to the airline industry.”

Rep. Bennie Thompson (D-MS), chair of the House Homeland Security Committee, observed that pilot visits resonate because “when you visit me in my office, you’re talking about safety, you’re talking about security,” he explained. “It’s not personal wants and needs. That says a lot about who you are as professionals.”

Remarking that Rep. Peter DeFazio (D-OR) has “been in the trenches with us in the fight for safer skies since he first came to Congress in 1987,” Capt. Joe DePete, ALPA’s president, honored him as ALPA’s Pilot Partisan of the Year during a banquet at the Association’s 7th Annual Government Affairs Legislative Summit. 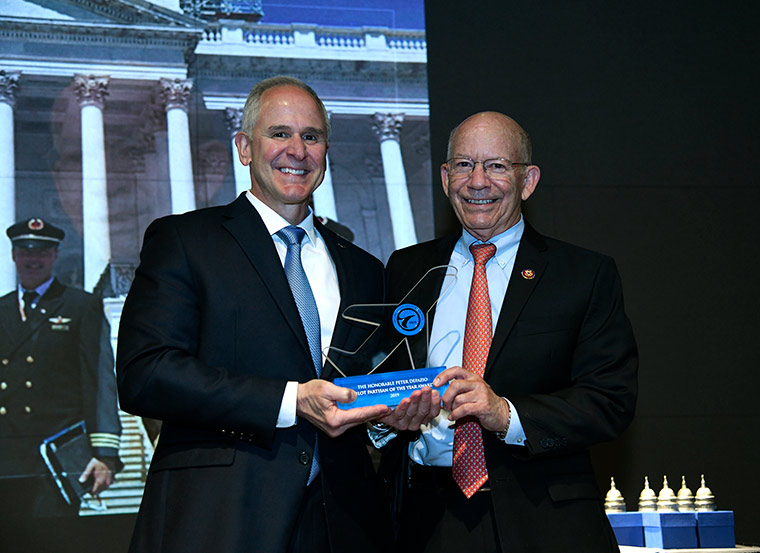 DePete ran through an impressive, decades-spanning list of priorities that DeFazio has fought side by side with ALPA—calling for the installation of secondary cockpit barriers, opposing flag-of-convenience business models, mandating that state-owned enterprises comply with trade agreements, creating the Federal Flight Deck Officer program, and banning smoking on airplanes, to name just a few. DePete concluded, “He’s been one of the strongest champions for pilots in Congress.”

After a standing ovation, DeFazio updated pilots on the status of current ALPA priorities in Congress and invited feedback, saying, “I’m always happy to be informed by pilots” before closing his speech with “thank you for keeping me safe for about six million miles.”

Learn how you can become a member of the A-Team Class of 2020.

ALPA’s top advocacy pilots, the members of the A-Team Class of 2019.

This article was originally published in the June 2019 issue of Air Line Pilot.