Continuing the Legacy of 9/11, 20 Years and Beyond

Protecting the Flight Deck from Disruption and Harm 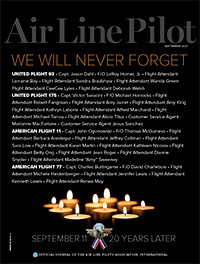 In the United States, the historic payroll support program has more than revealed its value over the last few months as a qualified and trained pilot workforce has safely carried passengers and freight into the skies while the global airline industry embarks on a careful recovery. Unfortunately, intensifying disruptive passenger incidents have at the same time been raising serious concern. Now, as throughout the pandemic, ALPA pilots continue to lead the industry in enhancing the safety and security of air travel.

For years, ALPA has advocated for a layered response to curbing unruly passenger incidents and protecting the flight deck. Based on recent data, these incidents are becoming an increasingly hazardous threat to individual flights as well as to the national airspace. Flight diversions, emergency landings, and other operational responses to disruptive incidents can cause flight delays that could potentially affect passengers throughout the system.

ALPA’s three-pronged policy solution centers on education and training, law enforcement, and improving the security of the flight deck. All three elements are essential, and achieving them will require collaboration among government, labor, airlines, airports, and law enforcement to succeed in preventing a potential breach of the flight deck and even the possible downing of an airliner.

The most effective measure to preventing a disruptive passenger incident is keeping problem passengers off aircraft. Government and industry must do more to inform the flying public about what constitutes a disruptive passenger event and deter such behavior by making clear that participating in such an incident carries predictable and serious consequences.

Approximately half of disruptive passenger incidents involve individuals under the influence of alcohol or drugs. More needs to be done to educate the flying public as well as airlines and airports about the opportunity to increase safety and security by decreasing passenger alcohol use while at the airport and during flight. Airport managers should educate their restaurant and bar tenants about the important role they play in aviation safety and encourage them to implement and adhere to reasonable alcohol restrictions for their customers. In addition, personnel who work in the terminal should be trained in how to identify and report potentially disruptive passengers.

Based on the uptick in disruptive passenger events, more must also be done to ensure that law enforcement response and penalties associated with these events reflect the gravity of the threat to public safety. As part of this effort, a standardized and highly predictable law enforcement outcome such as the FBI’s “Ticket Book” program should be instituted at all commercial airports nationwide.

In addition, we must fully secure the flight deck on the entire U.S. fleet. When Congress passed the FAA Reauthorization Act of 2018, it included language directing the FAA to issue a regulation within one year that would require all newly manufactured passenger airliners to be equipped with secondary flight deck barriers that add another layer of security when the flight deck door is open during flight.

Despite this unambiguous direction, the FAA has failed for nearly three years to issue a final regulation. At a time when U.S. lawmakers are rightly taking additional steps to protect the flight deck by introducing H.R./S. 911, legislation that would require secondary flight deck barriers on all U.S. airliners, not just those that are newly manufactured, the FAA continues to permit a known security threat to persist and jeopardize U.S. passengers and crews.

As the world’s largest nongovernmental aviation safety organization, ALPA is equally committed to protecting the flight deck on all-cargo aircraft, which are vulnerable to takeover because of the lack of an intrusion-resistant flight deck door. For this reason, ALPA supports the Cargo Flight Deck Security Act of 2021, which would require these primary barriers on all-cargo aircraft.

The loss of four U.S. airliners and nearly 3,000 lives on Sept. 11, 2001, was a terrible and tragic demonstration of the vulnerability of the flight deck. The recent spike in increased passenger disruptions, assaults on frontline aviation workers, and heightened international security concerns rooted in tense geopolitical shifts, including the recent hostile regime change in Afghanistan, demonstrate how important it is for the FAA to finally issue regulations implementing a law that would help stop a would-be terrorist from breaching the flight deck door.

Whether in the context of stopping a potential attack or a disruptive passenger under the influence, the airline industry, along with government, airlines, airports, aviation workers, and law enforcement, must take every possible action to protect the flight deck.

Keeping the piloting profession strong and accessible through higher education.

COVID-19 Variants and Their Implications for Airline Pilots

Promoting the Profession at Schools, Conferences, and Oshkosh

Capt. Bill Couette, vice president–administration/secretary, on how ALPA is ensuring the future of the airline profession.