Stopping Laser Attacks on Aircraft: No Shot in the Dark

“Startling” and “disorienting” are words that airline pilots frequently use to describe how it feels to be attacked with a laser pointer while flying a plane. For pilots who fly into some U.S. and Canadian airports, the experience of seeing a green light slicing across the cockpit has become unnervingly common. In light of the risk, ALPA is making certain that the industry’s response strategy is no shot in the dark when it comes to safeguarding air transportation.

In mid-July, laserpointersafety.com reported that, according to the FAA, there were 2,750 reports of laser illuminations of aircraft in the United States from January 1 through July 3, 2015. The website estimates that “based on past years’ trends, this means that at the end of 2015, there could be between about 5,600 and 7,400 incidents. This would be a 62 percent increase over the 2014 total of 3,894 incidents.”

In Canada, there were 502 reported incidents in 2014, a 43 percent increase since 2012, according to Transport Canada.

“North America can and must reverse the forecasts for the future number of laser attacks on aircraft,” said Capt. Tim Canoll, ALPA’s president. “We will need to do more to fully engage in a solution that combines education, reporting, enforcement, and technology to protect North American air transportation.”

On one evening in July, some 11 airliners were reportedly struck with lasers in the span of just 90 minutes while flying over New Jersey to Newark Liberty International Airport or LaGuardia Airport, according to The New York Times. The flights all landed safely, but one pilot was reportedly temporarily blinded.

The toll of a laser strike on pilots has the potential to become very serious. “We suffered flash blindness, after-imaging, and then retinal burning that continued on for a while,” Capt. Robert Hamilton (PSA), ALPA’s Security Council chairman, told CBS This Morning about the multiple laser attacks he has experienced in an interview that aired on Sept. 14, 2015. “We have to complete checklists, configure the aircraft, change our speed, change our pitch attitude, prepare the aircraft for landing or taking off, and at that moment to have our vision taken away from us, which is the most critical phase of flight, is a very serious safety risk.” 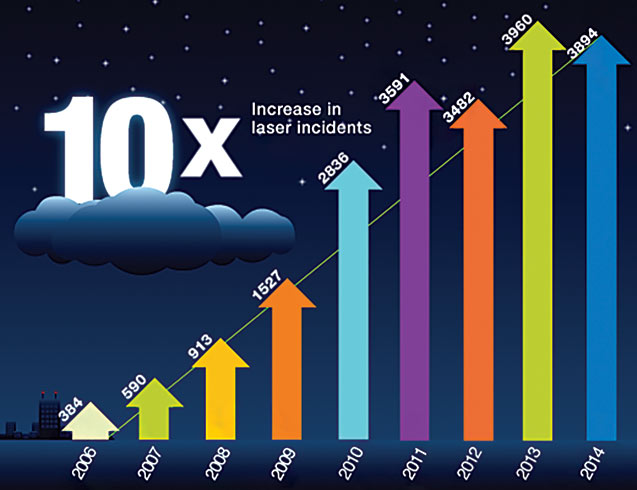 Graphic courtesy of the FAA

In 2014, ALPA began working in partnership with the FAA and the FBI to promote the “Protecting Aircraft from Lasers” campaign to reach out to the general public about the dangers of shining a laser at an aircraft. The campaign, which featured a “Don’t Let a Prank Lead to Prison” public service announcement, highlighted that the FAA Modernization and Reform Act of 2012 makes it a federal felony to knowingly point the beam of a laser at an aircraft. The crime carries a punishment of up to five years in prison and a $250,000 fine in the United States.

In June 2015, ALPA partnered with Transport Canada on its “Not a Bright Idea” anti-laser-strike campaign. Aiming a laser at an aircraft is also a federal offense in Canada. If an individual is convicted under the Aeronautics Act, he or she could face up to $100,000 in fines and five years in prison.

On an industry level, ALPA continues to build on the momentum sparked by the union’s 2011 Laser Illumination of Aircraft Symposium to maintain a strong industry focus on doing more to address the laser threat.

“Every sector of aviation stands at risk from the preventable safety threat laser strikes pose,” said Capt. Joe DePete, ALPA’s first vice president and national safety coordinator. “We know from experience that both passenger and all-cargo flights have suffered laser attacks during the most important phases of flight, so the industry must act jointly in pursuing a solution.”

In June, ALPA hosted a meeting with Transport Canada, the FAA, and the FBI to share strategies to reduce laser attacks and enhance methods for engaging the public and enlisting law enforcement support. Strategic collaboration between the United States and Canada and information sharing form the basis of ALPA’s work across industry.

ALPA continues to call for the full enforcement of federal penalties that intentionally shining a light at an aircraft carry. In a July 16 story in The New York Times, FBI spokeswoman Mollie F. Halpern stated that since 2004, there have been 162 arrests for laser interference with aviation across the country. Of those, 132 were prosecuted, 97 of them under federal jurisdiction with 87 people convicted.

In one recent example, a Portland, Ore., man was sentenced to six months in federal prison for two felony counts of aiming a laser pointer at airliners as they approached Portland International Airport for night landings in October 2013. The Portland man told the FBI that over several months he had targeted up to 25 aircraft and that he did so for entertainment. According to the FBI, investigators reported more than 100 laser strikes from the vicinity of the defendant’s apartment in 2013.

“As hard as it is to believe, some individuals make a deliberate choice to repeatedly endanger the lives of air travelers as well as people on the ground by aiming lasers at aircraft,” continued DePete. “We owe it to the public safety to fully enforce the law and apply the prison time and fines that come with violating it.”

In yet another approach to addressing the safety threat from laser strikes on aircraft, ALPA is pressing to broaden research and develop countermeasures to protect pilots’ eyes and maintain safety of flight.

During ALPA’s Air Safety Forum in July, presenters and exhibitors included manufacturers of new eyewear technology designed to protect pilots’ eyes against lasers. While these products have not been approved for use, they offer a sampling of the potential countermeasures that could form an additional safeguard.

ALPA strongly supports the research of countermeasure technology in civilian airspace. As a member of the Aviation Safety Subcommittee of the FAA’s Research, Engineering & Development Advisory Committee (REDAC), ALPA took the opportunity this summer to highlight the fact that the government should consider technical solutions to safeguard U.S. aviation from laser attacks in addition to education and law enforcement measures.

For any anti-laser technology, airline pilots’ perspectives are essential to understanding how a particular product or practice will work in the cockpit while flying. One example is that some navigational and instrument lights such as lead-in and lead-out runway lights and flight management system text displays can fall in the same part of the visible spectrum as green lasers. As a result, efforts to block green laser light could also affect pilots’ ability to see and interpret safety instrumentation.

Working through the REDAC subcommittee, ALPA has advocated for the FAA to research and develop technical countermeasures that reflect key characteristics for airline pilots. Any countermeasure must be effective against a high percentage of laser strikes, require no action by the flight crew that would disrupt or complicate normal flight operations, be capable of being used on any aircraft, and not impair pilots’ visual acuity or the ability to correctly interpret cockpit displays.

“By constantly exploring new ways to maximize public participation, encourage incident reporting, enforce the law, and advance new technologies, our industry can do even more to safeguard air transportation in the United States and Canada against the needless threat posed by laser attacks on aircraft,” said Canoll.

Take the time to educate yourself and others about the safety risk that laser attacks on aircraft pose to passengers in the air and people on the ground. Remember, “If you see something, say something.” According to the FBI, thousands of laser attacks go unreported every year. If you have information about a lasing incident or see someone pointing a laser at an aircraft, call local law enforcement authorities.

The more data the FAA has, the better it can identify areas in which laser strikes are occurring to increase both public awareness and law enforcement in those areas. The FAA urges pilots to report all instances, and ALPA has made reporting a laser encounter very easy. ALPA’s “What to Do If You’re Lased” online pilot resource, accessible at www.alpa.org/resources, provides important response guidance for pilots to use during an attack and a brief form to complete to report the incident.