Our Stories: Endeavor Air Pilot Makes His Mark in the NFL

F/O Ryan Toma (Endeavor Air) has made a name for himself in professional football—without having played even one down as a professional player. Instead, the 32-year old CRJ900 pilot moonlights as a part-time groundskeeper for the National Football League (NFL).

NFL groundskeepers serve as both landscapers and artists for the league’s massive stadiums. Come game time, the league expects its playing fields to be in immaculate shape.

Most NFL groundskeepers are assigned to specific teams, but Toma belongs to a special crew that works unique events. This year he was assigned to tend the turf for two of the three season games at Wembley Stadium in London, England, as well as the Super Bowl, which will be played at Levi’s Stadium in San Francisco, Calif.

“For the London games, we work on Wembley as well as two or three practice sites,” explains Toma. To prepare for the New York Jets/Miami Dolphins game, played on October 4, he and other members of the designated crew visited two area professional rugby clubs—the London Irish and the Saracens. “We painted their game fields, using them as practice sites.” The crew then lined the turf at Wembley.

Toma was flying to London in preparation for the Detroit Lions/Kansas City Chiefs game on November 1 as this issue went to press.

All in the family

The Kansas City native’s NFL gig has been a family affair. His father, George, is a legend, having served for many years as the NFL’s head groundskeeper for Super Bowl games. Toma’s father was enshrined in the league’s Hall of Fame in Canton, Ohio, in 2002. George was also a Major League Baseball groundskeeper for the Kansas City Royals and provided his knowledge and skills for the Olympic Games held in Los Angeles in 1984 and Atlanta in 1996.

Toma says that he and his brothers Chip and Rick worked at stadiums with their father from the time they were little kids, and because of their work they traveled extensively.

To introduce American football to other parts of the world, the NFL in the mid-1980s began scheduling preseason games, known as “American Bowls,” in Japan, Mexico, and various cities in Europe. Toma, his father, and his brothers helped prepare the sod for many of these games.

When asked if traveling the world at a young age led him to pursue a flying career, Toma acknowledges it may have been part of the reason. “But to be honest, it was mostly because of the movie Top Gun,” he says with a grin. The airplanes in the film grabbed his attention, and he says he’s been hooked on flying ever since. 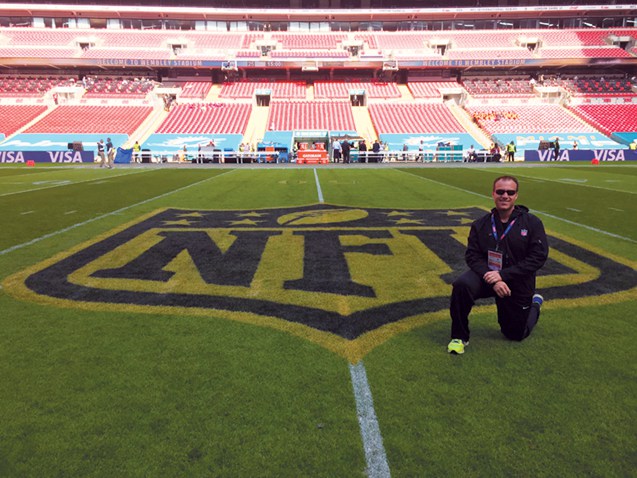 When asked about his most memorable NFL experience, Toma says that Super Bowl XXXII left an indelible mark. It was Jan. 25, 1998, and the Denver Broncos were playing the Green Bay Packers. He recalls, “[Denver quarterback] John Elway was on the one-yard line, and I was behind the end zone. It was the second quarter, and I remember the look of determination in his eyes.”

Elway proceeded to run the ball over the goal line for a touchdown. “It was one of those epic Super Bowl moments that I was right there for,” Toma acknowledges. The Broncos went on to win the game 31–24.

An ALPA member for the last eight years, Toma graduated from Kansas State and flew Aero Commanders for a local night-time cargo operation. He later worked for Mesaba Airlines, which became Pinnacle and then Endeavor Air.

Toma says working as a part-time groundskeeper for the NFL has been a lot of fun, but it’s been challenging to manage at times. The commitment eats up much, if not all, of his accrued vacation time. In addition, Delta Air Lines recently hired Toma, and he’s awaiting a class date. He realizes that being a new hire at Delta will give him less flexibility, but flying remains his priority.

If his flying career allows, Toma wants to continue working as an NFL groundskeeper. The league is like a family, he says, one he very much wants to remain a part of.

This article is from the November 2015 issue of Air Line Pilot magazine, the Official Journal of the Air Line Pilots Association, International—a monthly publication for all ALPA members.