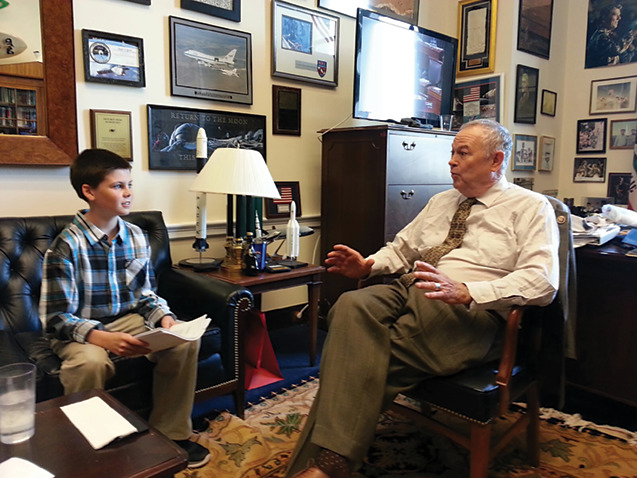 Elected members of Congress have a responsibility to answer to their constituents. So when Nick Morgan, the 13-year-old son of F/O Suzie Morgan (United), came to Washington, D.C., to talk about problems with the nation’s Open Skies policy, his House representative listened.

Nick, a Life Scout (the second-highest rank in the Boy Scouts of America), was working on his Citizenship in the Nation merit badge last spring. Among the requirements, he needed to visit a national landmark and write a letter to a senator or representative in Washington, D.C., about a national issue. The family was planning a vacation to Europe, so Morgan and her husband, Capt. John Morgan (Alaska), decided that they’d stop in the nation’s capital on their return trip. Nick could see the monuments and meet Rep. Dana Rohrabacher (R-Calif.), who serves the family’s congressional district. Nick and his family agreed that meeting face-to- face with their elected official would have more of an impact than writing a letter.

But what issue should Nick address? F/O Morgan, a B-777 pilot based in Los Angeles, and Nick had talked about Open Skies and how it’s an important issue for her because the unbridled expansion of Emirates, Etihad Airways, and Qatar Airways threatens her airline. They discussed how these three Persian Gulf carriers receive large, market-distorting subsidies from their governments, leaving U.S. airlines at a significant competitive disadvantage. So Nick decided that was the topic he wanted to address.

Since his parents are pilots, Nick’s fortunate that he gets to travel frequently and has actually flown on Emirates to Dubai in the United Arab Emirates (UAE). Having made the trek, he’s personally seen the airline’s expansive facilities at Dubai International Airport.

Still, Nick would need some assistance to help him effectively talk about the issue. Morgan contacted her pilot group’s Legislative Affairs Committee and spoke with F/O Joe Morowitz (United), who proceeded to send Nick ALPA’s 55-page white paper on the subject. He also spent an hour with the eighth grader, thoroughly discussing the issue and sharing tips on making a persuasive presentation. Morowitz wanted to make sure that Nick would feel comfortable walking into the elected official’s conference room. 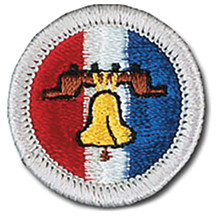 Nick got his first taste of Washington politics...and, in time, earned his Citizenship in the Nation merit badge—one of more than 30 he has attained in his pursuit to become an Eagle Scout, the Boy Scouts’ highest rank. Unfortunately, Rohrabacher has yet to support the Open Skies campaign, but Nick is hoping he’ll eventually see the light.

“I was very enthusiastic when I received the call to help Nick with this assignment,” said Morowitz. “Nick was incredibly well prepared. It’s a skill that I also learned in Scouts and carry with me to this day.” For such a meeting, Morowitz stressed, “preparation is half the battle.”

On May 20, Nick and Morgan entered the Rayburn House Office Building where they met Rohrabacher and his senior policy advisor. Nick spent 20 minutes explaining the current problems with the U.S. Open Skies agreements with the UAE and Qatar. The eighth grader talked about the request to U.S. Secretary of Transportation Anthony Foxx and Secretary of State John Kerry to open consultations, as permitted by the agreements with Qatar and the UAE, to fix this problem. Finally, Nick stressed that the situation, if left unchecked, could have a damaging effect on the entire U.S. economy.

Needless to say, the House representative, a former Boy Scout himself, was impressed. Nick was able to provide an intelligent and thorough briefing on the topic while also answering the congressman’s questions.

Nick got his first taste of Washington politics that day and, in time, earned his Citizenship in the Nation merit badge—one of more than 30 he has attained in his pursuit to become an Eagle Scout, the Boy Scouts’ highest rank. Unfortunately, Rohrabacher has yet to support the Open Skies campaign, but Nick is hoping he’ll eventually see the light.

As for the 13-year-old, will there be an airline cockpit in his future? “I’ve thought about it,” said Nick. Always the tactician, he added, “I’m definitely going to give it serious consideration.”

Join the Fight to Save Airline Jobs

Emirates Airline, Qatar Airways, and Etihad Airways have received more than $42 billion in subsidies and other unfair benefits during the past 10 years. These airlines are expanding rapidly into markets currently served by U.S. airlines and their partners. If left unchecked, this government-sponsored competition will cost U.S. airline pilots thousands of jobs in the short term.