Our Stories - Wake for Warriors: Pilot Gives Back to Wounded Vets

Combining philanthropy with a personal passion is often a combination for gratification and success. F/O Dave Deep (Delta), an avid water-sports enthusiast who divides his flying time between being an airline pilot and a reservist for the U.S. Marines, felt that he needed to do more with his life.

“Escorting medivac helicopters that were transporting wounded soldiers from the front line was a real eye-opener,” said Deep, who from 2003–2005 was on active military duty flying Bell AH-1W SuperCobras in Afghanistan.

Profoundly moved by the life-changing injuries he witnessed on a routine basis, he thought of a way to combine his passion for wakeboarding and wake- surfing for the greater good. “I wanted to provide an opportunity for those who could really benefit from just being out on the water.”

Now a lieutenant colonel with Marine Light Attack Helicopter Squadron 773, Deep contacted the Semper Fi Fund and other veterans’ affairs groups that help coordinate recreational opportunities for wounded vets. From his lakeside home in Cherokee County, Ga., he began bringing wounded vets and their families to Lake Arrowhead, just north of Atlanta, to introduce them to the joys of surface water sports.

He used his own resources to launch his boat, paying for the gas, providing the necessary equipment, and offering participants a place to stay. He introduced many of the wounded vets to water skiing, wakeboarding, and wake- surfing for the first time.

Deep is a firm believer in the therapeutic benefits of this kind of recreation, noting that water sports can be both recuperative and challenging. In wakeboarding, for example, amputees have to work with the resources available to them to be successful and, in doing so, learn something about themselves in the process. “All your troubles melt away, and you’re just out there having a good time in a beautiful place with awesome people,” said Deep.

Deep has since established Wake for Warriors, a not-for-profit 501(c)(3) organization. Having previously flown for AirTran and Atlantic Southeast, he solicited volunteers from his network of airline and military friends, also reaching out to the local community for support. Neighbors soon offered rooms in their homes, and a local restaurant even donated food. In time, Wake for Warriors added kayaks, water bikes, and stand-up paddle boards to the list of activities.

These days, individuals and families sign up for designated summer weekends. Working with four or five volunteers, Deep limits participation to less than a dozen per event. “I try to keep things as intimate as possible,” he said, adding that “by the end of the weekend, you have a new set of friends.”

“These veterans adapt so well to their injuries,” Morris noted, adding that working with them is truly inspirational.

And when the season ends in September, Deep reroutes wounded veterans down to the Gator Bait Wakeboard School in Miami, Fla., which operates as a business but makes special accommodations for military families as an extension of the Wake for Warriors program.

Deep remains personally engaged with Wake for Warriors to ensure that the familial feel he and his volunteers have worked hard to establish remains intact. Eventually, he hopes to add additional boats and possibly include a “Day at the Lake” event on nearby Lake Lanier to supplement his Lake Arrowhead outings.

You can help by visiting www.wakeforwarriors.org or the Wake for Warriors Facebook page and making a donation or buying a t-shirt. All proceeds pay for weekend events for participating veterans and their families. 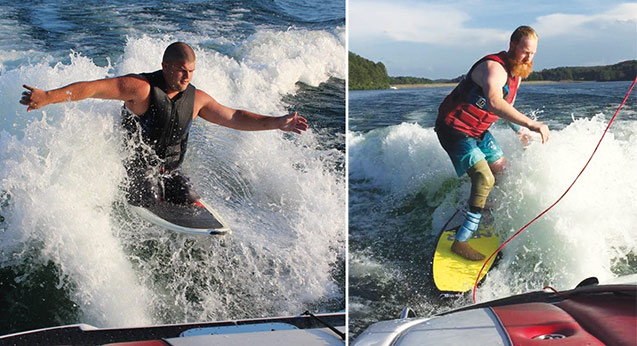