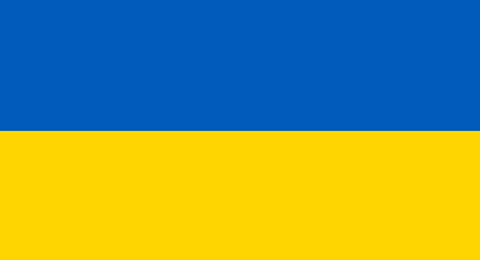 Since February 2022 when Russia launched its latest military invasion into Ukraine, many in North America—and around the world—have looked for ways to support the people of this besieged eastern European nation. Violence and ensuing atrocities have sent Ukrainian refugees fleeing by the millions to neighboring countries.

The response to help these war-zone evacuees as well as those who continue to “stand and fight” has been nothing less than extraordinary, with huge stockpiles of donated food, clothing, and other necessities being forwarded to frontline distribution centers. Medical personnel and other specialized volunteer groups continue to roll into the region to assist with providing aid and setting up makeshift camps—an unfortunate necessity of this conflict.

Supplementing ongoing military efforts to ensure that much-needed aid reaches its destination are ALPA pilots—flying for their carriers, establishing charitable enterprises, and even acting on their own to assist Ukrainians during this difficult time.

Because U.S. and Canadian regulatory agencies have banned flights to Ukraine and Russia in light of the ongoing turmoil, North American carriers are focusing their efforts on nearby countries like Poland to deliver donations and volunteers. According to the United Nations High Commissioner for Refugees, more than two million displaced Ukrainians have sought asylum there.

Several airlines have joined forces with charitable organizations to transport donated goods. FedEx Express has been working with Direct Relief, a U.S.-based humanitarian organization, to deliver goods to Poland. 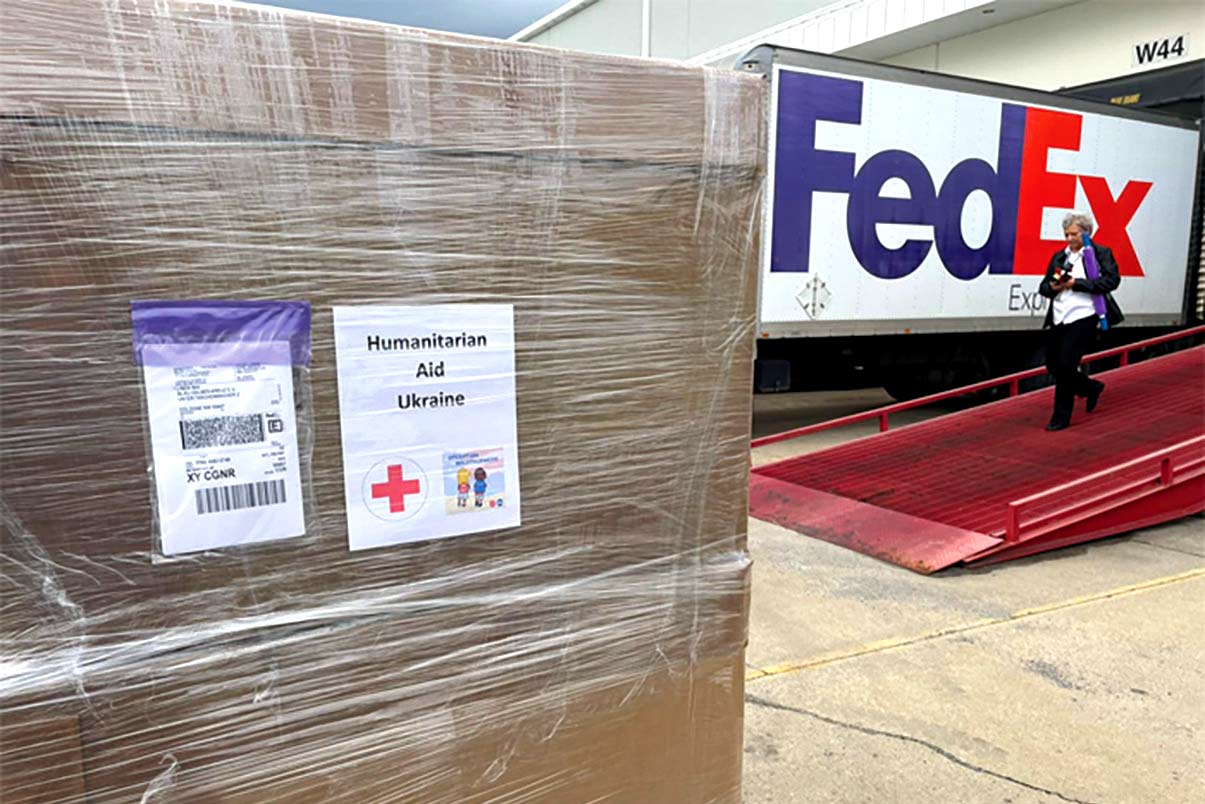 “The opportunity to fly the first FedEx Ukraine humanitarian-aid charter flight into Warsaw, Poland, was an honor and privilege,” said Capt. Jon Wooden (FedEx Express), who piloted a B-777 freighter together with F/O John Rayder (FedEx Express). The two worked with ground crews and numerous charities to make this trip a reality. “It was enlightening to see firsthand the amount of coordination involved and the commitment of so many behind-the-scenes people,” remarked Wooden.

The aircraft used in this operation originated in Memphis, Tenn., before making a stop in Cologne, Germany, where Wooden and Rayder boarded the airplane and flew it to Warsaw on March 27. While the two confronted several logistical delays, the flight eventually took off and continued to the Polish capital without incident.

In all, Wooden and Rayder delivered 76 tons of critical medical supplies, including an emergency field hospital donated by the state of California. The aircraft also transported trauma and wound-care treatments, chronic disease medicines, oxygen concentrators, and other vital medications and equipment. After unloading their cargo, the crewmembers flew the B-777 to London Stansted Airport. “Despite being a long day, the experience was extremely rewarding,” Wooden shared.

Other ALPA members have worked to develop local outreach efforts during this international crisis. Pilots and family members of Cologne, Germany-based FedEx Express Local Executive Council 123 have banded together with local United Parcel Service pilots and their families to stuff backpacks with essential items for Ukrainian children currently staying at the city’s refugee center.

Shortly after the first 50 backpacks were delivered to the center on April 6, this collective effort was restructured as the nonprofit 501(c)(3) organization Operation Backpack4Kids (backpack4kids.org). During its brief tenure, Backpack4Kids has expanded its operations with the help of the Red Cross and generated such a remarkable response that it’s now delivering backpacks to refugee camps in Poland and western Ukraine as well. As Air Line Pilot went to press, Backpack4Kids reported that more than 500 donors have donated more than $80,000 to this worthy cause.

Capt. Mike Farrell (JetBlue) found a unique way to directly contribute to Ukraine’s national defenses. Farrell, who also serves as president of Smart Firearms Training Devices in Tempe, Ariz., manufactures training weapons with patented safety devices for recently enlisted military and law enforcement personnel. Farrell communicated with the Ukrainian National Patrol Police before traveling to Poland in March, where he delivered the first 30 systems. To date, more than 100 units have been sent to help the thousands of civilians now acting to protect their county, many of whom may have never previously held a gun.

“The infrastructure to train in Ukraine for this kind of activity has been severely degraded by the ongoing war,” observed Farrell. “With these devices, they can now train in a basement or subway station, posting targets on a far wall—this is how you pull the trigger, line up the sights, exchange a magazine. This kind of flexibility is becoming more and more important as cities get sealed off.”

In addition to these and other ALPA pilot activities, carriers like Delta and United have established fundraising campaigns, enabling passengers to contribute accrued miles from airline rewards programs to fly aid workers and supplies to the areas in and around Ukraine. In late April, WestJet announced a partnership with the FlightHub Group to transport GlobalMedic’s field team members to and from areas impacted by the Ukrainian conflict. In addition, six of the carrier’s aircraft currently feature decals positioned under the captain’s window displaying the Ukrainian flag as a visual reminder of the country’s plight.

One of the most remarkable accounts of ALPA pilots helping Ukrainian refugees is that of Capt. Michael “Brett” Anderson (United). While on a 48-hour layover in Amsterdam, the Netherlands, the weekend of March 19, the B-767 pilot purchased a round-trip ticket on KLM Royal Dutch Airlines and flew to Krakow, Poland. “My job as a pilot is risk assessment,” Anderson commented, adding, “I assessed the risk and saw that there was no immediate threat or danger and decided to go.”

Anderson rented a minivan and drove to a nearby supply center where he packed the vehicle with donated goods. He and a local contact then drove to a refugee camp in Hrebenne, Poland, not far from Lviv, Ukraine, where they distributed the items.

The decision to use Anderson’s extended layover to provide this service wasn’t by chance. “I asked the local news station in my town to help me find contacts in Poland, and they did a short story on it, which helped me net a few,” said Anderson, prior to leaving the United States for this trip. He noted, “If this works out, I hope to get some time in the future to go back and help more.”

Not content with simply delivering the goods, Anderson took his personal humanitarian relief effort one step further. While on this excursion, he learned about another van currently in Ukraine, which would need to be driven across the border into Poland. Those who possessed the vehicle couldn’t transport it because Ukrainian men ages 18–60 are banned from leaving that country, in anticipation that they may be called upon to fight. Agreeing to help, Anderson and his contact traveled on foot, somehow convincing border guards to let them cross into Ukraine.

The two walked to the designated location in Ukraine, where they stood around a bonfire chatting with a group of volunteers in their 20s in below-freezing temperatures, waiting for the vehicle to be delivered. “I was so impressed with the resilience and bravery of these people,” Anderson remembered. “They’re fighting for their homeland and their families, and yet they remained upbeat.”

In short order, the van appeared and the two returned to Poland in it. Anderson spent that night at a local guest house. The next morning, he drove five displaced Ukrainians in the original van to the train station in Krakow before returning it and flying back to Amsterdam. The ALPA captain finally checked into his layover hotel with 16 hours to spare and got some much-needed sleep. The next day, he flew his scheduled trip from Amsterdam Airport Schiphol to Washington Dulles International Airport.

Talking about the wide range of support agencies and charities working to provide relief for the Ukrainian people, Anderson highlighted the efforts of the World Central Kitchen (wck.org). “They were actively working there to help refugees and volunteers,” he recalled, adding that he could see the evidence of their efforts. “In fact, they fed me,” he commented.

These are just some of the stories of ALPA pilots who continue to support the Ukrainian people in their effort to defend their homeland against an invasion that has brought about enormous suffering and widespread destruction. And the Association’s members continue to engage in this effort in a host of ways—in the name of freedom—to aid this global neighbor in need. 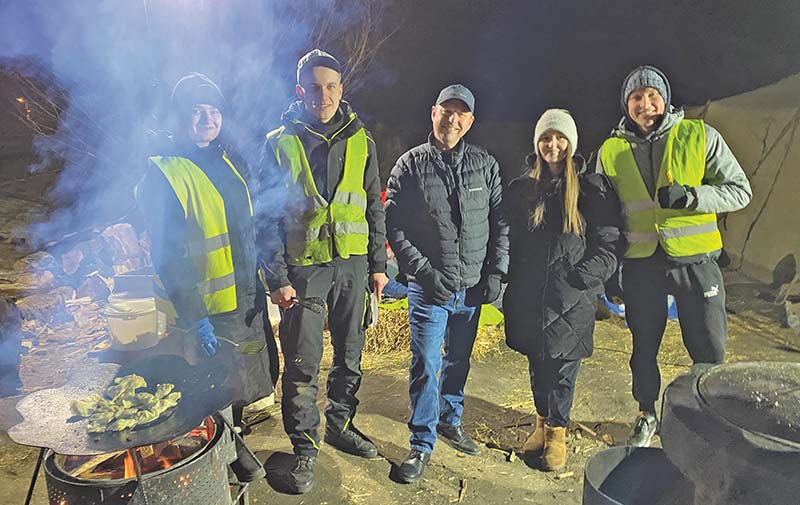