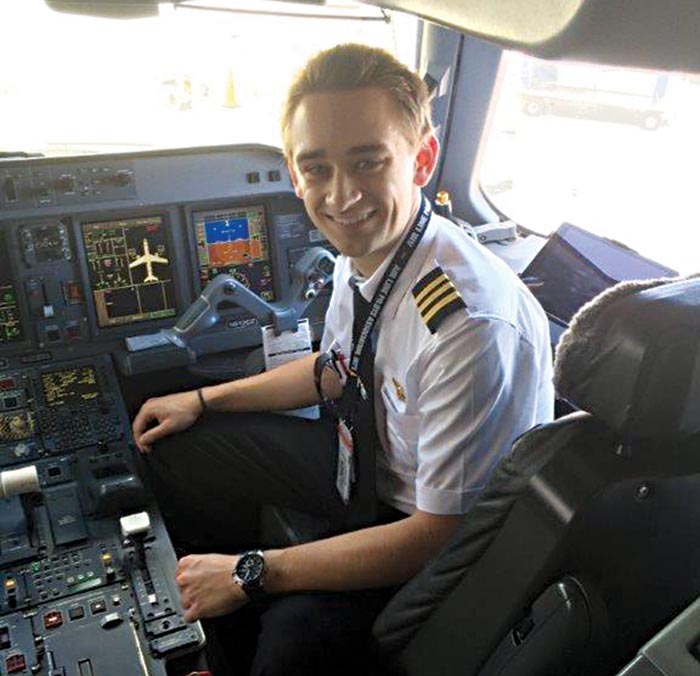 “While I was growing up, my mom was a travel agent and we got to travel on a fairly regular basis,” recalled Scott Singleton. “Whenever we went on a family vacation, I always looked forward to the flight more than the trip itself....Even before I decided to become a pilot I have always loved flying. I always loved to sit near the wing and watch the flaps, ailerons, and spoilers throughout the flight.”

That love of flying might be hereditary. “My mom also was a flight attendant for Wien Air Alaska before they went out of business and long before I was born,” he said, “so flying is in my blood!”

Singleton stated that 9/11 had little to no effect on his choice to become an airline pilot. “I was young when 9/11 occurred,” he said, “and I did not fully understand at the time how 9/11 would change the airline industry forever. As I got older, I began to understand more and more how the events on that tragic day changed aviation—but not once did I ever question my choice to become an airline pilot.”

That didn’t stop others from questioning him. “I have always been asked about terrorism and why I still wanted to fly,” he admitted, “and I always responded saying that I was born to fly and I would help make the skies safer.”

Singleton interned for United before starting his professional career and learned a more personal side of the tragedy as well. “I met many people, including friends of Capt. Dahl, who told me their stories about 9/11 and how the tragedy affected them,” he explained. “Those are the memories that will stick with me for the rest of my life.” And the scholarship, he said, “gave me a sense of duty to do my part in making sure Capt. Dahl’s legacy continues to live on.”

Singleton started his college career at Embry-Riddle Aeronautical University in Daytona Beach, Fla., and transferred after one year to the Prescott, Ariz., campus. “The Captain Jason Dahl Memorial Scholarship was one of the first scholarships I was awarded in my college career,” he said. “I was elated when I was chosen as a recipient. My parents and I worked very hard to pay for college and for me to live my dream and become an airline pilot, so this scholarship meant I could get one step closer to my goal.”

The scholarship was positive in many others ways, too. “This scholarship also meant becoming a member of a community,” he said. “The 9/11 tragedy brought hundreds of people together to support each other and to make sure the events of that day were not forgotten, and most importantly to also ensure the legacy of the fallen continues to live on in the next generation of airline pilots. After I was awarded the memorial scholarship, I was introduced to members of this community—a community to share stories with, offer mutual support, and friendship. This scholarship also gave me a sense of duty to do my part in making sure Capt. Dahl’s legacy continues to live on.”

Singleton followed in his mother’s footsteps after college, flying in the Alaska bush for Ravn Alaska (formerly Era Alaska). He was hired by Compass Airlines in February of this year, where he works hard to make sure he continues the legacy of Capt. Dahl. “Capt. Dahl was a mentor and teacher to his fellow pilots and he wanted to bring out the best in everyone,” he said, expressing his hope to, “like Capt. Dahl, teach and mentor my fellow pilots and help make the industry better for everyone.”