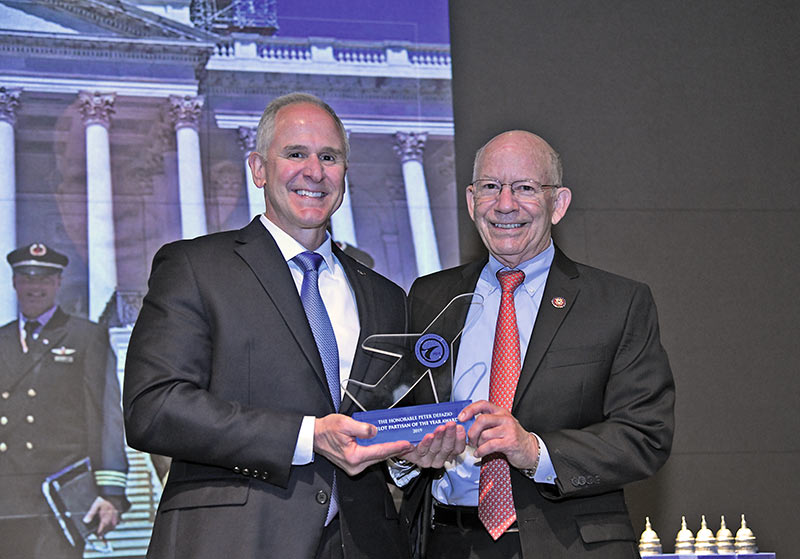 Air Line Pilot sat down with the Honorable Peter DeFazio (D-OR), who represents the 4th Congressional District of Oregon, to talk about his efforts to promote airline safety and his work as chair of the House Transportation and Infrastructure (T&I) Committee. DeFazio was the recipient of ALPA’s Pilot Partisan of the Year Award in 2019.

1. When the 117th Congress concludes, you say good-bye to a long and illustrious career in public service. What inspired you to run for the House of Representatives and what’s motivated you to stay?

Rep. Peter DeFazio: As a young staffer in the office of my predecessor, Rep. Jim Weaver, I would watch congressional hearings, and, to be honest, I didn’t think members were asking good questions. I thought I could do better and so I ran. Having the chance to make positive change in the lives of my constituents and people all around our country has been a tremendous privilege and an honor. It’s been the pride of my life to serve Oregon, and I will be forever grateful for the trust the people of the 4th Congressional District put in me.

2. You’ve been at the forefront of making aviation safer for passengers and airline workers, leading the charge decades ago to ban cigarettes on airplanes. What do you remember most about that time?

DeFazio: Banning cigarettes on airplanes was one of many big aviation fights. It also took me nearly a decade to get rid of the FAA’s “dual mandate” to both regulate safety and promote commercial aviation, which I always saw as a conflict of interest. It was only after the ValuJet crash in 1996 that my amendment to the FAA reauthorization bill succeeded in stripping the promotional authority from the FAA and having the agency’s focus be regulatory.

3. Fast-forward, and the airline industry and the flying public still count on you to improve the aircraft environment and prevent catastrophic fires on board. Your leadership made the air transport of lithium batteries safer despite immense opposition. Why the pushback?

DeFazio: The biggest impediment has been the Pipeline and Hazardous Materials Safety Administration and its coziness with industry representatives who strongly oppose the regulation of lithium cells and batteries and other dangerous goods. The agency worked to combat FAA safety proposals at International Civil Aviation Organization meetings and within the Department of Transportation. I’m happy the FAA Reauthorization Act of 2018 included provisions on lithium-ion batteries, but we can do more to ensure the safety of aircraft from fires.

4. You’ve been at the helm of the T&I Committee during an unprecedented time: a government shutdown, the B-737 MAX crashes, and the pandemic. Airline workers owe you a debt of gratitude for passing three rounds of job-saving, historic support via the payroll support program. How were you able to achieve this precedent-setting legislation?

DeFazio: The pandemic impacted every economic sector—and the aviation industry was no exception. In early 2020, we were faced with a complete shutdown of air travel, obviously an untenable situation for airlines. What we did in response was to ensure that the focus was on the workers affected by this crisis. That’s why we called it “payroll” support. The result was the most proworker relief package in the history of the country, and I was proud to lead its passage. There’s no doubt in my mind that we’d be in a much worse situation if we hadn’t protected aviation workers.

5. What’s been your proudest achievement as chair of the T&I Committee?

DeFazio: My committee’s investigation of the B-37 MAX crashes. I knew we needed to get to the bottom of whatever was happening at Boeing that could have allowed these crashes to happen. I’d just taken over the gavel in 2019, and I told my newly created investigations and oversight team that this was what we were focusing on. Almost a year and a half later, our report was released and immediately breathed life into negotiations for an aviation safety reform bill. Democrats and Republicans, both in the House and Senate, took one look at our report and said that we needed to take action. Later that year, we passed certification reform on a bipartisan basis, and I firmly believe our skies are much safer as a result.

6. You’ve been the most vocal supporter for fair opportunities for U.S. airline workers in the global aviation marketplace for decades. ALPA is grateful for your leadership in attempting to stop foreign airlines from using flag-of-convenience business models to create a global race to the bottom for workers’ wages, benefits, and working conditions. What’s the outlook regarding preventing the outsourcing of U.S. aviation jobs and enfranchising U.S. aviation labor rights?

DeFazio: When Norwegian Air International first came on the scene several years ago, I led the fight in the House to stop it and its business model from taking root in the United States. Norwegian was “Norwegian” in name only. It operated under an Irish air operator’s certificate, employing crews on short-term contracts governed under Singapore law. Without action by the federal government, these models are guaranteed to multiply at the expense of American workers. We’ve seen the decimation of the maritime industry as flags of convenience have taken root over the last half century. That can’t happen in aviation.

This is why I’ve introduced the Fair and Open Skies Act numerous times. It seeks to end this slippery slope of giving the U.S. stamp of approval to flags of convenience in international civil aviation. Currently, the bill has strong bipartisan support with 157 cosponsors. While we’ve faced some challenges in advancing the bill in the House, addressing this threat to aviation continues to be one of my top priorities before this Congress concludes.

7. With several FAA reauthorization bills under your belt, your role in each of them resulted in significant improvements for airline workers and passengers, notably the Airline Safety and Federal Aviation Administration Extension Act of 2010, which included pilot training and qualification reforms that have improved U.S. passenger airline safety by 99.8 percent. Looking ahead to next year’s FAA reauthorization, what are the top issues and what are your concerns as you won’t be overseeing this important legislation?

DeFazio: From the rise of new entrants, such as drones and advanced air mobility, to decarbonizing the aviation sector to 5G, numerous new issues have emerged in recent years that will need to be tackled in the next FAA reauthorization bill. And a number of critical congressional mandates, such as secondary barriers and flight attendant duty and rest time, included in the 2018 bill still have yet to be implemented. I wouldn’t have felt comfortable retiring if I didn’t think there was a new generation of extremely passionate and capable leaders ready to take up the baton from me. I’m confident I’m leaving the committee in very competent hands. The quest for the highest level of aviation safety never ends, and I know leaders on Capitol Hill, in the administration, and within the aviation industry are going to keep working to deliver that on behalf of the American people.

8. ALPA is growing our pilot advocate ranks. What is the role and importance of constituent advocacy and engagement?

DeFazio: I think it’s extremely important. My colleagues may not always want to hear what Peter DeFazio thinks on a given issue, but when that message is coming from a group of pilots from their state, it can carry a lot of weight. I always encourage everyone to get engaged, stay engaged, and push for the positive change they want to see. You can’t get what you don’t ask for!

9. The T&I Committee has historically been able to get work done on a bipartisan basis, and this has certainly been the case under your leadership even during this time of hyperpartisanship. What are your future hopes for the committee and for Congress?

DeFazio: Our committee has a proud tradition of bipartisanship that I was honored to be a part of. The aviation certification reform bill, the Water Resources Development Act, and the Ocean Shipping Reform Act are some recent examples of this committee’s bipartisan track record during my time as chair. It’s my sincere hope that bipartisanship will remain the norm for the T&I Committee for years to come.