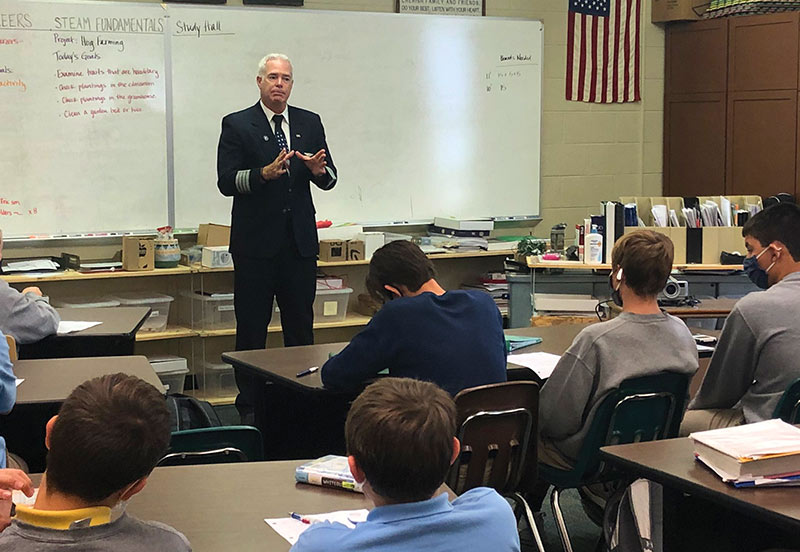 Capt. Rich Odbert (FedEx Express) talks to science, technology, engineering, art, and math class students about his career as an airline pilot and about the aviation industry.

Editor’s note: This column showcases the efforts of ALPA pilots who volunteer their time and talents to advocate for the union’s priorities and the cadre of knowledgeable and passionate staff specialists who support them.

In 2018, the Aviation Jumpseat Group was elevated to the fourth pillar of the Air Safety Organization (ASO). The group’s mission is twofold: enhancing safety and security by providing access to the cockpit jumpseat to qualified crewmembers and defending pilot-in-command authority over flight deck access by ensuring that use of the jumpseat isn’t abrogated or undermined in any manner or under any circumstances.

Capt. Rich Odbert: Coming from a small rural town, the only airline turboprops and jets I’d seen were those of the original Frontier Airlines that made multiple stops along the Platte River, back and forth to Billings, Mont.; Omaha, Neb.; and Denver, Colo. They ran the “River Run,” which was also part of the original transcontinental contract airmail routes. Occasionally, my dad would fly as a passenger out of Lee Bird Field in Nebraska—notable for being the first “lighted” airfield in the country—when departing and arriving after dark. It was lit with burning oil drums that were set on fire when the airmail pilots radioed in for a stop.

When I was kid, you could stand outside along a four-foot-high chain-link fence at the airport and watch and wave as your loved ones embarked from the terminal.

I felt an emotional rush and sense of power when the captain would fire up the engines. It was old-school aviation and very exciting technology for a young boy.

My first introduction to actually flying was through my oldest brother, Mike, a private pilot, when he rented a Cessna and flew out from Boulder, Colo. He had earlier sparked my interest in flying by making me memorize the four forces of flight.

Odbert: My first introduction to ALPA was through the acquisition of Mountain Air Express by Air Wisconsin Airlines. After becoming an ALPA member and actively working through a successful merger, the airline operations needed to be coordinated. Line pilots’ direct observations from the outstations were invaluable to the new senior management and decision-makers in order to enhance operations. I envisioned and created the Operational Oversight Committee, which worked directly with senior management to find ways to better serve our passengers, other airline employees, and flight crews with enhancements to safety and efficiency. The work of the committee was very well received by both ALPA and management.

3. What are your roles and responsibilities as ALPA’s Aviation Jumpseat chair?

Odbert: An average of 60–70 percent of pilots commute, but the privilege is extended to every airline pilot for travel. The rules surrounding jumpseating took an entirely different turn after 9/11, and I’ve been privileged to be involved with those changes since then. Access to the jumpseat is so important to line pilots, and the scope of my responsibilities has grown to working closely with industry and government stakeholders, law enforcement groups and threat-awareness specialists, other ASO groups, various ALPA committees, and the International Federation of Air Line Pilots’ Associations. My primary duty is to ensure that ALPA pilots are represented in all issues related to the jumpseat, and I work with many dedicated pilot volunteers. Together, we’ve created the “No Pilot Left Behind” campaign and many other invaluable jumpseat resources, including jumpseat provisions for Known Crewmember® and the Cockpit Access Security System.

Odbert: Because of COVID-19, this past year has been without a doubt one of our most challenging and productive in ALPA history. A vast team of pilots and professional staff have responded on a daily basis to the challenges brought about by the pandemic. So much of the work that’s gone on behind the scenes, led by our senior officers from the top on down, is truly remarkable. The actions taken on behalf of ALPA members are very complex and encompass the entire airline industry—including challenging regulators and operators for immediate action as well as providing a vast network of resources to help pilots and their families. Under the direction of ALPA’s national officers, the Association’s staff members are supporting everything from crafting language sent to the FAA to working on workspace environment cleaning and health measures.

Specific to my group, during the pandemic we’ve had to focus on ensuring that temporary labor agreements maintain our necessary jumpseat access privileges, inasmuch as the regulators will allow. In addition, during this time when fewer pilots have been traveling, we’ve been working to enhance the jumpseat portion of ALPA’s mobile app to better serve pilot needs as they return to work. At the direction of Capt. DePete, the Aviation Jumpseat Group, in conjunction with the IT and Communications Departments, has developed the “Flight Finder” feature that’s now available as part of ALPA’s mobile app. This search tool gives pilots the ability to determine the most efficient way to reach a destination, even if the routing requires various connections and airlines. This tool is a game changer and will quickly help locate jumpseats even as their use surges once pilots return to work (see “Groundbreaking ALPA Jumpseat Flight Finder Now Available”).

Odbert: First, choose a field you’re interested in and passionate about. As a career commuter, getting to and from work in a timely and rested manner is very important to me. This led to my interest in jumpseating and, more importantly, protecting the privilege for those who earned it. It’s about getting home to your loved ones and families, maximizing your “downtime,” and returning to work refreshed. It’s also about giving back to the aviation industry by being an additional onboard safety and security asset. Pilots are never passengers on airplanes, and the pilot-in-command knows of every jumpseater on board.

Second, familiarize yourself with the expectations and responsibilities of the position. The ASO’s Aviation Jumpseat pilot subject-matter experts have been developing the new Jumpseat Education Training (JET) initiative that will soon be available to give incoming jumpseat volunteers a foundation for success. A combination of history, expectations, training, and ongoing initiatives are vital to ensuring proper pilot representation.

Third, we live in an age of an expectation of immediate gratification. Because of the type of work ALPA does, this isn’t always possible due to required government and regulatory processes. Pilot volunteers must exhibit patience and continued unwavering pilot advocacy to see things to completion.

Fourth, get your family or significant others prepared for a 24/7 on-call position. Family support is a must when doing ALPA work.

And lastly, make yourself part of a team, not a committee of one. Every good captain knows they’re not a “single pilot.” Strength is found in numbers, and success is ensured through teamwork. This includes working with ALPA’s professional staff members. They have vast historical and practical knowledge, and taking advantage of their talents is crucial to ALPA’s ongoing success.

Being an airline pilot is a complete and total lifestyle. You don’t leave your responsibilities behind when you leave the cockpit, and you hold yourself to a high standard of expertise. The same applies to being an ALPA pilot volunteer as well.