On the Road: Frontier Pilot Motorcycles the World

Capt. Bob Dolven (Frontier) beside Andiamo in front of Wat Rong Khun, or White Temple, in the Chiang Rai province of
Thailand.

The adage that it’s not about the destination, it’s about the journey holds a special meaning for Capt. Bob Dolven (Frontier). What began as a motorcycle tour of the United States during a two-month hiatus from airline flying in 2009 quickly morphed into a decade-long odyssey across the globe. His mode of transportation was a 2004 BMW 1150GS nicknamed Andiamo, which means “let’s go” in Italian.

Dolven used those initial 60 days to embark on what he called a “Kindness Quest.” Heading east from his home in Phoenix, Ariz., he crisscrossed the country, performing daily random acts of kindness. “At tollbooths, I paid for the car behind me,” he said. “I did laundry for an elderly woman. I landscaped an entire yard for an underprivileged family. The list goes on.”

Having had such a positive experience, Dolven decided to extend his motorcycle trek south to Mexico and Central America. When it came time to fly a trip, he’d park his bike at a location near an airport and catch a flight home. He continued his foray into South America and in 2011 reached the Tierra del Fuego province in the southernmost tip of Argentina. Considering his options, he decided to go global with his biking expedition, making arrangements to ship the motorcycle from South America to England.

In 2011, Dolven toured western Europe before traveling into the nations of North Africa the following year. He then ventured into eastern Europe and the Middle East. Throughout this time, he would periodically suspend his extended ride to return to the states and continue his career as an airline pilot. Fortuitously, he always seemed to find a location to safely house his motorcycle.

“In Lima, Peru, I valet parked it in a five-star hotel parking lot,” Dolven remembered. He later left the bike at Dracula’s Castle (Bran Castle) in Romania’s Transylvania region. Many individuals he’d just met were more than happy to make room in their garages. In all, Dolven successfully found 56 parking spots, adding, “BMW shops were particularly accommodating.”

He ventured into Asia in 2014, taking several years to travel though countries like Thailand, Japan, and North Korea before continuing to the Pacific’s Oceania region. However, the COVID-19 pandemic eventually ended these adventures.

Dolven confronted all kinds of weather and terrain during his travels and had more than his fair share of exciting encounters. In Ecuador, he had a chance meeting with some friendly members of the Jivaroan tribe, including a man wearing a University of Montana sweatshirt. Touring their community, Dolven learned that the group hunts with blowguns and poisonous darts and celebrates the deceased with the practice of shrinking heads. 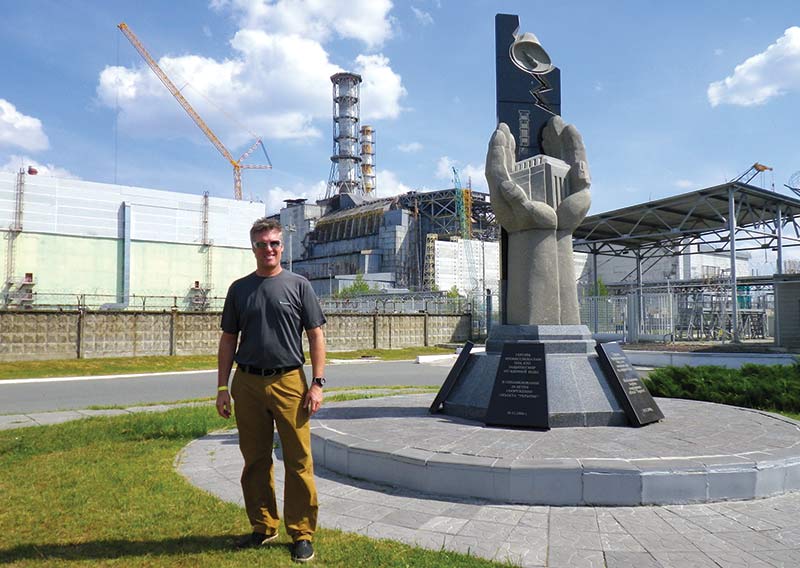 Dolven beside a monument near the fourth reactor of the Chernobyl nuclear power plant in northern Ukraine dedicated to the workers who died there in 1986.

While in Algeria, he swapped flying stories with an Arabic gentleman who flew Russian MiG-29s in the Algerian Air Force. Dolven also recalled how he choked down small portions of curdled yak milk and chicken feet, not wanting to offend a gracious Mongolian hostess. Many of these anecdotes are captured in the photos and videos he’s posted on social media.

In 2014, Dolven had an experience that made him particularly glad to be an American. While crossing the Caspian Sea from Azerbaijan to Kazakhstan on the cargo ship Carag Carrav, he encountered a couple of Georgian passengers. Unhappy with the status of the Russo-Ukrainian War, they threatened him because of U.S. support for the other side. Dolven used a satellite communications system to contact the closest U.S. Embassy, which eventually interceded to secure his safety.

Despite this particular altercation, the 20-year Frontier pilot was struck by the remarkable kindness people extended to him on his trek. “The friendly, accommodating nature of the locals was a common theme throughout my experience,” Dolven said. In these distant lands, his reputation often proceeded him and he fondly remembers those “who identified me simply as ‘that motorcycle guy,’ who bent over backwards to help me complete what would become the next

Capt. Bob Dolven (Frontier) documented his decade-long escapades in the book Andiamo Full Circle: A Round-the-World Motorcycle Adventure, which is available on Amazon.com. His motorcycle, which eclipsed more than 77,000 miles from 2009 to 2019, is currently residing in Christchurch, New Zealand, and will be on exhibit at a nearby museum beginning early next year.