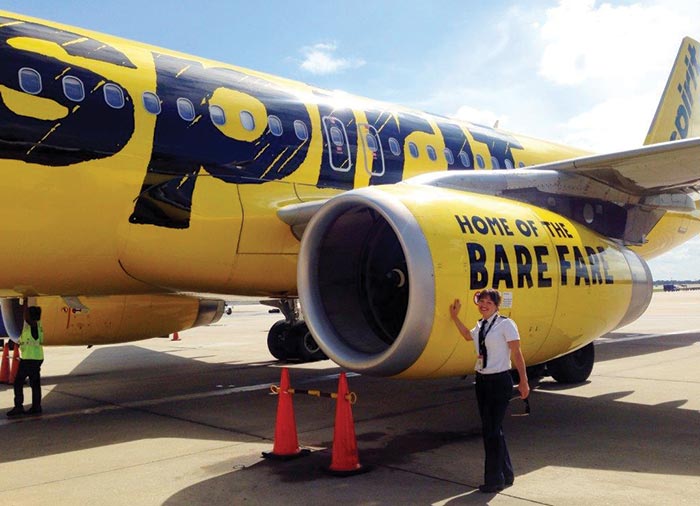 “My parents would take my little brother and me to Fleet Week in San Francisco every year,” Michelle Bush recalled. “I was fascinated with the Blue Angels.” That’s what started the spark for her.

Bush was a junior in high school on 9/11. “I had zero idea what a horrible lasting effect it would have on the industry,” she said. “All I saw were the lives lost, and the entire country coming together in support of those in need.” But she also saw a country united and unbroken. “My strongest memory of 9/11 is the immediate rise to action to help those in need. The country came together and opened its arms to anyone in need.”

Her path to the cockpit wasn’t easy. “I knew nothing about the field, had zero family to guide me, so I went at it blind,” she admitted. She chose San Jose State University (Capt. Jason Dahl’s alma mater) because of their aviation department and never regretted it. “The support and guidance I received confirmed that I was where I should be,” she said.

Even then it was a struggle—an experience many likely will recognize. “I worked three jobs while attending SJSU full time,” she recounted. “I lived at home to save money for flight training. I applied for every single scholarship that I could. Every summer, I would take the money I saved during the school year and drive to a little flight school in Arizona to get another rating.”

So the grant she received from the Capt. Jason Dahl Scholarship Fund was extremely helpful. “Without such amazing organizations such as the Dahl Fund, my path would have been much harder,” she said. “Funds like this not only help with the heavy financial burden, but almost equally important give students the feeling of belonging. Being awarded a scholarship such as this is an honor and is such a confidence boost to students to encourage them on their journey.”

After college she started off with a Cessna Caravan operator before latching on with Great Lakes. After a tour with Frontier, she said, “I switched to Spirit and absolutely love it.”

Bush now has a front-row seat in the continuation of the legacy, as she was invited to join the Board of Directors of the Dahl Fund a year ago. “My favorite part of being a board member is reading the essays from the students,” she said. “It brings back memories of my own sparkle for aviation and it’s so exciting to see that same passion in the newest generation of pilots.” And she says of the growing number of scholarship recipients, “It is a unanimous opinion that Jason would have been so proud that such good came from such a horrific event.”