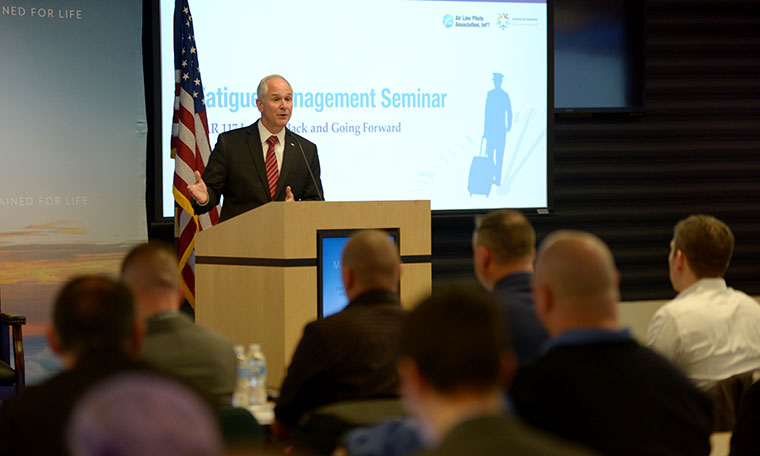 Capt. Joe DePete, ALPA’s president, discussed the role that fatigue played in the founding of ALPA during the “Fatigue Management: Looking Back and Going Forward” conference held at the Association’s Herndon, Va., Conference Center in late January.

More than 100 pilots from 27 ALPA pilot groups, along with fellow pilots and airline industry representatives, gathered for the “Fatigue Management: Looking Back and Going Forward” conference at ALPA’s Herndon, Va., Conference Center on January 23–24. The event, cohosted by ALPA and Airlines for America, brought together industry stakeholders to discuss the implementation of U.S. flight-time/duty-time rules under FAR Part 117. Due to the partial government shutdown taking place at the time, representatives from the FAA and the National Transportation Safety Board were unable to attend.

Opening the two-day conference, Capt. Joe DePete, ALPA’s president, remarked, “Pilot fatigue has always been a core issue for ALPA. When pilot pushing was commonplace, the safety risk faced by the first pilots was one of the reasons our union was founded. We’ve spent a lot of time and resources to ensure that the regulations are realistic in expectation and reasonable to line pilots.”

Capt. Brian Noyes (United), ALPA’s Flight Time/Duty Time Committee chair, observed, “We’ve adopted Part 117 pretty well as pilots in the five years since the rule became effective. Nearly all the issues have been worked out, with only a few letters of interpretation issued by the FAA—about six a year. But we can find new ways to improve our understanding and make the rules work better for pilots.” He noted that data is now available regarding how pilots operate within FAR 117 and that the information can be used to build predictive models to improve the system.

Opening a panel discussion titled “Identifying Fatigue Safety Risks—Are Our Current Safety Nets Doing the Job?” Andy Cebula, Airlines for America’s vice president of NextGen and new entrants, highlighted many of the issues surrounding fatigue and the rulemaking process, noting, “We have to stand as an industry when we look at fatigue management in order to balance everything that we need to consider.”

“The regulation is working,” said F/O David Currier (American). “While it does place a high level of responsibility on individual crewmembers, the concern that the company doesn’t need to apply reasonable thinking and rules to the operation hasn’t materialized for us.”

Capt. Doug Marchese (JetBlue) observed, “One of the biggest challenges regarding our fatigue program at JetBlue is trust. The company has to trust that a pilot is going to make the ‘fatigued’ call only when he or she absolutely needs to. And we’re actively working with the company through data collection and error analysis to take what we’ve learned to reduce the instances in which a pilot calls in fatigued.”

In a panel titled “Mitigating Fatigue Safety Risks—Post-FAR 117 Data Toolboxes at Work,” Capt. Jim Mangie (Delta), an original member of the Flight Time/Duty Time Aviation Rulemaking Committee (ARC), noted, “We’re just now beginning to get into the data and to use analytic toolboxes to prevent problematic trips in order to reduce issues with day-of fatigue calls.”

Capt. Andy Riggs (United) shared a personal experience regarding the early difficulties in data collection, recounting, “Initially we were surprised at the lack of reports. But once we fostered trust in the system, we began to receive good data and started to notice trends on particular pairings. Using that data, we adjusted the trip, which resulted in a cost to the company. Since the adjustment was backed by data, the company was receptive and cooperative and implemented the changes because of the safety value.”

“When data and analytic tools are used, they provide powerful insights,” said Capt. Pat Hagerty (FedEx Express). “Better still, the data collected can show management the real story of fatigue in pilots. We’ve created programs to reduce sleep loss, and we’re looking to do even more. Fatigue risk management systems are working to find the perfect combination of numbers, science, and techniques. And we have so much more to explore.”

“Part 117 doesn’t and can’t cover every situation—and yet as pilots, we want black and white, not gray,” said Mangie. “It’s easy to forget that in the years before FAR 117, it was legal to fly 16 hours in a 24-hour timeframe. Part 117 was a regulation that was written on the basis of theory. Now we have experience, and I think some areas can be improved on.”

“The data shows that extensions are rare, about a half of a percent,” said Heather Provost, senior manager of fatigue risk management systems at American Airlines. “And most of those ended within a half hour of the original time. While you can’t factor for every situation, such as weather or other delays, the numbers of extensions are fairly consistent.”

“As pilots, we all know that, at the end of the day, there are a lot of things going through our minds,” said Capt. Steve Smolek (United). “And at the top of that list is the question ‘Am I fit for duty today?’ This same process has to be applied to any requested extension. There are a lot of pressures a pilot may face, but United has been very good at getting data in the hands of pilots as to why an extension is needed. And if or when the time comes and we decline the extension, there’s a ‘no harm, no foul’ attitude toward us, and it works well.”

Actions after a fatigue call

“Pilots want to fly, not call in fatigued,” said Capt. Omri Porath (Endeavor Air), “and companies are doing a good job of recognizing this and treating us appropriately because no one wants a fatigued pilot in the cockpit. However, pilots also have a duty, when they do make that call, to provide data to the company so that in the future another pilot won’t be in the same situation and need to make a similar fatigue call on a similar trip.

“At Endeavor,” noted Porath, “we just changed our fatigue program, attempting to eliminate the word ‘reject’ from review committee consideration. We’re hoping this change will encourage our pilots to make fatigue calls, if needed, without the worry of possible discipline.”

“The definition of fitness for duty is a simple one,” Noyes observed. “It’s whether or not you should be in that cockpit and flying the plane. Pilots need to do their operational due diligence before every flight and be mindful of their preparation for duty. Fitness for duty and fatigue aren’t that different.”

“We have several plans of actions we use to help our fatigued pilots,” said Capt. Scott Hutchinson (Southwest). “For instance, we may have a pilot deadhead two or three legs to get his or her circadian rhythm in sync again. Data shows that putting the pilot immediately into a rest period may be the worst thing because it slows the return to fitness for duty. But every situation is unique, and we’re learning more and creating better plans every day.”

In a panel discussion titled “Five Years of FAR 117 in Review,” Noyes noted, “While it’s not unusual to have changes and interpretations to a regulation over time, we generally knew the intent and spirit behind the change. With Part 117, however, I think there’s been a loss of the general knowledge and reasoning behind the decision made by the original ARC, and things may have drifted in the five years since implementation.

“All the nuances these interpretations have created make it very hard for us to track our own legality within the regulation, which leaves pilots relying on the company to provide the actual numbers on our duty hours and tell us if we’re approaching the need for an extension,” added Noyes. “The system should be simple so that pilots can do this themselves very easily.”

This article was originally published in the March 2019 issue of Air Line Pilot.