Executive Board Assesses Industry Challenges, Prepares for Board of Directors Meeting 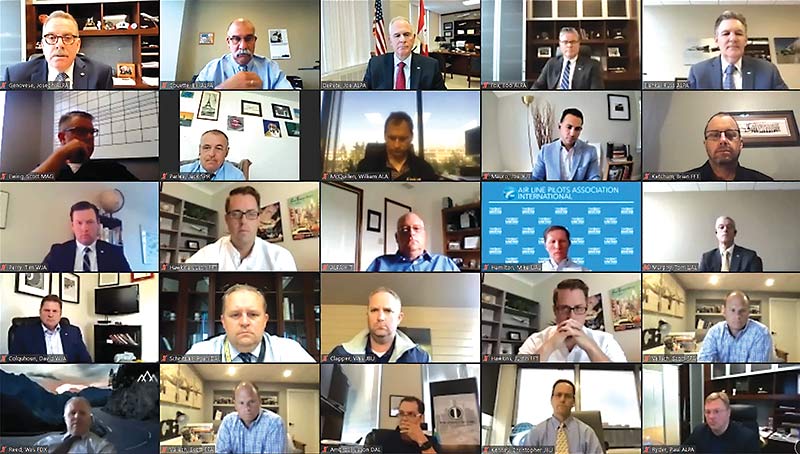 ALPA’s Executive Board convened via video conference on September 9 for its 127th regular meeting to conduct the business of the union and prepare for the Association’s upcoming Board of Directors (BOD) meeting. The virtual gathering, the second of its kind for the Executive Board this year, also featured two special presentations: a commemoration of the life and work of Capt. Andy Hughes (Mesa) and a farewell tribute to ExpressJet Airlines, recognizing its pilots and their many contributions. Following roll call and preliminary announcements, the meeting began with national officer reports.

“ALPA pilots have had our share of blows during this pandemic and the resulting economic downturn, and we likely have more coming,” said Capt. Joe DePete, ALPA’s president, in his opening remarks. “But I’m here to tell you that we always get back up again. We simply will not accept defeat.” DePete employed a boxing metaphor throughout his speech, emphasizing that the organization won’t allow current setbacks to deter its nearly 90-year mandate to be the voice of the airline piloting profession. Continuing with the comparison, he added, “Defeat is only declared when you don’t get back up again.”

In his report, ALPA’s president spoke about the Association’s Calls to Action, giving particular attention to the CARES Act and the union’s ongoing campaign to extend the act’s payroll support program through March 31, 2021. He highlighted the 300,000-plus letters and e-mails to Congress and the additional 110,000-plus tweets that ALPA members have sent to their Members of Congress. He also discussed the Association’s campaign urging the Canadian government to provide additional resources after the Canada Emergency Wage Subsidy expires. Both measures are needed to help airlines in North America recover from the effects of the current global health crisis.

In his presentation, Capt. Bob Fox, ALPA’s first vice president and national safety coordinator, observed that since the Executive Board last met, “I’ve witnessed the continuous, nonstop work of the Association at both the national and master executive council [MEC] level as we address the far-reaching, harmful effects this pandemic has had on every aspect of our industry, our profession, and our lives.” He noted that from early on, ALPA recognized the need for mandated aircraft cleaning and sanitization standards as well as personal protective equipment for pilots and notification in the event of a COVID-19 positive employee or passenger test.

Fox discussed ALPA’s Air Safety Organization and how the Association’s Pilot Peer Support and the other pilot assistance programs are available to help members during these difficult and stressful times. As a member of the NextGen Advisory Committee subcommittee, he highlighted ALPA’s efforts to oppose the FAA’s planned implementation of RNAV approaches that, when applicable, would require pilots to fly parallel approaches without a fully coupled precision approach capability. He also commented on the FAA’s recent airworthiness directive for the B-737 MAX and efforts to return Known Crewmember® to its original effectiveness.

“The COVID-19 pandemic continues to disrupt airline operations,” said Capt. Bill Couette, ALPA’s vice president−administration/secretary, in his report, adding that “more than 11,000 of our members have received announcements of job displacements, and more are expected.” Providing an example of the havoc wreaked by the global health crisis, he commented, “At ExpressJet alone, every pilot has been issued a WARN Act notice,” noting that the airline would close its operation on September 30. “The ExpressJet pilots, and all our members, need to know that their union stands with them during this difficult time,” he continued.

Couette outlined the many resources available to displaced members through ALPA’s Furloughed Pilots Support Program, a component of the Professional Development Group’s Membership Committee (see “Furlough Resources: ALPA Is Here to Help You Navigate the Curves Ahead” in the August 2020 issue of Air Line Pilot). He highlighted the availability and need for the continued support of Pilots for Pilots, ALPA’s emergency relief fund, particularly in the wake of Hurricane Laura, which struck several southeastern states just two weeks before the meeting. Couette also noted the preparations and logistics under way for what will be the Association’s first-ever virtual BOD meeting, which takes place October 19–21.

In his presentation, Capt. Joseph Genovese, ALPA’s vice president−finance/treasurer, focused on how the pandemic has impacted ALPA from a financial standpoint. “As of today, we’re financially sound and are able to provide our members with the vital resources they need,” he remarked. “I’ve never been prouder to be a member of the ALPA pilot leadership team. We all lean on each other, our pilot volunteers, and our staff to be judicious with our members’ dues dollars as we supply them with the critical services and resources they need right now, and as we continue to prepare for the mounting challenges that remain ahead.” (See “Weighing In” in the August 2020 issue of Air Line Pilot.)

Genovese discussed ALPA’s current monthly dues revenue, observing that the Association’s revenue remains at or slightly above what was originally budgeted. He added that the nature of the pandemic has helped keep costs down, noting, as an example, that holding many of this year’s functions as virtual events has helped limit expenses. Genovese pointed out that ALPA’s Major Contingency Fund, a strategic resource available to ALPA groups confronting extraordinary circumstances like elevated endgame contract negotiations and bankruptcy filings, had a balance of $96.4 million as of July 31.

In their reports, the four national officers each welcomed the pilots of PAL Aerospace as the newest members of the union. The Canada Industrial Relations Board certified ALPA as the collective bargaining representative for the pilot group on July 22.

The Executive Board’s plenary session featured two special presentations recognizing ALPA members. The first was a moving tribute to Capt. Andy Hughes (Mesa), his pilot group’s most recent MEC chair, a previous Association executive vice president, and an adept union leader who recently lost his battle with cancer. DePete eulogized the Mesa pilot acknowledging, “Capt. Hughes’ dedication meant he engendered the kind of respect that is earned as a result of battle scars, not given only because of rank. As testament, Jonathan Ornstein, Mesa Air Group chairman and CEO, despite being a longtime adversary at the bargaining table, was among the many who visited Andy recently.”

In a late agenda item, DePete called for a vote to nominate Hughes for the David Behncke Lifetime Achievement Award, which recognizes ALPA members who, during the course of their careers, make extraordinary contributions to the Association, its members, and trade unionism.

The Executive Board’s second presentation addressed the announced shutdown of ExpressJet Airlines and its impact on more than 1,400 ALPA members. The carrier that flew exclusively as part of the United Express network reported on August 24 that it would cease operations after United selected CommutAir as its sole ERJ 145 operator. ExpressJet announced that it would close its doors on September 30, the day financial support from the U.S. government’s CARES Act payroll support program ended.

DePete observed, “ExpressJet’s wind down brings to an end an airline that has long been a leader in the regional airline industry, and a pilot group that has shaped and strengthened our union in extraordinary ways.” He added, “We expect to see each of you back in the skies soon. And until then, we’ll be behind you with all the support that ALPA’s more than 63,000 members can provide.”

Following a video paying homage to the ExpressJet pilots, F/O Joe Mauro (ExpressJet), his pilot group’s MEC chair, addressed the Executive Board. “The outpouring of support from all of you—my fellow MEC chairmen, the national leaders, and ALPA staff—has been more than we could have imagined during this time of need,” he remarked.

“While it hasn’t been easy to cope with the shutdown of our airline, both personally and as chairman of the group, I look back on my tenure with thankfulness, being able to serve such a great group of pilots,” acknowledged Mauro. “And I know our pilot group will be forever thankful of the opportunities they were offered, experiences they had, and, most importantly, the memories we’ve all made along the way.”

The Executive Board voted to update the Association’s policy on aircraft autorecovery systems, which was last revised in 2005. The policy change is to ensure that these systems (e.g., ground proximity autorecovery, automatic emergency descent, and autoresponse to traffic collision avoidance system resolution advisories) are developed and implemented with input from ALPA’s subject-matter experts and that such systems don’t lead to a degradation of safety or a reduction in the flight crew complement. In addition, the flight crew must be able to, at all times, override in a timely manner any autorecovery system.

ALPA is adamant that requiring two or more experienced, well-trained, and well-rested flightcrew members is essential to maintaining operational safety.

Other Executive Board business covered the review and approval of reports in preparation for ALPA’s upcoming BOD meeting from the union’s Collective Bargaining, Flight Time/Duty Time, Education, Leadership, Membership, Retirement & Insurance, and Strategic Planning Committees as well as the Air Safety Organization.

The MEC chairs passed a resolution directing ALPA’s governing body to recommend to the BOD that the jumpseat structure be included within the description of the Air Safety Organization in the union’s Constitution & By-Laws. The Executive Board authorized an Operating Contingency Fund grant to the Sky Regional MEC. The board also recommended to the BOD to consider whether there should be a change to the Constitution & By-Laws that would permit ALPA to continue to exempt dues from being paid on Section 401(a)(17) excess cash payments made by employers over the maximum contribution cap in pilot 401(k) retirement accounts as part of the dues adjustment process.

In addition, Executive Board members were briefed on adjustments to the eight delegate–committee structure for the union’s strategic planning to be conducted at the BOD.

ALPA’s Executive Board is made up of the Association’s 35 MEC chairs, and its four national officers and nine executive vice presidents serve as ex-officio members.

View the presentations from ALPA’s national officers during the September Executive Board meeting.

In honor of Hughes’ lifelong mission to encourage aspiring aviators, F/O Andy Eccles (JetBlue), a former Mesa pilot who benefitted from Hughes’ guidance and friendship, has established the Andrew J. Hughes Memorial Aviation Scholarship Fund, which will sponsor annual education scholarships to assist students pursuing careers in aviation. “Andy made the request that I set up a fund for him to continue to advocate for pilots,” said Eccles. “This time, Andy wanted to help with the costs for the next generation of pilots.” In the words of Hughes: “With each new pilot brought onto the property, a new voice is added.”