Building TEAMS for Unity and Success

Plus, Lessons Learned from Boots on the Ground 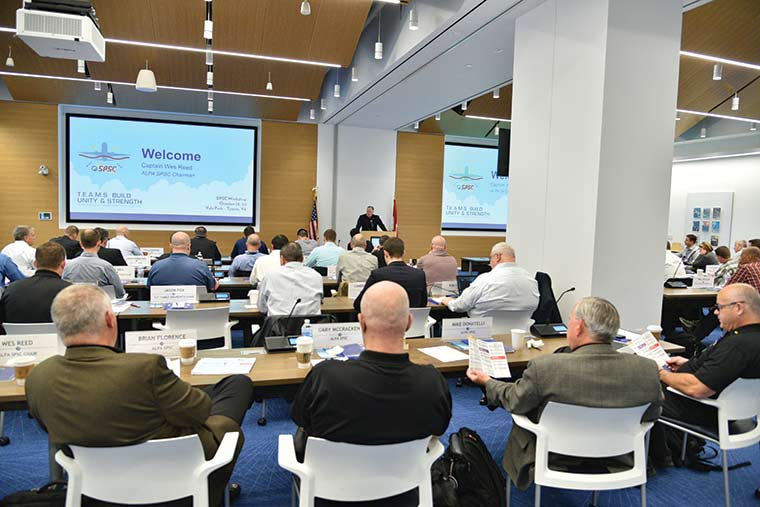 That’s how DePete welcomed 55 pilot leaders from 15 pilot groups at ALPA’s Strategic Preparedness and Strike Committee (SPSC) Workshop, held in McLean, Va., on October 28–30. Led by the national SPSC and Capt. Wes Reed (FedEx Express), its chair, the pilots discussed how to Train, Execute, Adapt, Motivate, and Succeed (TEAMS) within the SPSC and ALPA structure by using strategic planning and the union’s team approach to accomplish pilot groups’ goals.

“No master executive council [MEC] strategy is implemented or SPSC campaign executed without a team,” Reed said. “The goal is to have cohesive messaging achieve the required impact on your members and help generate support for your Negotiating Committee at the bargaining table—all to attain a ratifiable, timely contract.”

Reed and Capt. Mike Donatelli (Delta), an SPSC member, joined Andrew Shostack, assistant director of ALPA’s Representation Department, in training participants on the strategic planning process. Then Donatelli and Capt. Brian Florence (United), an SPSC member, discussed how ALPA’s team approach supports the plan and emphasized when best to engage using the OODA (Observe, Orient, Decide, Act) loop, which enables the SPSC of individual pilot groups to adapt quickly to events that might change the course of the plan.

“An SPSC should act like a think tank, going through ‘what if’ scenarios and examining the company, industry, pilot, and negotiations dynamics to create uncertainty to achieve leverage. That’s the job of an SPSC and its programs—Family Awareness and Pilot-to-Pilot,” said Donatelli.

“You can’t reach your goals without a plan,” said Bruce York, ALPA’s senior advisor and chief negotiator. York joined Capt. Ronan O’Donoghue (Alaska), his pilot group’s SPSC chair, in describing how the Alaska pilots have benefited from the strategic planning and unity building process by sharing the plan with the pilot group.

Pilots participated in hands-on interactive breakout sessions to explore the various tactics ALPA pilot groups use to achieve their goals, including lessons learned from the most recent campaigns at ExpressJet, Frontier, JetBlue, and WestJet.

Capt. Tyler Hawkins (Frontier), his pilot group’s former SPSC chair and current ALPA executive vice president, shared the Frontier pilots’ strike bus story. “The mobile strike center idea was born out of the Denver real estate market being completely cost prohibitive,” Hawkins said. “Once our MEC made the decision, we quickly secured ALPA’s support. And from idea to RV purchase, it was only five weeks.” In the end, the strike bus served as a pilot unity builder, a mobile billboard, and a money saver as compared to setting up a traditional strike center. (During media interviews leading up to the deal, Frontier management often referred to the strike bus as a “PR stunt.” According to Hawkins, the first thing Frontier CEO Barry Biffle said after the pilots signed the contract was, “What are you going to do with the bus?” The answer? Ask the Delta pilots.)

Capt. Brian Dawson (JetBlue), his pilot group’s SPSC chair, shared his experience with using rallies to build pilot unity and train JetBlue pilots on how to conduct themselves during their first-ever informational picket (how to hold the sign, what to wear, how to move, etc.). “We wanted to ensure that our pilots were ready,” Dawson said. And the response? There were 700 JetBlue pilots at company headquarters in New York City during their informational picketing event.

Frontier pilots held several informational picketing events. One of the most successful was at Frontier’s new headquarters—as investors arrived they had to cross a line of pilots to enter the building. “The only thing our company cares about is looking good for the investment community,” Hawkins said. “We wanted to disrupt that story while sharing our own.”

Since a major newspaper ad can be expensive, the Association encourages pilots to consider social media advertising instead, which ALPA has successfully used in several recent campaigns, starting with the Hawaiian pilots’ negotiations in 2016. Spending a tenth of the traditional newspaper ad cost for its entire campaign, Frontier pilots integrated this powerful tool, which garnered more than 1.3 million interactions with various target audiences.

It also changes how the Association engages traditional media around SPSC events, especially depending on the media market. JetBlue pilots holding an informational picket in New York City saw much better return on social than traditional media. “I wanted our event to be out in the public,” Dawson said. “We found that you won’t get the media coverage you once did, but you can make your own press with a much better targeted audience.”

Throughout the workshop, pilots discussed how ALPA supports the SPSC structure through the Strategic Member Development & Resources Department working in close coordination with staff in the Communications, Finance, Legal, and Representation Departments. The workshop also included helpful tips on influencing and targeting audiences, available IT tools, and SPSC event planning.

While most pilots attending the workshop were first-time participants, one-third were experienced SPSC leaders who value learning about new available tools and want to maintain strong ALPA relationships and mentor new volunteers.

“One of my goals in attending the workshop was to learn from others who built and led effective Pilot-to-Pilot programs,” said F/O Drumil Trivedi (Endeavor Air), his pilot group’s Pilot-to-Pilot chair. “I’m grateful for all the guidance others shared, especially United. You just don’t get that kind of a connection via an e-mail or phone call.”

For more information about the SPSC and how to get involved, contact ALPASPSC@alpa.org.

Capt. Evan Cullen, president of Irish ALPA, was a guest speaker at ALPA’s Strategic Preparedness and Strike Committee (SPSC) Workshop. He motivated attendees with stories of the Ryanair pilots’ struggle for a fair contract across several countries, 90 pilot domiciles, and 28 different EU labor laws. Cullen stressed that the Ryanair antilabor, atypical employment model isn’t going away. In fact, its next destination will be a low-cost, long-haul airline: “Every pilot leader should be concerned.”

After a Q&A session, Capt. Wes Reed (FedEx Express), ALPA’s national SPSC chair, said, “We need to keep educating pilots about the Ryanair pilots’ plight, maintain a vigilant eye on the industry throughout the world, and continue to fight situations like these with all of our collective might.” Cullen ended by thanking ALPA for its support, saying, “Your union is the single biggest support in combatting Ryanair and Norwegian, and you should be very proud of your union leadership.”

Pilots who attended ALPA’s Strategic Preparedness and Strike Committee (SPSC) Workshop heard from the Association’s Government Affairs Department about how they can amplify ALPA’s voice and pilot engagement on Capitol Hill through the union’s Calls to Action and donations to ALPA-PAC. At the beginning of the conference, 72 percent of participants already were contributing to the PAC; by the end of the meeting, all pilot SPSC workshop participants had become PAC supporters. “This is a remarkable achievement,” said Capt. Joe DePete, ALPA’s president, as he congratulated and thanked the group. “A strong PAC is by far the most effective method we have of making connections and sharing our union views with top government decision-makers who impact our industry and the profession.”