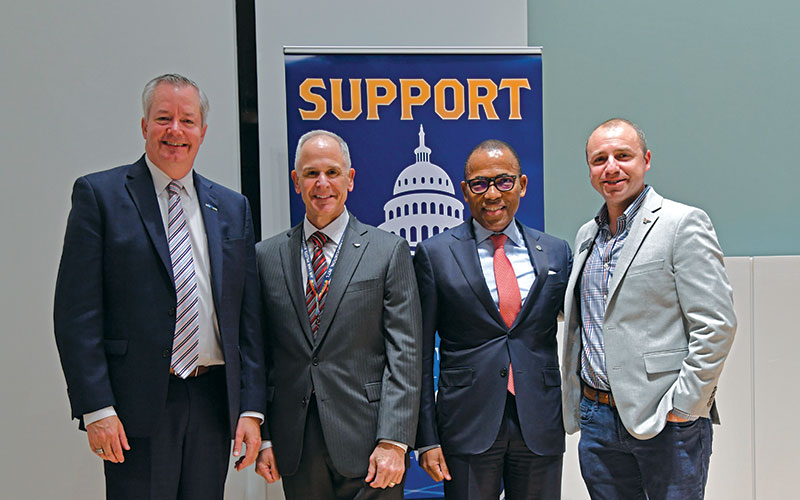 The National Gay Pilots Association (NGPA) held its fourth Aviation Inclusion Summit at ALPA’s McLean, Va., offices November 2–3, bringing together more than 100 attendees from the aviation industry to raise awareness for diversity, equity, belonging, and inclusion initiatives that foster a safe and welcoming working environment for all pilots.

With a theme of “Inclusion as a Paramount Ingredient to Aviation Safety,” the summit’s goal was to share that awareness across all aspects of the aviation industry. The event brought together ALPA and non-ALPA pilot leaders, ALPA committee leaders, government officials, aviation management personnel, human resources specialists, aviation advocacy groups, and others to share best practices, tools, and resources.

Capt. Joe DePete, ALPA’s president, welcomed attendees to the event, reminding them that “not only is inclusion the right thing to do, but it contributes to safety.” He stressed the need for open communication within the industry, noting, “Ensuring inclusivity in our pilot workforce and a sense of belonging for every airline pilot and aviation worker increases unity on the flight deck and in our profession.”

F/O Brian Gambino (JetBlue), NGPA’s president, highlighted the organization’s 32-year history as well as the genesis of the Aviation Inclusion Summit. “This event was born out of necessity,” he said. “The industry needed an event that brought to light items that were not open to all.” Gambino referred to the summit as both “an event for learning and an event for awakening.… It’s an event that makes all of us better for being here.”

Nolen observed that the FAA is “working diligently” to eliminate barriers to entry, such as removing antiquated language in the agency’s communications to be more inclusive and representative. “Meaningful change takes courage,” he said, “and I applaud this forum for your courage.”

Both Gambino and DePete also acknowledged that more progress must take place. “It may seem that we’re progressing just at a glacial pace,” Gambino observed, “but we must keep progressing,” while DePete noted, “So much work has been done, but so much more remains. We’re going to do this together; you have a voice in ALPA.”

The summit included main sessions and a number of breakout sessions designed to allow attendees to focus on specific issues of interest to them or their organizations.

Dr. Quay Snyder, ALPA’s aeromedical advisor, discussed topics such as transitioning, women’s health, mental wellness, and sexual harassment/assault. He highlighted policies that affect the LGBTQ+ community and the progress being made to improve those policies. Snyder also reminded ALPA pilots about the Association’s Pilot Peer Support program and how it can provide assistance when needed.

Capt. David Pettet (American), a former NGPA president, provided a demonstration of one of American Airlines’ latest training modules regarding the concept of upstanding. “You can be a bystander when you see or hear something wrong,” he explained, “or you can stand up and say something and be an upstander.” Speaking up to offensive and inappropriate language or action provides for a better pilot culture, which leads to increased safety.

Breakout sessions included hands-on discussions about the legal, financial, professional, and aeromedical issues surrounding the transgender community; unconscious bias and how it can affect actions and impressions; underrepresentation in the airline industry; becoming a better ally; why diversity and inclusion are important in crew resource management; and the FAA’s efforts with inclusive language.

Each breakout provided an in-depth look in the specified area and how inclusivity is paramount to aviation safety.