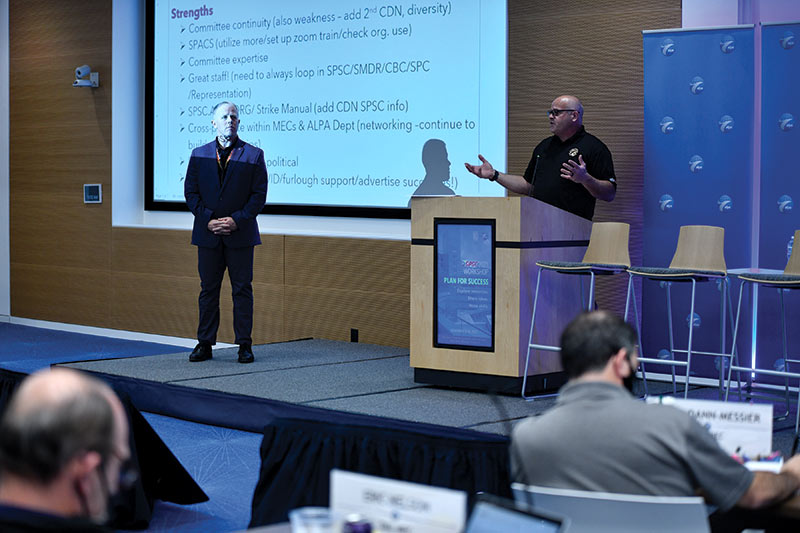 During ALPA’s Strategic Preparedness and Strike Committee (SPSC) Workshop held November 8–10, 63 pilot volunteers from 15 pilot groups, participating both in person and online, discussed the importance of creating and executing a plan to capitalize on unity in support of achieving pilot group goals.

“Union membership among airline pilots is significantly higher than that of any other profession in the private sector,” said Phil Comstock of Lescault and Waldeman, Inc., in a stirring presentation during the workshop held at ALPA’s McLean, Va., offices. Well over 90 percent of pilots in the United States and Canada are unionized.

Comstock, who’s conducted extensive polling for ALPA and many of its pilot groups, explained that growing union membership among pilots at a time when unionization has shrunk in other professions distinguishes pilots from other workers. He noted that they’re also “the only union members whose solidarity and commitment to collective bargaining always increases as a response to adversity.” That’s why SPSC work is so crucial. Effective SPSC efforts leverage pilots’ involvement in the negotiating process to produce bargaining power.

It Starts with a Plan

To make a positive difference in our collective futures, “We must have a plan. We must marshal our resources. And we must train our replacements,” stressed Capt. Wes Reed (FedEx Express), ALPA’s SPSC chair and a Group A executive vice president, who led the workshop.

Reed and Andrew Shostack, assistant director of ALPA’s Representation Department, reviewed the strategic planning process. Capt. Sean Creed (Spirit), an SPSC member and Group B-1 executive vice president, and Reed engaged participants in a SWOT (strengths, weaknesses, opportunities, and threats) exercise, demonstrating how it applies to SPSC work. Capt. Brian Florence (United), another SPSC member, joined Creed in enumerating the steps for building a master executive council (MEC) SPSC plan. Participants then broke into two groups, one creating a “timeline-based” plan to support negotiations, the other an “event-based” plan to support a merger.

ALPA’s pandemic response served as the backdrop for Capt. Joe DePete, ALPA’s president, who addressed the group and panels on crisis planning and the SPSC’s role in MEC response plans.

DePete illustrated the achievements of ALPA’s collective action to address the pandemic’s impact, saying, “We successfully made the argument that pilots are essential workers.” As a result, ALPA helped obtain $63 billion in pandemic relief directly for U.S. aviation workers. In addition, ALPA MECs—backed by experienced staff—negotiated more than 150 letters of agreement and memorandums of understanding to mitigate furloughs and protect pilot health and financial security. He also discussed the various challenges on the road to recovery and shared his perspectives on the value of pilot unity—the cornerstone of SPSC work. “We’re ALPA pilots first and foremost. A focus on our commonalities is the key to success.”

From the outset, “We were able to act quickly because ALPA is so engaged on all fronts,” Ryder said. The Association’s national officers, national committee representatives, department directors, and other subject-matter experts communicated on a constant basis. Government Affairs utilized data collected by the SPSC to target outreach to legislators, social media campaigns, and Calls to Action to involve pilots and bring attention to the adverse effects of the pandemic on their lives and livelihoods. The coordinated effort also included launching a website with real-time information, expanding the DART program to all ALPA pilots to answer their questions, and activating the Furloughed Pilots Support Program.

This holistic approach was one of the main takeaways for Capt. Javier Ramos-Green (JetBlue), his pilot group’s SPSC chair. The pandemic caused his group to take an all-hands-on-deck stance. “We learned that we should always have an active SPSC to be able to adapt quickly to all situations so that we aren’t taken by surprise.”

Two examples highlighted innovative tactics SPSCs used to engage members despite the limitations that COVID restrictions placed on MECs’ ability to interact with their pilots.

The Alaska pilots’ SPSC organized a successful RV Unity Tour to raise awareness about contract negotiations. The committee used ALPA’s Strategic Preparation and Communications System to identify locations for Family Awareness events. Pilot-to-Pilot volunteers then took the RV to these events, meeting pilots and their families in a fun, informal setting.

The WestJet pilots’ SPSC conducted a virtual picket in response to Swoop airlines taking over the pilots’ Toronto, Ont., base. With little time to react, they made picket signs, deployed base captains in various cities, contacted pilots via phone tree, and coordinated with airport authorities. The result: more than 560 pilots made a powerful show of unity and support for their MEC in a picket spanning the country. 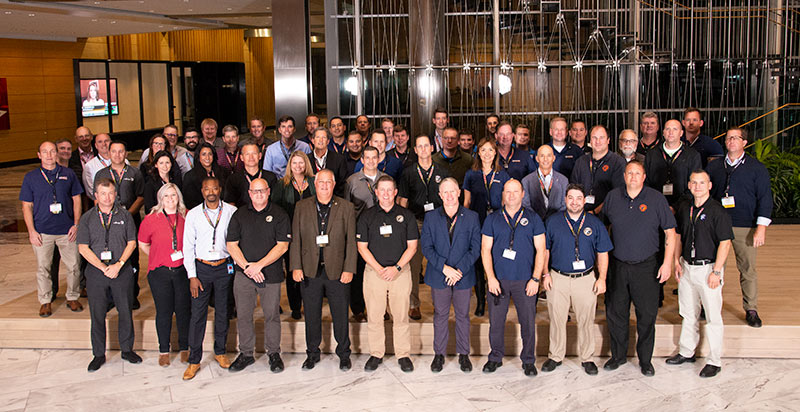 A Force Multiplier for Positive Change

Throughout the workshop, participants gained insight into the “pilot personality,” practiced techniques to influence and manage differences, and learned about building relationships with outside groups to garner support for their cause and how to use social media to advance strategic priorities. They were also trained on the financial resources, communications tools, and support available to them in carrying out their work.

Capt. Patrick Pietrzak (WestJet Encore), his pilot group’s MEC chair, enhanced his understanding of what’s involved in the union, especially in the context of SPSC work. “In my role, having an overall picture is the basis for a plan of action that allows us to be prepared for what’s next.”

The workshop was an ideal forum for SPSC volunteers to connect and strengthen their ALPA network. F/O Christina Thomson (WestJet), her pilot group’s SPSC chair, experienced the benefit of that firsthand: “The support we received from the other ALPA volunteers was overwhelming,” she said.

Capt. Mike Donatelli (Delta), another ALPA SPSC member and the committee’s first chair, joined Florence and Creed to review ALPA’s SPSC history and reinforce how SPSC efforts can be a force multiplier in affecting positive change. Today, four generations of pilots—many of whom haven’t gone through a full negotiating cycle—share the flight deck, underscoring why ALPA must educate its members about the union’s esteemed and resilient history. “We stand on the shoulders of giants—pilots who made sacrifices and endured hardships to secure a strong profession for future generations,” Donatelli said. “It’s our turn to get involved and make our mark collectively.”

In reflecting on why pilot volunteers do SPSC work, Reed echoed that sentiment, saying, “This is a group that wants to make a difference. Behind every pilot is a family, a support group. You’re part of that family now. And future generations of pilots will depend on the legacy that we and our fellow pilots create today.”