Remembering the Fallen on 9/11


Speaking to a virtual audience of pilots, family members, friends, and staff, Capt. Joe DePete, ALPA’s president, opened the livestreamed ceremony in the Remembrance Garden at the Association’s offices in McLean, Va., on the morning of September 11.

“As we come together in spirit for this ceremony, many of us can recall the fear and anger that cut across our society when the United States was attacked on the morning of Sept. 11, 2001,” DePete remarked.

“On that day and those that followed, some in our world allowed that fear they felt to become hate. But airline pilots instead led a transformation: we sought to turn society’s fear into hope—a hope that still moves us forward today,” he continued. “To paraphrase a sentiment that Martin Luther King, Jr. expressed in 1956, ‘Let no human pull you low enough to hate them.’ While the struggle Dr. King described was far different than 9/11, the counter to fear and hate was the same. Rather than allowing ourselves to be pulled low, airline pilots pushed higher—toward the greater good that has formed our focus since our industry’s earliest days.”

Building on DePete’s words, Capt. Todd Insler (United), his pilot group’s Master Executive Council chair, emphasized, “Our thoughts remain with the families of the passengers, crewmembers, first responders, and all the innocent victims killed and wounded on that horrific day. Their loss and sacrifice is forever etched in our memory. Today we also reflect on how the American people, especially those of us in ALPA, came together to ensure our passengers and crews would safely fly again. At the time, it was the worst downturn in travel ever to hit the industry.

“Now we are faced with another grave challenge to the viability of our industry,” he continued, “but we should take inspiration from the lessons learned after 9/11. Just as we were required to focus all of our strength together then, the ongoing pandemic will take dedication and sacrifice to safeguard our future.”

“We are here to honor the memory of those who were taken from us on September 11, but we are also here to bear in mind the humanity that was not taken from us—that can never be taken,” reminded F/O Tim Perry, ALPA Canada president. “Let us think about all the things that bind us as pilots but also as fathers and mothers, daughters and sons, brothers and sisters, and friends that we hold even more dearly today. I ask you to think not only of the pain, suffering, and loss that we share in memory of those who fell that day, but also of the humanity that knows no uniform, no border, nor passage of time—for it is in that humanity that we find strength.”

In honor of the fallen, Capt. Bill Couette, ALPA’s vice president–administration/secretary, and Capt. Joseph Genovese, ALPA’s vice president–finance/treasurer, placed a commemorative wreath on the split-rock memorial. DePete then read the names of each of the pilots, flight attendants, and other airline employees who were aboard United Flights 93 and 175 and American Flights 11 and 77 on Sept. 11, 2001, as Capt. Bob Fox, ALPA’s first vice president, rang a bell following the reading of each name in remembrance of those who lost their lives during the terrorist attacks 19 years ago. 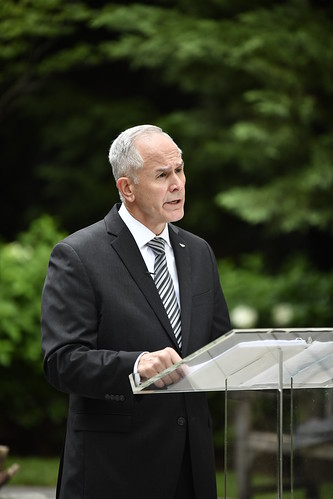