“While first-year salaries for pilots at regional airlines are moving in the right direction, new pilots are looking for a long-term career with growth and good quality of life,” said Capt. Tim Canoll, ALPA’s president. 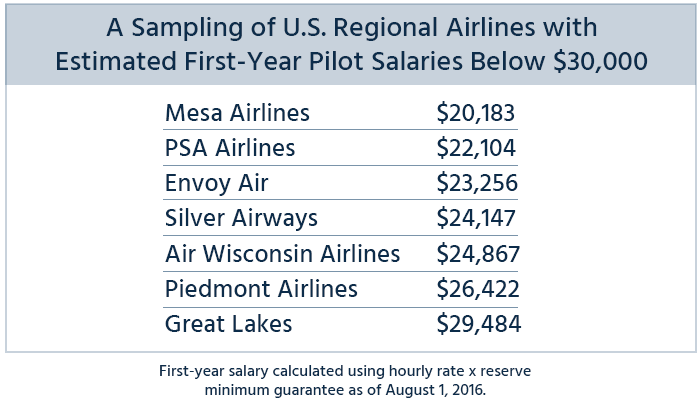 Some low-paying regional airlines are attempting to lure new pilots with one-off signing bonuses, but ALPA maintains that such single-time offers are gimmicks that won’t distract qualified individuals from the fact that contracts at many of these airlines don’t provide the pay, health-care benefits, quality of life, and job growth that their current and new pilots seek.

At the same time, other regional airlines have acknowledged the important role that contract improvements and career progression play in attracting qualified candidates and are incorporating career-advancement programs that will positively influence the long-term availability of qualified pilots in the U.S. airline industry.

“Over the past two years, a few regional airlines have begun taking the positive steps in improving pilot contracts and creating the career-advancement avenues that ALPA has sought for years,” said Canoll. “As a result, these regional airlines will have an increased ability to recruit and retain qualified pilots, but much more needs to be done.”

Federal Aviation Administration (FAA) statistics make it clear that thousands of individuals currently hold the airline transport pilot (ATP) certificate necessary to become an airline pilot in the United States, and many more obtain them every month. While there were approximately 76,000 airline pilot jobs in 2015, FAA data show that, as of January 2016, a total of 141,542 currently active pilots under age 65 hold an ATP and first-class medical certificate. Another 100,000 pilots hold instrument ratings and commercial certificates and could obtain ATPs or restricted airline transport pilot certificates.

Founded in 1931, ALPA is the largest airline pilot union in the world and represents over 54,000 pilots at 31 U.S. and Canadian airlines. Visit the ALPA website at www.alpa.org or follow us on Twitter @WeAreALPA.