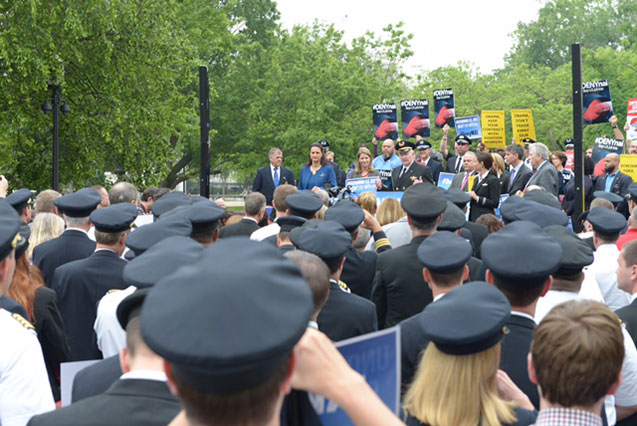 Capt Tim Canoll addresses the crowd: “The hundreds of ALPA pilots and other aviation workers gathered here today join Members of Congress, passengers, and cargo shippers in speaking out against Norwegian Air International’s application to serve the United States with a business model that disrupts fair competition and threatens U.S. jobs as a result.”

“It’s time for the White House to step up, enforce our agreements, and support U.S. jobs and deny NAI’s application,” said Capt. Tim Canoll, ALPA’s president, in remarks to the crowd of hundreds gathered in Lafayette Square in front of the White House. “Airline employees, passengers, and cargo shippers have raised their voices in united opposition because NAI’s business plan is designed to undermine labor standards and the intent of one of this country’s international trade agreements.”

Earlier this week, ALPA published ads in prominent Washington, D.C., news outlets, which were co-sponsored with the AFL-CIO and the Association of Flight Attendants–CWA. ALPA also released a whiteboard video underscoring how NAI’s business model creates a harmful precedent for U.S. air transport policy and labor standards. More than 16,000 airline pilots have spoken out to protest the NAI application and call on the U.S. government to defend U.S. jobs and fair competition.

On April 15, the U.S. Department of Transportation (DOT) tentatively approved NAI’s request for a foreign air carrier permit to allow it to operate flights to the United States. NAI’s business plan, which was devised to allow it to avoid Norwegian labor, tax, and regulatory laws, is inconsistent with the intent of the U.S.–EU Air Transport Agreement (ATA).

NAI has planned to use flight crews employed on Asian employment contracts while flagged in Ireland, creating a flag-of-convenience scheme completely at odds with the ATA. The ATA includes a labor provision—known as Article 17 bis—that requires the DOT to ensure that opportunities under the agreement are not used to undermine labor standards.

Since NAI applied for a U.S. foreign air carrier permit, more than 200 Members of Congress have sent letters to the DOT asking the administration to prioritize the ATA’s labor article in its evaluation of NAI’s application. Congressional language in both the FY2015 and FY2016 appropriations bills demanded that the DOT give Article 17 bis appropriate consideration as an essential element of the ATA.

“The hundreds of ALPA pilots and other aviation workers gathered here today join Members of Congress, passengers, and cargo shippers in speaking out against Norwegian Air International’s application to serve the United States with a business model that disrupts fair competition and threatens U.S. jobs as a result,” said Capt. Canoll. “If one airline is permitted to ignore U.S. air transport policy, others will surely make the same attempt. The Obama administration must stand by its own agreements and deny NAI’s application.”

ALPA is part of a labor alliance, representing more than 200,000 aviation workers calling on the Obama administration to enforce U.S. trade agreements and defend good jobs and fair competition. Find out more at ttd.org/denynai.

Founded in 1931, ALPA is the largest airline pilot union in the world and represents over 52,000 pilots at 30 U.S. and Canadian airlines. Visit the ALPA website at www.alpa.org or follow us on Twitter @WeAreALPA.