F/O Kent Katnik (United) recently had the opportunity of a lifetime participating in a relay team memorializing the very first coast-to-coast airmail run in the United States. On September 8–11—exactly 100 years from the original airmail operation—he and 39 other pilots, flying 15 legs of a 2,560-mile journey from Farmingdale, N.Y., to San Francisco, Calif., transported a commemorative mailbag for the Air Mail 100 Centennial Flights reenactment.

Regional airmail service in the United States began in 1918, but on Sept. 8, 1920, the Post Office launched the nation’s first transcontinental airmail route. Many of the pilots who survived the difficult conditions and not-always-dependable aircraft of that era went on to become the first generation of airline pilots. One such aviator, Jack Knight, later became a United captain and one of ALPA’s first members. 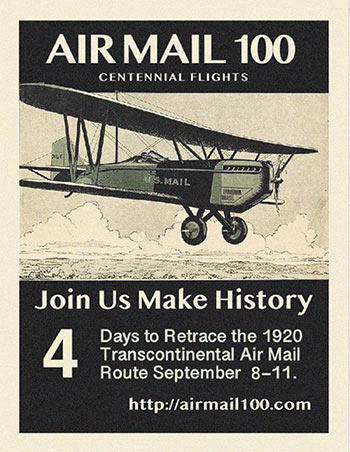 Katnik, a B-737 flight instructor at the United Airlines Flight Training Center in Denver, Colo., owns a Cessna 150G, which he parks at Boulder Municipal Airport in Boulder, Colo. He learned about the planned reenactment through a local Experimental Aircraft Association chapter and contacted the event organizer to see if he could participate.

Katnik was initially assigned to fly the Cheyenne-to-Rawlins, Wyo., leg on September 10. The original route planners likely picked the city pair to follow the Union Pacific Railroad line, which would serve as a visual landmark in fair weather. Rawlins appears on a 1924 transcontinental airmail map, but whether it was actually used for the original September 1920 mission is unknown. However, today’s Rawlins Municipal Airport was scrubbed as part of the anniversary operation due to runway construction and replaced with Shively Field in Saratoga, Wyo.

In preparation for his historic trip, Katnik, a former Mesa and Frontier pilot, flew to Cheyenne the week before the event to make a trial run to Saratoga to “check out the lay of the land.” Unfortunately, his aircraft experienced a vacuum pump failure on the flight home. While repairs decommissioned his airplane for several days, the necessary fixes were completed the day before he was scheduled to join the relay.

On September 10, Katnik arrived at Boulder Municipal Airport and departed for Cheyenne about 6:00 a.m. He recalled, “It was about 2,000 feet overcast and 39 degrees Fahrenheit with light rain. The freezing level was about 2,000 feet above me, and, as I left Boulder, I was able to stay VFR below the clouds and out of the precip most of the way toward Cheyenne.” He noted that unlike the early aviation pioneers, he had the benefit of flight service stations and graphical forecasts, so he knew what he’d have to contend with that morning.

In due course, Katnik landed at Cheyenne Regional Airport where he met J.T. Grainger and Christian Iberlin, who had flown the previous leg of the trip from North Platte, Neb.

While on the tarmac, local news media spoke with Katnik. Commenting to one reporter about the original pilots who flew his route, he noted, “When they started, they were doing a lot of visual flight rules. They were just looking at things on the ground. Every once in a while, they’d pop up into the clouds and fly on a specific heading [i.e., dead reckoning] for a number of minutes, and then let down and hopefully they’d find their airport underneath them.”

In the 1920s, the Cheyenne airfield was of particular concern to airmail pilots because it presented operational challenges for the de Havilland DH-4s and some of the other aircraft that flew this segment of the run. The airport sits at 6,600 feet, well within the aircraft’s operating capabilities. However, the airfield is bordered to the west by the Medicine Bow mountain range, including a nearby peak at 12,018 feet. Fortunately, pilots could fly around the north side of the mountain where the terrain was mostly under 10,000 feet.

The DH-4’s wooden struts and linen sheeting often struggled to get in to and out of Cheyenne because of its routinely gusty conditions. A local historian commented that crews would sometimes have to hold down airplanes on the runway while mail was being loaded because of the strength and tenacity of the winds in the region.

Back on the tarmac, Katnik posed with Grainger for a few photos before grabbing the mail and preparing to depart shortly after 7:30 a.m. “I left Cheyenne with relatively calm winds, heading southwest and climbing to about 8,500 feet,” he remembered. “I followed Interstate 80 as I navigated my way over to Laramie, Wyo.” 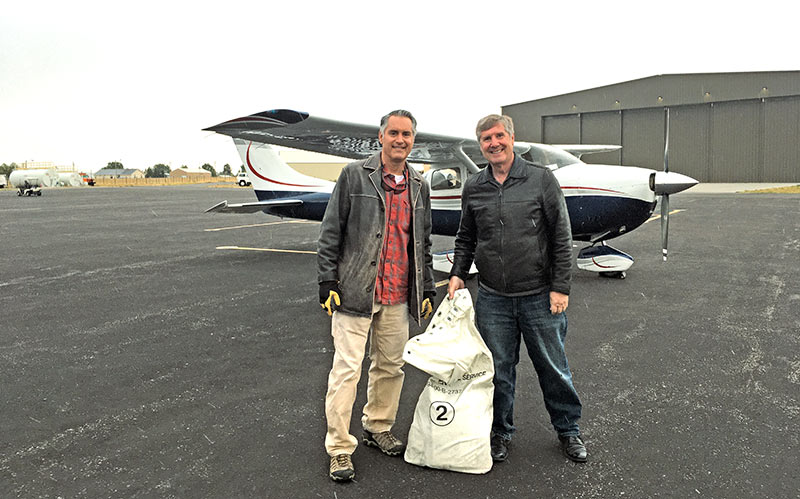 Katnik hands the commemorative mailbag to Craig Teerlink for the next leg of the journey to Southwest Wyoming Regional Airport in Rock Springs, Wyo.

Katnik remarked that his Cessna aircraft was a great choice for this kind of flying. “It has a modified engine, which is really nice for the Rocky Mountains. They took the stock 100-horsepower Continental off and added a 150-horsepower Lycoming.”

The airplane continued northwest from Laramie, where it climbed to 10,500 feet, again following Interstate 80. Katnik soon spotted the infamous 11,000-foot Elk Mountain, the site of a famous accident involving a United Douglas DC-3 that on Jan. 31, 1946, claimed the lives of the 21 passengers and crewmembers. Flying from Boise, Idaho, to Denver at night and with poor visibility, the aircraft hit the snowy southeastern slope of the mountain, just 340 feet from its summit.

Katnik maneuvered around the formidable peak, eventually turning to the south and descending toward his destination to complete the hour-long excursion. Five minutes after he arrived at Shively Field in Saratoga, Craig Teerlink and Greg Sotor touched down. They took possession of the airmail bag and were soon on their way to Rock Springs, Wyo.

The final leg of the journey was completed the following day when the last aircraft of the coast-to-coast adventure, navigating through thick smoke from northern California’s recent forest fires, touched down at 10:10 a.m., Pacific time, at Buchanan Field in Concord, Calif., just east of San Francisco Bay. The organization reported that “at 2:30 Pacific time on Sept. 11, 2020, the Air Mail 100 Centennial Flights handed over a mail sack to San Francisco’s postmaster on Marina Green on the exact date, time, and location it happened 100 years ago.”

Fans of this anniversary event were able to follow the course of each of the 15 planes in real time using FlightAware.

An excited U.S. Post Office released a statement 100 years ago, sharing an epiphany about the trip. “With the establishment of the transcontinental airmail, there will be at the service of the United States military forces what is probably the greatest system of regularly maintained landing fields and facilities in the world, a system that will enable the movement of air fleets from ocean to ocean with large landing fields and fueling and repair facilities approximately every 200 miles.”

Although the final flight of the 1920 inaugural operation arrived 16 hours late, it set a remarkable precedent. Once the new transcontinental airmail route was firmly established and operating on a regular basis, it reduced the typical amount of time it took trains to deliver the mail—that same distance—by two full days.

“I know that the pilots who were flying the different legs of the Air Mail 100 Centennial Flights with me this week were all thinking about those who came before us and the incredible risks they took,” said Katnik. “Some paid for this experience with their lives. These early pilots were true trailblazers and our industry exists thanks in large part to their courage, resilience, and hard work.”

Learn more about the Air Mail 100 Centennial Flights project commemorating the 100-year anniversary of the launch of the U.S. transcontinental Air Mail Service.