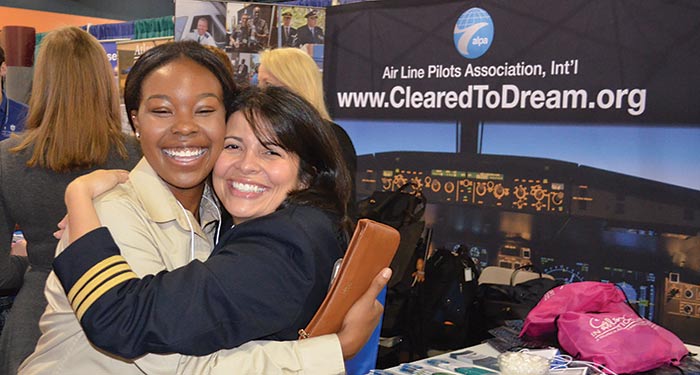 Tyniyah Harris, left, who has her private pilot certificate and is working on her instrument rating, and F/O Claudia Zapata-Cardone (United) get reacquainted at ALPA’s booth during the International Women in Aviation Conference.

Women in Aviation, International sponsored the conference, which also featured a “Girls in Aviation” outreach event aimed at connecting young women and aspiring pilots with role models eager to share their insights on aviation careers. Guided by female pilots, 200 girls from ages eight to 17 took part in targeted workshops, presentations, and hands-on learning opportunities with flight simulators, unmanned aircraft, and other technology. It’s all part of a program to encourage girls to explore a career in aviation. In a conference hall filled with gadgets, crafts, and children, one of the strongest visuals at the Girls in Aviation event was the number of women in military and airline uniforms and the enthusiastic girls literally looking up to them.

Path to the cockpit

One clear inspiration to students stopping by ALPA’s booth at the conference was F/O Claudia Zapata-Cardone, whose parents immigrated to the United States in the 1960s. She discovered her love for flying as a child in the early 1980s when her father, Jesus Zapata, a cargo load agent at People Express Certified Freight Services, which was later purchased by Continental Airlines, introduced her to aviation.

“My father used to take me to the Newark airport to watch airplanes land,” remembers Zapata-Cardone. “He would regale me with information about each type of airplane. And if it was an airplane he was intimately familiar with, he would also tell me its cargo load capacity and range. When my father worked the evening shift, my mother would drive to the airport to take him dinner, so I was at the airport almost nightly when he worked. I loved the hustle and bustle and the excitement. As a typical kid, I thought Elizabeth, New Jersey, was the most boring place on Earth and anywhere in the world had to be more exciting.”

The Zapata family moved to Orlando, Fla., in 1991. In 1995, Zapata-Cardone heard about the then start-up airline AirTran Airways. She applied and was hired as a reservation agent at the airline and quickly moved up to become a crew scheduler. Then in 1997, she became a flight attendant for Delta Air Lines. Zapata-Cardone had become friends with pilots—mentors who happened to own a Cessna 172. “My father warned me that the airline industry was very cyclical,” she recalls. “He had been through a merger and subsequent bankruptcy, but he felt very strongly that working in the aviation industry was still the best job you could have.”

Zapata-Cardone was determined to become a pilot, but her excitement was tempered with trepidation. And as she met more pilots who’d gone the civilian route to achieving their licenses and jobs, she knew that the required training would come with a hefty price tag.

“My parents were a bit skeptical at first since they had seen maybe one female pilot ever and also had the misconception that you could only make a career out of it if you were in the military,” says Zapata-Cardone. “But they strongly believed in the American dream and had achieved success by not giving up. Once they realized I was serious, they were 100 percent on board. They helped me financially when student loans were not enough to cover certain expenses. They were my cheerleaders with each rating and were a huge support through setbacks.” In 2010, Zapata-Cardone earned her airline transport pilot certificate, just a few months before getting hired by Atlantic Southeast Airlines.

Today, the average cost for a university degree and training to become an airline pilot is between $150,000 and $200,000. Yet the number of women choosing aviation careers is on the rise. According to the FAA, the number of women holding airline transport pilot certificates has increased by 23 percent since 2006. While many pilots face challenges balancing required education and training with finances and family, Zapata-Cardone is one of a growing number of pilots finding success through support from relatives and by taking untraditional career paths.

Scholarships are another factor helping women reach their aviation career goals. And the path to success for F/O Tine Martinelli was recently paved with such a $25,000 boost. She began her career as a dispatcher and scheduler for a flight school in Arizona, then flew for ExpressJet until she joined PSA two years ago. At this year’s Women in Aviation Conference, Martinelli was awarded the FedEx Express Boeing 757/767 Type Rating Scholarship, which covers type rating, systems, and simulator training.

“This training is definitely something I wouldn’t be able to afford on my own,” says Martinelli. “The rating scholarship will allow me to grow as a pilot and broaden my knowledge, and I hope that gaining this experience will help take my aviation career to the next level. The scholarship and the accompanying recognition of the work I’ve put in over the years are definitely a confidence boost that will help keep me going.

“I hope my passion will continue to take me to new heights and maybe help open some doors along the way for those girls and women who are just starting their aviation journey,” Martinelli says.

Martinelli is one of seven ALPA members who were awarded scholarships at this year’s Women in Aviation Conference. In all, 120 scholarships totaling nearly $650,000 were given out at the event. “Women in Aviation offers a wealth of scholarship opportunities to help female pilots,” notes Martinelli, who went through a lengthy application process before receiving her award. The scholarships are designed to help females move forward in their aviation careers—whether they’re pilots, mechanics, flight attendants, managers, etc.—both with financial help and through different types of specific training.

Like Martinelli, Zapata-Cardone also won a scholarship—the International Society of Women Airline Pilots Boeing 737 Type Rating in 2015—but declined it just a few months later when United Airlines hired her as a first officer.

During a Women in Aviation Conference panel discussion entitled “Landing Your Dream Job,” Zapata-Cardone shared her journey to becoming an airline pilot with those in attendance. Capt. Paul Ryder, F/O Sara Wilson, and Angie Marshall, an airline recruiting expert, also gave their insights on how to land an airline job. Balancing Marshall’s recruiting perspective on the mainline hiring process, the three pilots shared advice on how they navigated the path to a mainline carrier before taking questions from students, regional pilots, and military personnel. Also in the audience were Jesus and Gladys Zapata, still cheering on their daughter.

“They never lost faith in me, even when I lost faith in myself,” acknowledges Zapata-Cardone. “Without the support of my family, encouraging me, believing in my dreams, providing financial support, I would never have been able to reach my goals.”

The next International Women in Aviation Conference will be held March 22–24, 2018, in Reno, Nev., with online registration opening in September. Women in Aviation scholarships are open to the organization’s members. Applications will be available online at www.wai.org this fall.

This article was originally published in the May 2017 issue of Air Line Pilot.