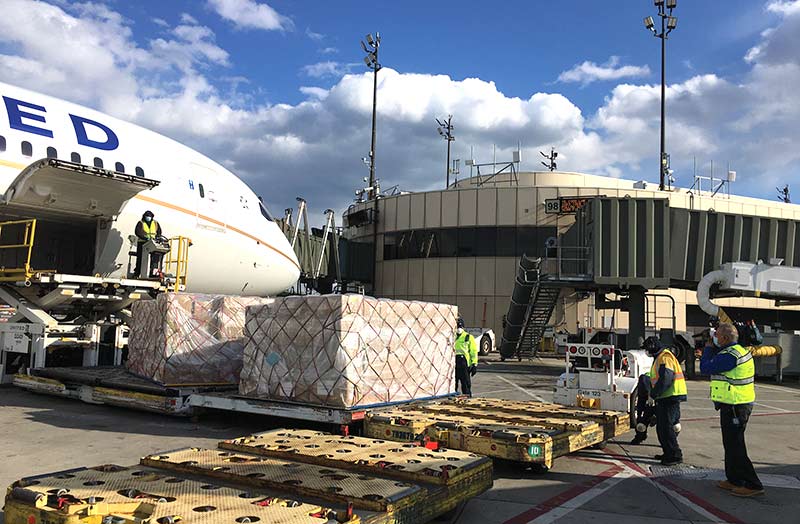 United Airlines pilots are flying 100 cargo charters each week in addition to the more than 130 trips that have already returned nearly 18,500 individuals back to the United States.

Despite drastic cuts in airline operations amid the COVID-19 pandemic, air transportation continues as airline pilots in the United States and Canada fly numerous special missions to evacuate nonresidents and tourists, reposition medical professionals to crisis areas, and expedite valuable medical materials to where they’re needed.

“I’ve watched with pride as ALPA members have exercised steady professionalism as you fly the line,” said Capt. Joe DePete, ALPA’s president, in a March 12 all-member message. “At every opportunity, I’ve made clear that we, as airline pilots, are doing our part to help keep the U.S. and Canadian airline industries strong and contributing to the global economy.”

And while it’s clear that the repercussions of the pandemic will ripple through the industry for the foreseeable future, what’s even clearer is the essential work ALPA pilots have performed at the risk of their personal safety and for the betterment of many.

Evacuation during the pandemic

Among these efforts, United Airlines pilots recently flew more than 130 trips, returning nearly 18,500 individuals back to the U.S. The airline has scheduled an additional 10 flights weekly from cities in El Salvador, Honduras, and Peru.

United also flew passengers abroad, transporting 219 Australian citizens who were aboard a pair of cruise ships, one docked in California and another in Florida, back across the Pacific to Australia. The special flight consisted of entirely cruise ship passengers to prevent others from potentially being exposed to the virus. All were screened by a doctor to ensure that they were fit for travel.

Pilots from Spirit Airlines repatriated more than 1,300 Americans from Aruba, Colombia, the Dominican Republic, Haiti, Honduras, and Panama on a dozen flights in mid-April—doing their part to heed the government’s call to “bring ’em home.”

However, the State Department recently acknowledged there are many more Americans who still need a lift, and a variety of factors are complicating the rescue effort. From the U.S. Embassy in Lima, Peru, a tweet responded to those stranded there, “We understand that in some places hotels or local authorities are not letting U.S. citizens leave for their flights due to the quarantine. We are aware of this issue and working to resolve it.” U.S. Secretary of State Mike Pompeo added, “Our team won’t stop until we get all #AmericansHome who wish to return.”

Effective March 18, airports in Toronto, Ont.; Montreal, Qué.; Calgary, Alb.; and Vancouver, B.C., became the primary entry points for international passengers as a means to limit COVID-19’s spread into Canada. WestJet was among the first Canadian airlines to suspend commercial operations and fly rescue and repatriation flights to bring thousands of Canadians home from across the globe. Between March 17 and March 25, WestJet pilots carried approximately 10,000 Canadians from international locations and operated flights throughout the Caribbean.

At the end of March, JetBlue and Delta offered free round-trip flights for qualified medical personnel to fight COVID-19. Delta offered flights to Georgia, Louisiana, and Michigan, while JetBlue, in partnership with the American Red Cross, Americares, and Doctors Without Borders, transported health-care workers and desperately needed supplies to locations they were needed the most.

On April 3, United announced a program to provide free round-trip flights for medical volunteers willing to help in the frontline fight against the virus. “Our health-care workers are heroes, and they need reinforcements,” said New York City Mayor Bill de Blasio in a United press release.

Alaska Airlines pilots will be providing the lift of one million miles worth of flying donated to Angel Flight West, a public-benefit organization that transports patients via general aviation and corporate aircraft, to fly medical professionals free of charge to locations across the U.S. to help relieve overwhelmed health systems responding to pandemic. 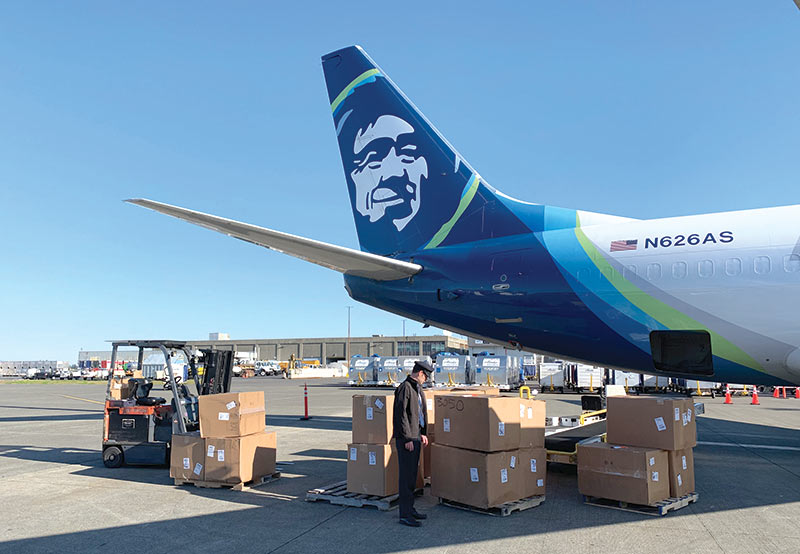 F/O Chris Gruner inspects supplies to be loaded onto one of three dedicated cargo aircraft flown by Alaska Airlines.

Rushing supplies to the front lines

But as demand for personal protective equipment (PPE) and other medical supplies increased throughout the United States and Canada, FedEx changed course and began flying critical shipments for the U.S. government from around the world through an effort called Project Airbridge.

Coordinated by the U.S. Department of Health and Human Services and the Federal Emergency Management Agency (FEMA), Project Airbridge expedites the shipment of PPE and other supplies by fast-tracking loads via air cargo instead of traditional ocean shipping.

FedEx has delivered PPE shipments from manufacturers in and around Hanoi, Vietnam; Kuala Lumpur, Malaysia; and Shanghai, China, to the U.S. Upon arrival stateside, these shipments have been added to the U.S. Strategic National Stockpile, where FEMA then manages distribution to health-care facilities and workers throughout the country. Two of the first shipments were coordinated with DuPont and included more than 450,000 Tyvek protective suits.

Alaska pilots transported materials from Seattle, Wash., to be used to create 210,000 hospital-grade masks for caregivers at more than 50 hospitals across the western U.S.

Some airlines that typically transport passengers have shifted to fly all-cargo missions during the pandemic. In early April, United began regularly operating B-787s to bring medical supplies and PPE from China to San Francisco, Calif., and Newark, N.J. A single load from one of these flights contained donations of 1,000 ventilators, 70,000 goggles, and 300,000 masks to supply 14 hospitals, medical centers, and nursing homes in the hard-hit New York City area.

When, in mid-April, the governor of Hawaii and mayor of Honolulu announced the mandatory wearing of face masks by the state’s entire population, a Hawaiian Airlines A330 flew to Shenzhen, China, picked up more than 1.5 million face masks, and transported them to the island chain. To increase the airplane’s cargo capacity, the lower crew module was removed so that an additional 2,500 pounds of cargo could be safely loaded. The masks are being distributed to those in need for free in partnership with the grassroots community group Every1ne Hawaii.

During times of national and global crises, ALPA members have unselfishly answered the call to duty. And the COVID-19 pandemic has been no exception. ALPA pilots continue to be on the front lines flying medical professionals to crisis areas, transporting valuable medical supplies to where they’re needed, and repatriating stranded citizens—all at great personal risk to themselves, their families, and their communities.

They are truly unsung heroes of the airline industry.


ALPA Calls on Government to Protect the Health of Airline Pilots

To provide a safe and healthy workplace for its members, the Association continues to press government leaders to take action. In a letter to President Donald Trump, House Speaker Nancy Pelosi (D-CA), and Senate Majority Leader Mitch McConnell (R-KY), ALPA urged U.S. government leaders to protect the pilot workforce in the next phase of the federal relief and worker protection legislation by

ALPA Canada has also been calling on the Canadian government to provide protections for pilots, raising health and safety concerns with Transport Canada numerous times in recent months. ALPA maintains that guidelines for the health and safety of crewmembers must be specific to their jobs and that all airlines must be compelled to follow the guidance.

Despite ALPA Canada’s input and communications, including letters to the prime minister and the ministers of Labour and Transport, the government has stopped short of issuing protections for essential, frontline aviation workers.

ALPA will continue to press Transport Canada to ensure that pilots have the protections they deserve by mandating appropriate measures and standards via an interim order.

This article was originally published in the May 2020 issue of Air Line Pilot.