“If you know anything about terrorists, they look for weaknesses. This is something that nobody is taking the responsibility for—to do what’s right for the safety and security of Americans.... There is a simple solution to at least take that threat out of the way.”

These words by Ellen Saracini ring just as true today as they did in September 2013, when both the U.S. House of Representatives and the Senate introduced the Saracini Aviation Safety Act of 2013. Named after Saracini’s late husband, Capt. Victor Saracini, who piloted United Flight 175 when it was hijacked by terrorists and flown into the World Trade Center on Sept. 11, 2001, the bill called for the installation of secondary flight deck barriers on all airliners.

Since the terrorist attacks 18 years ago, ALPA has been working alongside Saracini, advocating for the mandatory installation of these barriers. The lightweight security devices have been proven effective in creating a physical barricade to help prevent hostile individuals from reaching the flight deck while the cockpit door is opened and closed during flight.

After several legislative attempts and continuous lobbying by ALPA members, the Association and its supporters scored a major victory last year when Congress passed the Federal Aviation Administration Reauthorization Act of 2018, a bipartisan effort that among other measures mandated secondary flight deck barriers on newly manufactured passenger airliners. In the reauthorization, Congress called for the FAA to issue a rule mandating these barriers by Oct. 5, 2019. That date has now come and gone, with no action from the FAA and no new secondary barriers installed.

Rather than issuing the order as Congress intended, the FAA deferred to a blatant stall tactic promoted by special interests and tasked the Aviation Rulemaking Advisory Committee (ARAC) to form a working group to do more study, despite years of research and technical guidance performed by RTCA, its then federal advisory committee. In 2008, in response to ALPA’s urging, the FAA tasked RTCA with creating technical and performance standards for use by aviation regulators and industry to develop standards and operational guidance for secondary flight deck barriers. To add insult to injury, the FAA asked ALPA to lead the new ARAC working group charged with developing the second round of standards.

Last month, Capt. Bob Fox, ALPA’s first vice president and national safety coordinator, testified before Congress at a hearing titled “Implementing the Federal Aviation Administration Reauthorization of 2018” and blasted the FAA for its failure to move forward on the implementation. “Forming this advisory committee right now is a waste of resources. This work was done by a federal advisory committee back in 2008, and they produced a document that is the performance standard to develop and install secondary barriers on airline aircraft. The FAA could issue a final rule tomorrow.” 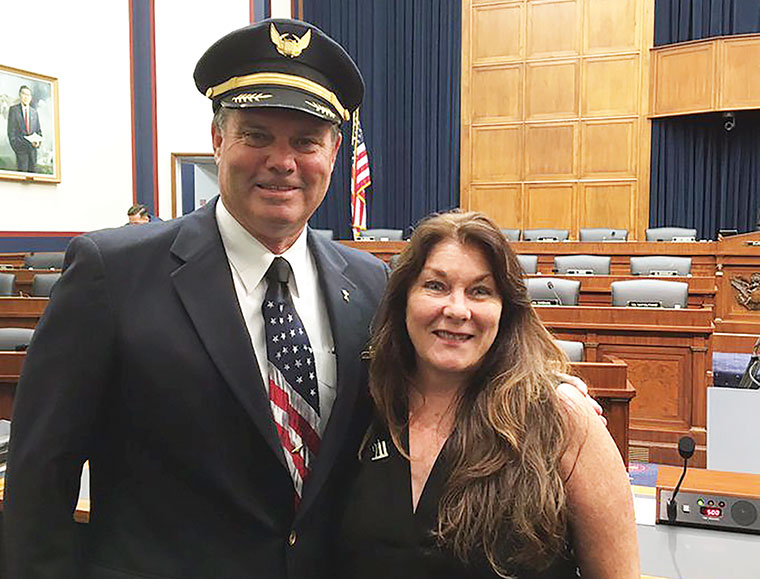 ALPA is not alone in calling on the FAA to adhere to the law. In July, more than 100 Members of Congress sent a letter to Secretary of Transportation Elaine Chao clarifying their intent to apply secondary barriers to all new manufactured aircraft. “Any attempt by the FAA to reinterpret the provision more narrowly or to further study these well-understood security barriers would substantially delay implementation and evade incontrovertible congressional intent.”

Capt. Joe DePete. ALPA’s president, applauded the congressional letter, adding, “Action on secondary barriers is needed now, not many months or even years from now, and protection protocols need to be strengthened.” ALPA pilots continue to work with their lawmakers on this issue and continue to push the FAA to follow the direction of Congress and issue the long-overdue rulemaking that will help advance flight deck security on airline flights.

On October 15, DePete took an important message directly to FAA Administrator Steve Dickson during a face-to-face meeting with the new head of the agency.

“ALPA is deeply disappointed in the FAA’s blatant stalling on this important issue,” DePete asserted. “Airline pilots have been advocating for this safe, cost-effective, and efficient way to protect the flight deck, and we were pleased last year when Congress passed a law mandating the installation of these barriers. By dragging its feet and wasting resources, the FAA has thumbed its nose at Congress, threatened the flying public, disrespected pilots, and has done the bidding of special interests. It’s time to implement the law today.”

This article was originally published in the November 2019 issue of Air Line Pilot.