Analysis and Forecast of the Air Cargo Industry


The air cargo industry faces many of the same challenges that the passenger airline industry has seen in 2016: slow economic growth, reduced yields, and overcapacity. In addition to these challenges, the air freight industry is also experiencing reduced demand as global trade slows, more exposure to currency fluctuations, and the effects of lower fuel surcharges as oil prices have fallen.

ALPA’s Economic & Financial Analysis Department takes an in-depth look at this sector of the industry, with a focus on potential economic challenges, mergers and acquisitions, the growing capacity from widebody belly transport, and e-commerce—all factors that will continue to shape the air cargo industry’s financial and operational results in the year ahead.

The air cargo industry is heavily tied to the demands of world trade and industrial production levels. Because of the decline in these two segments of the economy, the air freight industry has also been affected. The 2008–2009 global financial crisis significantly changed the landscape of global trade. Prior to the crisis, trade volumes grew between five and seven percent annually, and air freight traffic was strong. However, after the crisis, trade volumes have only reached growth levels of three percent. Much of this is due to rebalancing in China (a structural transformation that involves increased private consumption and a lower trade surplus) and its effect on other emerging Asian markets. In addition, the Eurozone crisis has curtailed global trade growth. 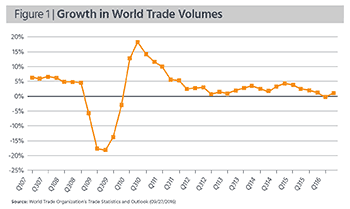 According to the World Trade Organization, world trade volume will grow more slowly than expected in 2016, expanding by just 1.7 percent, well below the earlier April forecast of 2.8 percent. This year would mark the slowest pace of trade and output growth since the financial crisis of 2009, and some consider this the new norm. The forecast for 2017 is also lower than previously anticipated, with world trade now expected to grow only between 1.8 percent and 3.1 percent— down from a previous forecast of 3.6 percent (see Figure 1). 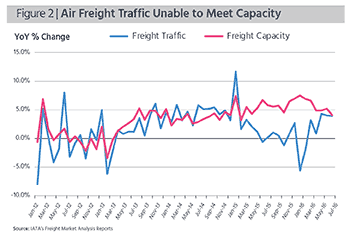 Regional differences also exist in freight traffic trends. Only Europe and the Middle East have experienced growth this year. Europe posted a 4.7 percent increase year to date and had the strongest August traffic performance, up 6.6 percent. Much of this increase comes from improved manufacturing levels. Just recently, the German Purchasing Managers Index reached its highest level in 18 months. While the Middle East had the strongest rate of growth year to date through August, 5.8 percent, it saw only a 1.8 percent growth rate in August. This trend is due to slowing economic growth between the Middle East and Asia. And based on growth in Europe, analyses indicate that more direct flying between Europe and Asia is at play.

For the year, Asia-Pacific freight traffic has declined 0.8 percent, but this area did see stronger growth rates in July and August— 5.0 percent and 2.8 percent, respectively. The Asia-Pacific region is expected to be the world’s largest retail commerce market in the years ahead, but the region will also see greater competition among e-commerce players. This will result in the increased demand for improved infrastructure and logistics in the region in order to fuel that growth. In particular, Southeast Asia has an underdeveloped digital payment system infrastructure and a weak logistics framework. 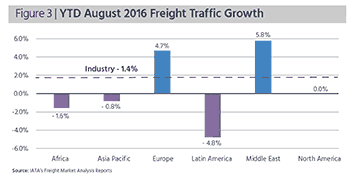 North American freight airlines had a 5.5 percent increase in freight traffic in August, while year to date the level is flat. The strength of the U.S. dollar has put U.S. exports under pressure. Latin American freight continues to drop, falling 3.3 percent in August and 4.8 percent for the year. African freight traffic rebounded in August, posting a 3.7 percent gain, but remains below last year by 1.6 percent. This increase is primarily attributed to the recent expansion of Ethiopian Airways. However, the load factors for African carriers were just 22.2 percent in August, nearly half that of the industry average (see Figure 3).

FedEx Express and UPS are the largest movers of domestic freight, while Emirates is now the largest carrier of international freight in the world, followed closely by Cathay Pacific and Lufthansa. Overall, however, FedEx remains the largest mover of air freight. FedEx should see a significant increase in the amount of international freight measured now that the company’s purchase of TNT is complete. TNT was a dominant player in the EU freight market. Adding TNT’s freight traffic to FedEx’s would give FedEx a nearly 40 percent gain over its closest competitor.

Although the air cargo sector is facing some challenges, it’s showing small signs of improvement. Increases in Eurozone manufacturing and export orders are likely to support air freight demand in the coming months for carriers in this region. The recent bankruptcy filing of the large ocean-shipping firm Hanjin, based in South Korea, may also spur demand as the peak holiday season arrives— though analysts believe that the Hanjin bankruptcy will have less impact on air cargo than the West Coast port shutdown in 2015. Despite these small signs of improvement, analysts remain cautious about the industry’s overall outlook as global economic growth is slow and capacity in the air freight industry continues to outpace demand.

For the year, freight capacity was up 5.6 percent industrywide by the end of August, significantly ahead of the freight traffic growth of 1.4 percent. Capacity in the air freight market has been affected by both an increase in the number of airframes and upgauging. Currently, freighters make up approximately 8 percent of the in-service aircraft fleet. FedEx, UPS, and DHL combined operate more than 40 percent of the worldwide freighters in service today, according to the CAPA fleet database. 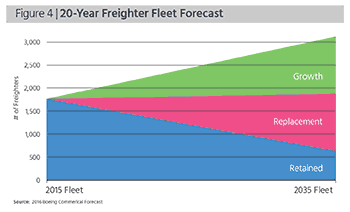 Since 2008, new widebody freighter deliveries have outpaced retirements by 17 percent in terms of payload capacity. New widebody freighters include A330-200Fs and B-747-800s, -767-300Fs, and -777Fs, most of which are larger and more fuel efficient than the B-747-200s and old DC-10s and MD-11s being retired. In addition, with lower fuel prices, the pace of aircraft retirements has slowed. According to both Boeing and Airbus, the all-freighter fleets in service should grow between 35 and 40 percent in the next 20 years (see Figure 4).

Capacity growth is further fueled by the increase in widebody passenger jets and the belly space these aircraft provide for hauling freight. The number of new widebody passenger aircraft deliveries totaled 355 units in 2015, up from 158 new deliveries in 2010. Of the more than 5,000 widebody jets in service today, 80 percent are passenger aircraft, although FedEx has more widebody jets in service than American, Delta, or United.

According to Cargo Facts, air freight transported in the belly of passenger airlines accounted for 13.6 percent of total cargo in 2015, up from 11.7 percent in 2009. These widebody passenger aircraft are operating increased frequencies (i.e., carrying more capacity) on some of the most lucrative trade routes. While carrying cargo on passenger airlines is helping the financial performance of those airlines, it’s leading to falling pricing power for cargo carriers and lower cargo yields. 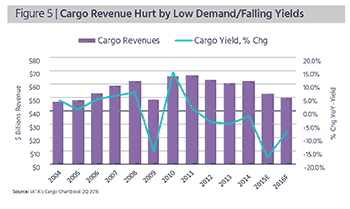 Yields have fallen between 5 and 6 percent since January and are expected to decrease 8 percent from 2015. Yet, this is an improvement from 2015, when yields declined nearly 18 percent. With capacity continuing to grow and demand falling, analysts expect that it could take time for freight yields to rebound. Still, some carriers in certain regions continue to see demand increase, which is contributing to those areas posting stronger results (see Figure 5).

The Rise of e-Commerce

Traditional freight traffic continues to make up the bulk of freight transported by air; and while this remains subdued, there’s growth in other segments of the air freight industry. One of these areas is e-commerce, which includes the sales of goods and services through the Internet via any device regardless of the method of payment or fulfillment (e-commerce excludes travel and event ticket sales over the Internet). Strong consumer demand and buying habits are mitigating some of the negative effects of the recent industrial recession and slowing international trade, with e-commerce becoming a growing driver of the air cargo industry. 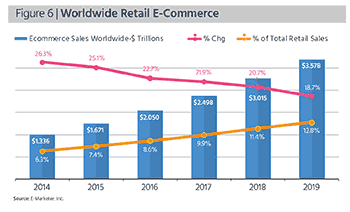 Distributing all of these vastly different products overnight or within two-day time frames is forcing many air cargo companies to adapt to a new business model. Success in this sector hinges not only on the ability to adjust to changing customer requirements but also to compete effectively with customers that rely on the significant belly space of widebody passenger fleets.

Not surprisingly, shipping costs for these e-tailers can run into the billions of dollars. Last year, Amazon’s shipping costs as a percent of its revenue were nearly 11 percent, or almost $11 billion. As a result, Amazon is focused on finding ways to reduce these expenses.

Although Amazon had relied solely on both FedEx and UPS for its shipping needs, due to tremendous growth last year, the e-commerce giant recently signed a five-year deal with ATSG, the parent company of Air Transport International and ABX Air, to operate 20 B-767s to transport its shipments. In addition, Atlas also signed a similar 7–10 year agreement with Amazon to operate 20 B-767s.

While ATSG and Atlas now have an “in” with the biggest e-commerce provider in the world, it’s not likely that they can fully replace FedEx and UPS, which have vast fleets of airplanes and vehicles, as well as very efficient distribution centers that are far superior to those of other operators.

Amazon’s market dominance is also giving it considerable bargaining power with its freight distribution partners. Now with additional partners to deliver customers’ orders, Amazon may have even more power in setting package freight rates, which may result in lower yields for FedEx and UPS. 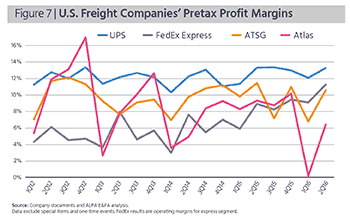 As air freight companies face declining traditional freight volumes and increasing e-commerce and express logistics, analysts would expect to see some inconsistencies in their financial performance. However, the data suggest otherwise. Freight companies are still profitable despite lower traffic and higher capacity (see Figure 7). Much of the profit can be attributed to increased e-commerce business and to lower fuel costs. Unfortunately, lower fuel costs also contribute to lower revenues from lower surcharges, especially at FedEx and UPS.

The air cargo segment is a wide-ranging industry with various types of operators, each filling a particular niche of freight demand. As the market changes with less international trade and more regional delivery, these niches may evolve as well. With more than 87 percent of the express logistics aircraft in service, FedEx, UPS, and DHL are the three primary companies in the e-commerce freight market. Other carriers that operate freighters are being forced into niche operations. This may mean more streamlined aircraft fleets and narrower flying routes because of specialization. In addition, the growth of e-commerce as well as distributed manufacturing could create demand for new express/regional small-package delivery networks.

Air cargo and supplemental carriers are in different positions in the business profit cycle than passenger airlines, and they, too, vary individually as to where they are on the cycle. Still, moderate weakness in trade volumes indicates slower air freight traffic in the year ahead.

This article was originally published in the November 2016 issue of Air Line Pilot.