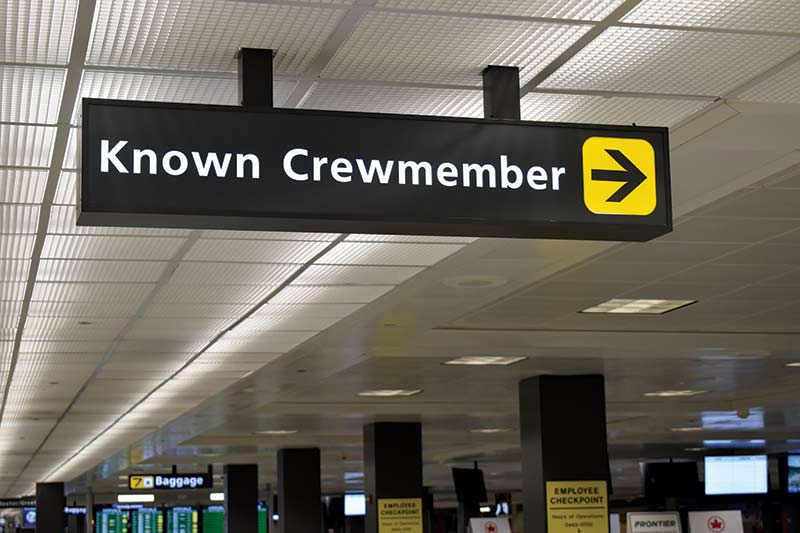 Editor’s note: This year marks the 90th anniversary of ALPA’s founding. As “the conscience of the airline industry,” the Association has been at the forefront of advocating for safety and security advancements to protect pilots and their passengers and cargo. In each issue of Air Line Pilot, a technology or topic that the union has championed will be highlighted.

From its inception in the early 1970s, security screening at airports was designed to find potentially dangerous objects carried by individuals that might threaten the safety of an airliner, passengers, and flight crews. Given that hijacking was the typical threat posed in the 1960s and 1970s, this type of screening was a logical and effective approach (see “Securing the Flight Deck” in the June 2021 issue). At that time, FAA regulations stipulated that airport passenger and luggage screening be the responsibility of individual airlines.

However, on Dec. 7, 1987, a Pacific Southwest Airlines customer service agent who had been fired used an expired company ID card to bypass a security checkpoint at Los Angeles International and boarded PSA Flight 1771 with a handgun. In flight, he shot and killed the flight crew before crashing the airliner into the ground near San Luis Obispo, Calif., resulting in the deaths of 43 people.

In response to the tragedy, new laws required “immediate seizure of all airline and airport employee credentials” after an employee’s termination, resignation, or retirement and prohibited airline employees from bypassing security screening checkpoints. The new laws required all airline flightcrew members and airport employees to be subject to the same security measures as airline passengers.

The FAA also mandated that major U.S. airports install computerized systems that relied on local databases to confirm an individual’s employment and authorization to enter a secure area before granting access.

However, the databases weren’t required to be interoperable, making it difficult for transient flight crews to go through security. An overhaul of the security regulations in 1993 resulted in the Universal Access System (UAS) prototype that was tested from 1994 until 1997 at a few U.S. airports with the help of two major airlines. ALPA helped develop and advocate for UAS.

Some airlines expressed an interest in deploying UAS, which was based on magnetic-stripe technology. But the limited maturation of “smart” card and biometric technologies in the late 1990s was among several factors that prohibited the system from being deployed nationwide.

The tragic events of Sept. 11, 2001, refocused the U.S. government’s attention regarding the need for better identity management in the aviation workforce. In response, the Department of Homeland Security (DHS) and the Transportation Security Administration (TSA) were created. The TSA was given the mission of conducting all security screenings at U.S. airports, although provisions were later made for private contractors at “Category X” airports, those that were the most vulnerable and likely targets for terrorism.

In 2002, the Canadian government created the Canadian Air Transport Security Authority (CATSA) under the purview of Transport Canada to screen passengers and their baggage. Four years later, in 2006, CATSA launched the Canadian Restricted Area Identity Card (RAIC) in close cooperation with ALPA. The first in the world, RAIC was a major step forward in implementing a system with robust background checks whereby all aviation workers would be positively identified using biometric technology.

Inspired by Canada’s example, in the summer of 2007, U.S. President George W. Bush signed into law the Implementing Recommendations of the 9/11 Commission Act of 2007 that, among other mandates, required the TSA to study and then implement a means of enhancing security and expediting pilots through security screening checkpoints.

While the TSA considered expanding the use of its biometric-based smart card, the Transportation Worker Identification Card (TWIC), to include aviation, the process was slow moving.

Meanwhile, ALPA recognized that the security need—positively identifying flight crews and verifying their employment status—remained unmet, and the security of the traveling public was being put at unnecessary risk.

The result was the development and implementation of ALPA’s Crew Personnel Advanced Screening System (CrewPASS), a biometric-based system that built upon the Cockpit Access Security System, a computer-based system that provides identity confirmation and employment status verification for jumpseaters.

CrewPASS provided a higher level of security above that of just physical screening of flightcrew members while lowering costs and reducing the length of security screening lines for the flying public. In May 2007, the TSA approved the first version of CrewPASS and deployed it at three East Coast airports for approximately three years.

Recognizing the need for the industry to build strategic partnerships to establish a permanent solution, the resulting system, Known Crewmember®, was jointly developed and operated by ALPA and the Air Transport Association (later renamed Airlines for America [A4A]) with TSA oversight. KCM would use the latest technology to link all participating airlines and require a third form of ID and photograph that would be cross-referenced with airline employee databases.

In late March 2011, ALPA and A4A met with TSA Administrator John S. Pistole and received TSA approval to install and test KCM at as many as seven U.S. hub airports. With subsequent approval from the White House and the DHS, on Aug. 9, 2011, Chicago O’Hare International Airport became the first of the seven KCM test sites to open nationwide.

“KCM was developed to enhance security and save time and resources,” says Capt. Wolfgang Koch (Delta), ALPA’s Air Safety Organization (ASO) Aviation Security chair. “Flightcrew members are subjected to high scrutiny before they ever begin flying at an airline, and that continues throughout their careers. KCM is designed to factor that into a commonsense, risk-based security program that allows everyone to devote their energies to screening those about whom less is known or may pose a threat.”

In 2016, five years after KCM was first deployed, the program was in use by 53 airlines at 65 airports. The following year, the TSA begun to allow Federal Flight Deck Officers to access KCM checkpoints.

In early 2018, the National Aeronautic Association announced that nine aviation and space achievements—including the combined efforts of ALPA, the TSA, and A4A that produced the KCM and TSA PreCheck® programs—would compete for the Collier Trophy. That same year, the TSA announced that the KCM program had screened more than 100 million crewmembers since its inception.

But less than a year later, it would face serious challenges. On Aug. 24, 2019, the TSA announced new KCM procedures that would require flight crews to be in uniform to use its expedited security screening. At the same time, the TSA would implement another “enhancement”: unpredictable screening procedures (USP).

In swift response, ALPA’s national leadership, ASO Aviation Security representatives, and professional staff worked around the clock to develop an alternate plan that would strengthen the program and address the TSA’s concerns involving KCM without unduly burdening flight crews. Within a week, the uniform requirement was dropped and a new educational and signage campaign was enacted. ALPA continues to advocate for a review of the randomization selection rate and process with the goal of maintaining the highest possible level of security and reflecting the comprehensive vetting airline pilots receive, as well as ALPA’s role as a critical element in a risk-based approach to aviation security. It’s expected that once biometrics are introduced into the KCM program, USP will be scaled back.

While available to pilots from 76 airlines at 227 checkpoints in 112 airports, KCM is far from a complete program. Since 2015, ALPA has been working with the TSA and Transport Canada to include ALPA pilots from Canada in the program, and the Association continues to advocate for their inclusion. In addition, ALPA’s Aviation Security Group has been sharing its knowledge and experience with the Australian Airline Pilots’ Association to create a similar program in that country.

“ALPA fully recognizes the importance of KCM to pilots in terms of aviation security and the effect on quality of life,” says Capt. Joe DePete, ALPA’s president. “We know that KCM is a valuable time- and cost-saving program—for the TSA, airlines, and flightcrew members—and our efforts to strengthen and protect this program continue unabated.”