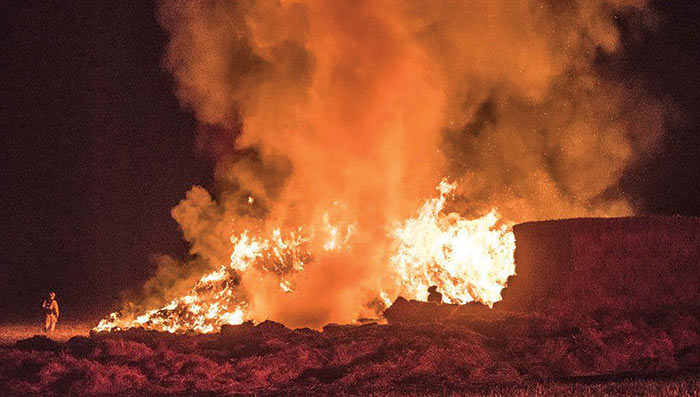 Many witnessed the evidence of this year’s catastrophic California wildfires, looming in the hazy late-summer skies across much of the United States. However, F/O Charles “Chad” Fairbrother (Alaska) saw the blazes firsthand as a volunteer firefighter and first responder for Station 40 of the Coastside Fire Protection District in Half Moon Bay, Calif. Certified as an apparatus engineer for the department, Fairbrother drives the station’s vehicles and acts as a pump operator, but depending upon the nature of the emergency, he’s often asked to perform a wide range of tasks.

Wildland fires covered a record-setting 4 million acres across California this year, and this past August, Fairbrother and his team were assigned to a stretch along State Route 1 near Pescadero, just west of San Jose. The particular fire began the morning of August 16 from the lightning strikes of a local thunderstorm, and the fire continued throughout most of September, burning nearly 135 square miles of land along the coast and in the Santa Cruz Mountains. The event claimed one life and destroyed nearly 1,500 structures in the process. Fairbrother and his crew spent several long days in challenging and changing conditions, containing the blaze and extinguishing spot fires.

The Alaska A320 pilot remarked that he’s worked on several California wildland fires during his six-year tenure with the department. He noted that on occasion, area first responders interact with air assets such as air tankers when fire-retardant drops are required and air ambulances to evacuate critically injured patients.

Best of both worlds

Growing up in the San Francisco Bay area, Fairbrother recalled that he wanted to be an Air Force pilot like his father. However, by his senior year of high school, Fairbrother no longer had 20/20 vision, a dealbreaker for anyone wanting to fly for the armed services at that time.

After acquiring his license, certificates, and ratings and building his flight hours, Fairbrother flew for SkyWest Airlines. He later went to work as a contract pilot for All Nippon Airways where he was based in Narita, Japan. After seven years with the carrier, he decided it was time to come home and applied to and was hired by Virgin America, which merged with Alaska Airlines in 2018.

Fairbrother moved to Half Moon Bay along the Pacific coast and, within a month, noticed a big sign in the town square indicating the local volunteer fire department was recruiting. He submitted his application and was hired. Volunteers supplement the work of the professional firefighters, who are on contract with the California Department of Forestry and Fire Protection (CAL FIRE). Both groups attend extensive training in preparation for their duties. 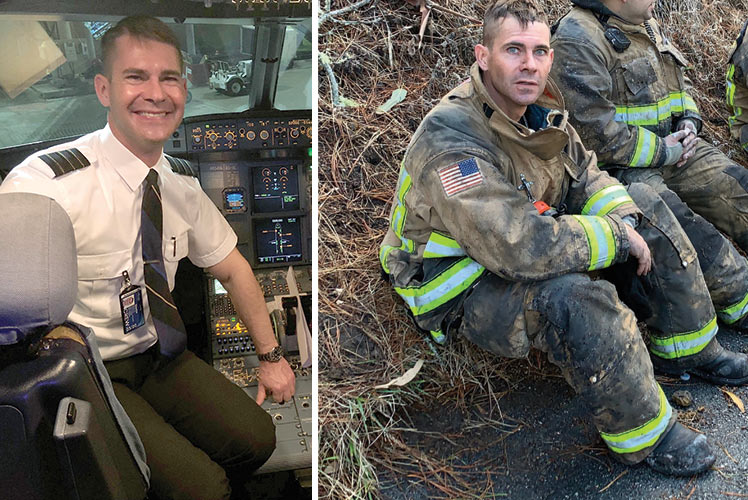 Left: Fairbrother in the cockpit of an A320. Right: Fairbrother takes a break after battling a fire with the Coastside Fire Protection District in Half Moon Bay, Calif.

Not for the faint of heart

Fighting fires and responding to other emergencies are physically exhausting responsibilities. There’s downtime when the crew handles office work and maintains and cleans equipment, but wearing heavy gear and dragging water-filled hose lines while responding to often-stressful emergencies, any time of day, require physical conditioning and a certain level of mental fortitude.

“When the fire tones drop in the station, the signal that there’s an emergency, you don’t know what you’re about to encounter,” observed Fairbrother. Every situation is different. “It takes a person with a hard shell and a soft heart to be a firefighter,” he remarked, adding, “It’s been said that we stand on the edge to keep other people from going over it.”

Of the Coastside Fire Protection District, Fairbrother mentioned that three stations are responsible for six towns covering approximately 50 square miles and serving almost 60,000 residents. The volunteer unit typically responds to structural fires, but on occasion deals with mass-casualty incidents, car accidents, cliff rescues, and aircraft incidents at the local general aviation airport. “In the wintertime, when the heavy rains hit, we pick up the extra calls the paid staff [as Fairbrother calls the station’s professional firefighters] doesn’t have the capacity to deal with,” he noted, adding that the days can be long.

“It was early morning on Thanksgiving 2018, and I was riding fourth on the engine with the paid crew,” the Alaska pilot remembered. “I’d been getting some on-the-job training, serving as an extra set of hands. It was the end of our shift, and I was looking forward to some days off.”

Fairbrother recalled, “The tones dropped for a structural fire about 4:30 a.m. so we had to respond. We were the second engine company on the scene and didn’t get cut loose from the fire until about 3:00 p.m. that afternoon.” However, on the way home, the Half Moon Bay crew was called on to conduct a cliff rescue for a local dog. “By the time it was all over, it was early in the evening and rather than go home, I stayed and shared Thanksgiving dinner with everyone at the station,” he said.

Having a bad day

“Keep in mind that people never call the fire department when they’re having a good day,” commented Fairbrother, who added that while he’s a first responder because he loves helping people, their circumstances can be emotionally draining.

“We’ve been called to put out fires at what could be considered hoarder houses,” Fairbrother said. “We’re talking about generally older people. They’re living on their own, they don’t possess the metal faculties they used to, and they don’t throw anything away. Heater cords run over the clutter, which catches fire, and these events often result in fatalities,” he acknowledged.

“We’ve also responded to cardiac-arrest calls, one that turned out to be an elderly man who’d been a bomber crewmember in World War II—as evidenced by all the photos in his den where he collapsed,” Fairbrother said. “His wife was kneeling by his side, holding his hand.”

Although the crew was performing CPR, the man’s wife refused to leave his side. “We had to work around her, which interrupted our usual choreography,” remarked Fairbrother, noting that procedures the team uses are well coordinated and routinely practiced.

“We respected her devotion so we didn’t ask her to move out of the way,” Fairbrother continued. “The only time she let go of his hand was when the paramedic applied the defibrillator. The man was transferred to the ambulance, all while CPR was still in progress and the wife was still holding her husband’s hand.” She rode with him to the hospital where he was pronounced dead on arrival.

“Dealing with death is always solemn, whether it’s assisting someone at a hospice who passes peacefully or responding to a horrific car accident that takes the lives of those who are far too young. But this one particular call stuck with me because of the wife’s stoicism and loyalty up until the very end,” Fairbrother said.

The A320 pilot’s volunteer company has a long-standing history in the community. The Half Moon Bay Volunteer Fire Department began operations in 1879 and was initially equipped with 300 feet of hose, a few buckets, and some axes. By the early 1900s, funds were approved for the purchase of additional equipment including a fire bell, which is currently on display in the town. The fire district hired its first professional firefighters in 1944.

On the lighter side

Fairbrother noted that there are happy moments on the job—assisting people locked out of their cars, mending children’s minor scrapes on the playground, and helping a needy animal.

And despite the stereotype, he observed that kittens rarely seem to get stuck in trees. “We’ve had cats caught behind commercial clothes dryers, trapped in car engines, and stuck in the wall of a kitchen that was being remodeled. The wall had to be demolished, but the cat came out safe and sound.”

It’s all in a day’s work for Fairbrother who—whether flying passengers to their destinations or putting out structure fires—lives his life in the service of others.