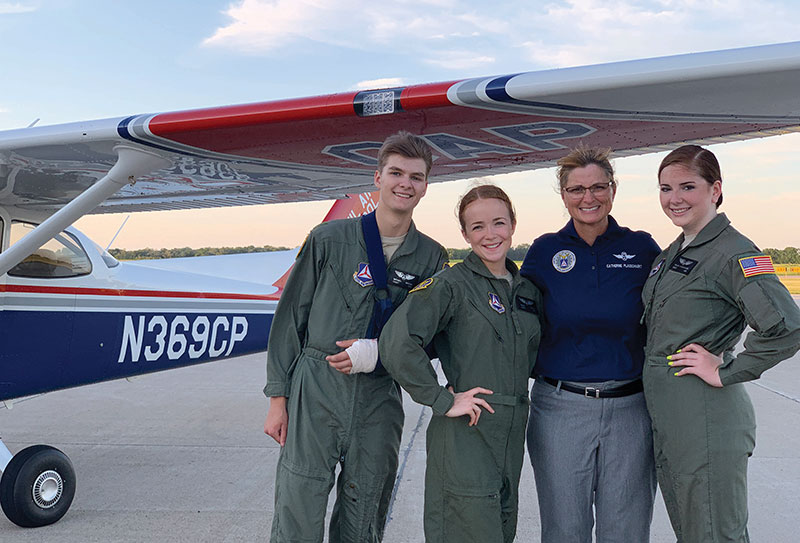 Capt. Cathy Plasschaert (Delta) truly loves to fly and openly shares this passion for aviation with others. In her free time, the Minneapolis-based B-757/-767 pilot serves as a deputy commander, character development instructor, assistant aerospace education officer, and major in the Mankato Composite Squadron of the Minnesota Wing Civil Air Patrol (CAP).

“It feels like a calling,” said Plasschaert, who said that when she isn’t working for her airline, she spends much of her free time introducing young people to flying through CAP and its Cadet Wings program. A product of the program herself, Plasschaert noted that over the years many of her students have revealed that prior to meeting her, they’d never thought about learning how to fly, let alone considered a career in aviation.

“Several years ago, I met a girl at a high school volleyball tournament my daughter was participating in,” Plasschaert recalled. “The girl was a senior in high school, and we struck up a conversation. I asked if she’d ever thought about flying for a living, and she admitted she hadn’t.”

In short order, the girl began flying with Plasschaert and earned her private pilot certificate (PPC). The Delta captain noted that the young woman is now a junior studying aviation at the University of North Dakota. “She’s finishing her certified flight instructor rating and hopes to someday become an airline pilot,” Plasschaert added.

So many students have no idea what they want to do with their lives, and many aren’t fully aware of the job choices available. For this reason, Plasschaert has made it her mission to promote CAP and Cadet Wings to others to ensure that they know about the potential career paths these programs open. 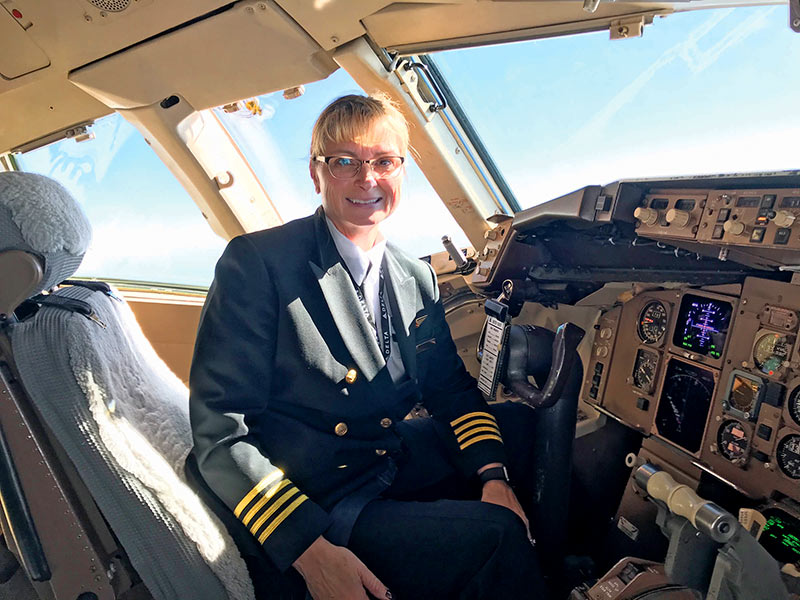 Plasschaert in a Delta cockpit.

Years ago, Plasschaert attended the graduation of an older cousin at the U.S. Air Force Academy and had dreams of following in his footsteps. She began flying with CAP when she was 13. Among other benefits, new cadet members receive five free hours of orientation flights. “I took my first flight and was hooked,” she said.

However, family issues compelled her to change her academic plans, and she became a student at Minnesota State University (MSU), where she also served as a flight instructor. After college, Plasschaert flew for then United Express carrier Great Lakes Airlines and later transported freight for Airborne Express. In time, she transitioned to Northwest Airlines, which in December 2009 merged operating certificates with Delta Air Lines.

Plasschaert left CAP while in college but returned once her career was firmly established. In addition to her other CAP roles, she’s on the national panel for Cadet Wings, which reviews candidate applications and helps cadets progress through the program. She also coaches the MSU Flight Team and serves as an FAA designated pilot examiner.

CAP is a nonprofit organization that serves as a civilian auxiliary of the U.S. Air Force. Founded on Dec. 1, 1941, CAP was created to help mobilize the nation’s civilian aviation resources in preparation for the likely engagement of the United States in World War II. Chartered in 1946, CAP took on five congressionally mandated missions: (1) To provide an organization to encourage and aid citizens of the United States in contributing their efforts, services, and resources in developing aviation and in maintaining air supremacy and encourage and develop by example the voluntary contribution of private citizens to the public welfare; (2) To provide aviation education and training especially to its senior and cadet members; (3) To encourage and foster civil aviation in local communities; (4) To provide an organization of private citizens with adequate facilities to assist in meeting local and national emergencies; and (5) To assist the Department of the Air Force in fulfilling its noncombat programs and missions.

CAP is probably best known for its emergency services and disaster relief support. It operates humanitarian efforts for organizations like the Red Cross, U.S. Customs and Border Protection, the Drug Enforcement Administration, and other public and private entities. Following 9/11 when all general aviation was grounded, one of the first airplanes to fly over the World Trade Center site in New York City was a CAP aircraft tasked with taking photographs of the damage.

CAP’s citizen volunteers are called upon to conduct search-and-rescue missions, offer aid in times of disaster, and work with federal, state, and local entities to keep the country safe. Although CAP owns and operates a fleet of Cessna 172 Skyhawks and Cessna 182 Skylanes, it primarily uses these for its education and cadet programs. Many emergency services pilots fly their own general aviation aircraft.

As part of its Youth Aviation Initiative, the CAP Cadet program includes nearly 1,000 hometown squadrons across the United States, with 6,500 trained adult volunteer mentors and approximately 23,000 cadets. Participants, who must be between the ages of 12 to 21, can rise to the level of cadet colonel by completing tasks in four different content areas: leadership, aerospace, fitness, and character.

Cadet Wings, a component of the larger Cadet program, was created with the specific intent to help young people earn their PPCs. This achievement is viewed as an important first step toward pursuing an aviation-related career. To be eligible, cadets must apply online, and selection is competitive. Once candidates are accepted, the Air Force funds much of their training and flying to help them earn their PPCs in aircraft, glider, or lighter-than-air balloon categories and classes. However, any cadet can join a local squadron and participate in flying, even if not selected for the Cadet Wings program.

According to the Cadet Wings student guide, “By providing financial support, constructing and adhering to a personalized flight plan, assigning a mentor, conducting periodic assessments to determine progress in the program, and evaluating quality of the instruction, this program will put [students] on and help keep [them] on a path to success.”

As assistant aerospace education officer, Plasschaert teaches and mentors new pilots and takes them on orientation flights. “For many of these young people, it’s the first flight they’ve ever taken,” she noted, adding that her intent is to show them the basics of flying and how the aircraft operates.

Plasschaert said she’s instructed and mentored hundreds of young adults all over the country, as well as one in Germany. “I’ve introduced so many students to flying, especially young women. There are currently 42 cadets in the Mankato Squadron, and nearly half are women. When they see a female pilot flying as a captain for a major airline, they begin to realize that it may just be a career that’s within their grasp.” 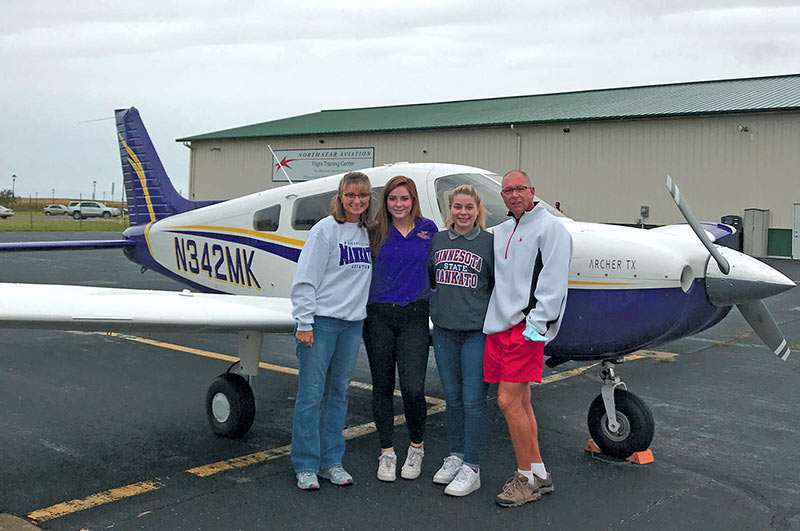 The Plasschaert family (from left, Cathy, Taylor, Tabitha, and Rick) are all either senior or cadet members of the Civil Air Patrol’s Mankato Composite Squadron.

Two of the women in Plasschaert’s extended mentoring circle include her daughters. Tabitha, an MSU sophomore, is working on her commercial certificate, and Taylor, a high school senior, is earning her instrument rating.

Plasschaert told a local news reporter, “The first time they soloed was exciting and stressful, as it is for every parent. But to see the excitement and that level of confidence on your daughter’s face once she parks the airplane and shuts down the engine is incomparable.” Both joined CAP when they were 12, and, like their mother, they, too, have been bitten by the flying bug.

“As an adult, one of the things I enjoy most about my role with CAP is seeing the excitement and confidence of young cadets as they solo for the first time,” said Plasschaert. “Watching them transition from zero flight time to soloing at 16 and earning their PPC at 17 is as rewarding for me as it is empowering for them. It’s a great program, a wonderful opportunity, and something I’m truly proud to be a part of.”

Interested in flying emergency services missions as part of the Civil Air Patrol (CAP) team or know someone who might want to enlist in the Cadet program? Visit the program's website.