Our Stories: Pushing the Envelope as a Blue Angel 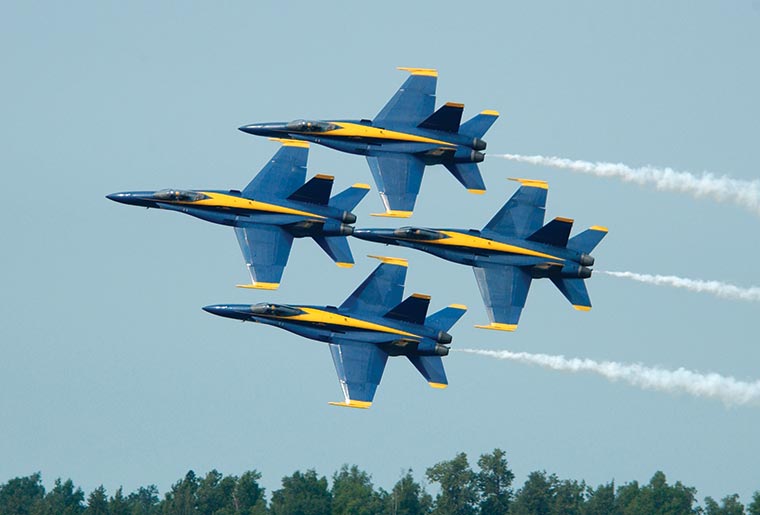 The Blue Angels perform their Diamond 360 maneuver in which the jets fly as close as 18 inches apart, in proper weather conditions.

Before his days as an airline pilot, F/O John Saccomando (United) was known to push the envelope on occasion. For two years, the Navy Reserve captain and Washington, D.C.-based B-767 pilot performed remarkable aerial feats as a member of the celebrated Blue Angels. Officially known as the U.S. Navy Flight Demonstration Squadron, the Angels are the world’s most famous precision flying team. When performing their Diamond 360 maneuver, they fly as close as 18 inches from each other. The job requires both physical conditioning and impeccable stick-and-rudder skills.

“Most folks who apply to the team do so multiple times because it’s extremely competitive,” said Saccomando, who flew an F/A-18 Hornet in the right wing or No. 2 position of the Angels’ diamond. “Being selected is based on your reputation in the fleet, your experience, and your record,” he noted, adding that it helps to have an outgoing personality. “A lot of the time at air show events, you’re placed at a table with 12 strangers and expected to make conversation and answer questions.”

Graduating from the Georgia Institute of Technology in 1994, Saccomando joined the U.S. Navy, briefly serving on a submarine as a midshipman before deciding he preferred the open skies. The fighter, tactical airlift, and instructor pilot eventually accumulated more than 5,000 hours of flight time, participating in 52 missions as part of Operations Enduring Freedom, Iraqi Freedom, Southern Watch, and Desert Fox. In December 2007, Saccomando became an airline pilot on the recommendation of a former Blue Angel.

Saccomando began his Blue Angel duty in 2003, shadowing the elite team for two months. “I eventually put on the blue suit and started flying basic smoke drills,” he said, adding that each Angel has a smoke generator installed on his or her aircraft, in place of the airplane’s cannon. Saccomando practiced flying with a second aircraft, turning his generator on and off in sync with the other airplane. “You want all six jets to perform together. You have to work on the cadence of the calls and other basics,” he noted.

With this preliminary stage of preparations completed, the Blue Angels moved from their home operations in Pensacola, Fla., to El Centro, Calif., where the team spent three months training together. The United first officer commented, “You’re flying two to three times a day, six days a week. That’s when you really get into the specific maneuvers.” Not surprisingly, practices continue throughout the air show season.

During his time with the Blue Angels, Saccomando performed in more than 72 cities before an estimated 20 million spectators. Along with the other pilots from his particular team, he was profiled in the Discovery Channel’s “Blue Angels: A Year in the Life.”

Of all the air shows in which Saccomando has performed, he shared that the San Francisco Fleet Week Air Show was the most memorable. “For every maneuver, we used Alcatraz as a center point, and it’s just beautiful. You’re in between the Bay Bridge and the Golden Gate Bridge with the skyline as your backdrop,” he observed, noting that the city’s unique landscape created a virtual theatre for the aerial performance.

Of his tenure with the world-class aerobatic team, Saccomando said, “It’s an exhausting tour. You’re on the road for 280 days a year, which is considered your shore tour. I finished and immediately returned to a fleet squadron based on an aircraft carrier.”

Saccomando shared that the Blue Angels have a quasi-celebrity status, particularly in the Pensacola area. “When you go out in public, people approach you. Kids ask for your autograph,” he said, adding that you always need to be “on” and ready to engage with the people you meet.

Despite the unique challenges, Saccomando acknowledged that flying for the Angels is extremely rewarding and that it’s an honor just to make the team. “You’re the face of the service. It’s a great chance to see the entire country and bring the Navy to the Midwest and places that don’t typically get the exposure to this branch of the military.” He added, “It’s also a lot of fun.” 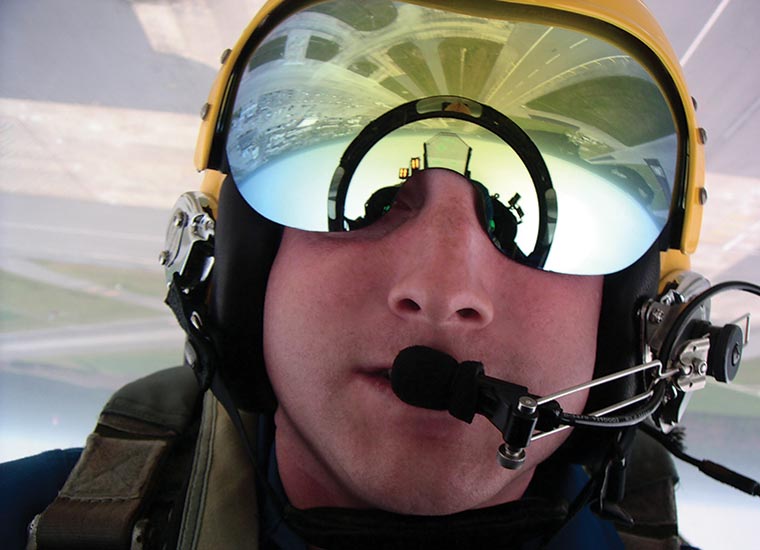