Our Stories: Around the World in 58 Days with Gina 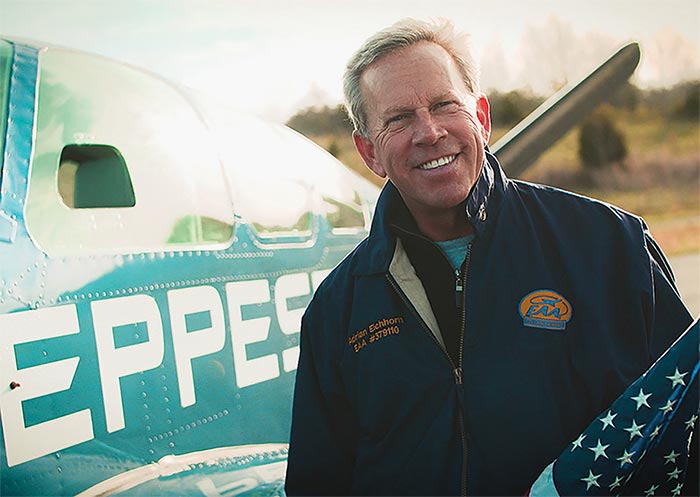 F/O Adrian Eichhorn (JetBlue) circumnavigated the globe earlier this year—but not as an airline pilot. He accomplished the feat flying solo across five continents and more than 23,000 miles in his single-engine Beechcraft Bonanza, a 1962 P35 model nicknamed Gina.

“I had no agenda, no cause,” said Eichhorn, adding, “This was a bucket-list item.” An outspoken advocate for general aviation, he noted that he hoped his far-flung adventure would inspire young people to take an interest in flying.

Eichhorn possesses an impressive background—one that, no doubt, helped him prepare for this eight-week odyssey. As an officer in the Army Corps of Engineers for 21 years who served as nuclear advisor to President Bill Clinton, he earned his pilot’s license and ratings in his spare time and later flew for the FAA, NASA, General Dynamics, and even the Washington Redskins football team. He also earned an FAA Gold Seal flight instructor designation and an A&P mechanic certificate with inspection authorization and was named the FAA’s National Aviation Maintenance Technician of the Year for 2016.

Nearly 11 years ago, Eichhorn decided to change course. “I always wanted to be an airline pilot, so I interviewed with a couple of companies and got hired by JetBlue,” he recalled. Now at age 60, he continues to fly general aviation aircraft and operates a small Bonanza and Baron maintenance facility when he isn’t spanning the country as an A320 pilot.

The idea of a solo trip around the world first came to Eichhorn in 2011 when he and six friends flew three Bonanzas north to Canada and across the North Atlantic into Greenland. Cruising at lower altitudes, they could clearly see the terrain below them and enjoyed great weather and trouble-free flying. Eichhorn acknowledged that the experience “whet my appetite” to do something more challenging.

Preparing for his global trek would take nearly two years. Eichhorn plotted a tentative route, carefully considering political climates and the availability of avgas, which can be hard to come by in parts of the world. He modified Gina, rebuilding the engine, adding a 100-gallon tip tank to each of the wings, removing the backseats and some of the interior to reduce weight, and installing top-shelf avionics. He added features like a Lynx NGT-9000 ADS-B compliant transponder, an Artex 406 MHz emergency locator transmitter, and a WX 500 Stormscope lightning detector. He also reskinned portions of the airplane, replacing patches on the 54-year-old aircraft and expanding the baggage compartment door. 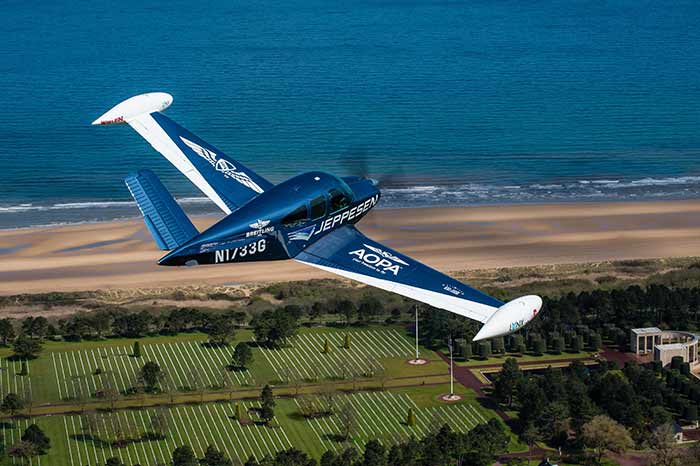 Eichhorn equips the Bonanza with 100-gallon tip tanks on each of the airplane’s wings to extend the distances it can fly.

On the morning of April 10, Eichhorn departed from Manassas Regional Airport in Virginia. As he arrived in Bangor, Maine, he discovered a small leak in one of Gina’s fuel injector lines. Fortunately, the problem was corrected before it could become more serious. He continued to St. John’s, Newfoundland, and then to the Azores.

Eichhorn tried to limit his flying to no more than 1,500 miles a day. “I wanted to fly during daylight hours as much as possible,” he noted, typically taking off at the crack of dawn but still spending two to four hours flying at night. Because he varied his routes, he booked hotel rooms a day or two in advance. “I’d arrive at my destination, take the next day off to rest, and use the Internet to find a hotel at my upcoming stop,” he said.

The retired lieutenant colonel charted part of his course over the Normandy coast of France, the site of the World War II D-Day invasion. He coordinated with Great Britain’s Flyer magazine to take photos of Gina while flying over Omaha Beach and the American cemetery, where nearly 10,000 troops are buried. Eichhorn acknowledged that he tried to imagine what the battle’s aviators must have been thinking as they viewed the same landscape.

He chose an easterly path for the trip due to his scheduled speaking engagement at Aero Friedrichshafen, a general aviation trade show in Germany. However, he would have preferred to follow the sun but didn’t want to feel pressured to make up time if circumstances delayed him. After several days in Germany, Eichhorn crossed the Alps and headed south.

After landing in Cairo, Egypt, he managed to get the airplane into a hangar just in time to avoid a sandstorm that engulfed the airport minutes after he touched down. “The visibility dropped to almost zero,” he said.

Once back in the air, Eichhorn’s support team in the U.S.—Capt. John Whitehead (FedEx Express, Ret.) and Dr. Bill Compton (also a pilot)—continued to keep him apprised of the weather since he didn’t have onboard weather radar or access to satellite weather datalink outside of the U.S., and ATC weather advisories in this part of the world weren’t available. They also talked to him about daily fuel usage and whether he should fly on any given day.

Eichhorn recalled that his flights across Saudi Arabia and around the tip of India were bumpy, but the roughest part of the journey was in Malaysia. “I dodged many thunderstorms, the likes of which I’ve never seen before, going into Kuala Lumpur. I was never so happy to be on the ground as I was that day,” he said.

Eichhorn selected larger airports as his daily destinations because of their access to avgas and available services, but he paid dearly for some of these facilities. In Dubai in the United Arab Emirates, he was charged $26 a gallon for fuel. And at an airport in Manila in the Philippines, he paid $3,347.84 for a landing permit, additional landing and takeoff charges, a quarantine fee, parking and lighting expenses, and other administrative costs. Aside from equipment that sponsors donated (whose names appeared on the airplane’s exterior), Eichhorn footed the bill for all of his expenses.

Eichhorn now set his sights on the island chains of the Pacific. Despite strong headwinds, the weather was good, and he maintained an average altitude of 9,000 feet.

Shortly after departing Amata Kabua International Airport in the Marshall Islands, his autopilot failed, so he had to hand fly for 15 hours to Honolulu, Hawaii. “It didn’t bother me during the day, but the last four hours after sunset were a real challenge,” he recalled.

Eichhorn’s final leg was his longest. On June 7, it took him nearly 17 hours to fly 2,135 nautical miles from Honolulu to Oakland, Calif. He kept his final destination under wraps and arrived unceremoniously, 58 days after he began his trip. Catching up on some much-needed sleep, he later flew Gina to a friend’s place in Reno, Nev., and jumpseated home to complete a few trips for JetBlue. Sometime later, Eichhorn flew the Bonanza back to Manassas, where he received a warm reception.

Recollecting an Oshkosh air show he attended many years before this trip, Eichhorn recalled meeting Burt Rutan, the celebrated aerospace engineer who designed Voyager, the first airplane to fly around the world without stopping or refueling. Eichhorn asked for an autograph and Rutan gladly complied, providing his signature, a drawing of Voyager, and an observation: “Adventure is the essence of life.” Clearly, Eichhorn took those words to heart.

This article was originally published in the December 2016 issue of Air Line Pilot.