ALPA Pilot Gives Back by Transporting Furry Friends in Need 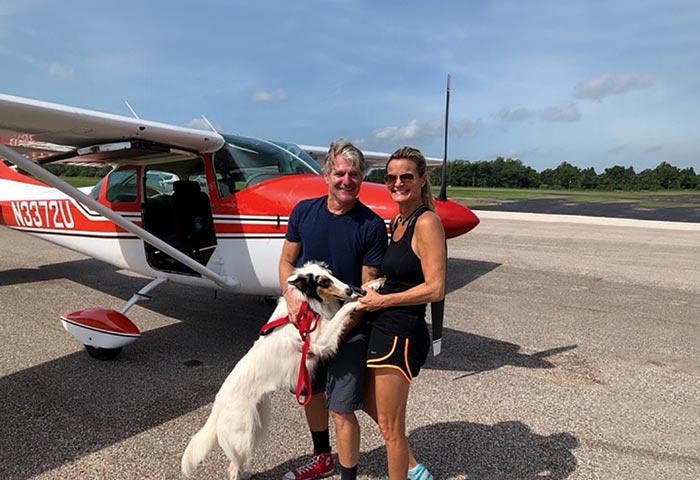 During these challenging times, many individuals are looking to help and offer support to those in need. Here’s how one ALPA member has been paying it forward, helping animals find their forever homes.

F/O Russell Goldman (Mesa) had been searching for a way to give something back to his community—a charitable opportunity to pursue during his off time from airline flying. “I was looking for a way to volunteer my time, and I own a Cessna 182 Skylane,” he said. “I considered assisting with disaster relief efforts, but it’s a complicated process to get involved with and difficult to schedule for.”

His search finally came to an end when he found Pilots N Paws®. “It’s a great way to help some of our furry friends in need and a rewarding experience, especially if you love animals as much as I do,” he remarked.

Pilots N Paws is a 501(c)(3) nonprofit organization that matches volunteers who want to rescue, shelter, and adopt animals with volunteer pilots and airplane owners willing to assist with animal transportation. The two groups work together to arrange rescue flights, overnight foster care or shelter, and other related activities.

“The organization is a perfect fit for me,” Goldman acknowledged. “I can choose my trips, and it gives me the opportunity to fly to different destinations and help animals at the same time.” He bids his airline schedule and then uses his days off to pick up Pilots N Paws flights.

“Most general aviation pilots don’t want to fly more than 300 to 400 miles because of the time commitment and expense,” Goldman pointed out. “Recognizing this, the organization has created a system in which groups of pilots cover different segments of a larger trip. You receive the pet and fly to a specified airport where you hand it off to the next pilot in the chain who then flies the next segment,” he said.

The charity’s website features a volunteer map and a transport map that allow volunteers to coordinate their activities. Individuals can use the volunteer map to see where pockets of pilots are located and send e-mails to solicit their help. “Pilots can access the transport map and specify days they’d like to fly. Colored arrows on the maps link to information about the animal, its circumstances, the organization coordinating the move, and other details,” observed Goldman.

“We typically schedule flights to smaller airports where it’s easier to get in and out of and where fuel is less expensive,” he continued. Pilots N Paws doesn’t cover pilot expenses, but the charity does provide large and small crates for the animals as well as leashes, collars, restraints, and similar items. The organization also informs pilots about any health conditions the animal might have and situations they may encounter.

While the work is voluntary, flights are considered “humanitarian” and pilots who fly rescue missions may be eligible to claim portions of their trip expenses as tax deductions.

Goldman isn’t always the only person working his particular segment of a trip. “Sometimes I’ll take a passenger along. Friends, as well as my mother, have accompanied me on many of the trips. But on other flights, it’s just me and the animal,” he said. As a Pilots N Paws pilot, he typically flies to destinations around southern Texas, occasionally making treks to nearby states like Arkansas. 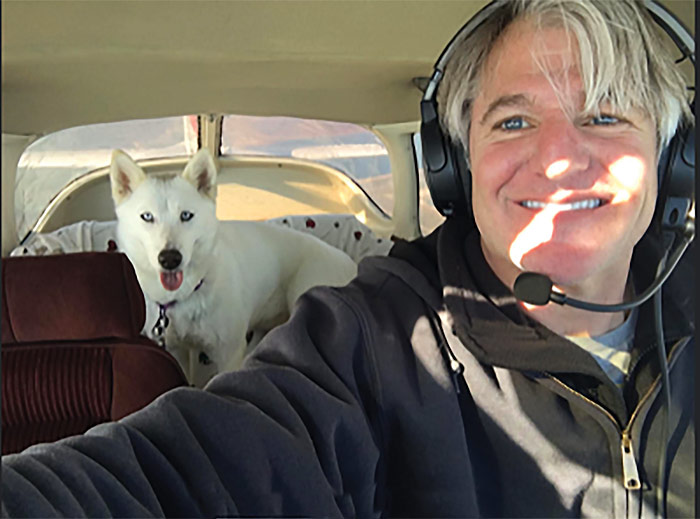 The Mesa pilot has only transported cats and dogs to date, but Pilots N Paws has delivered snakes, pigs, rabbits, rats, donkeys, and other creatures to new homes. Goldman remarked that if it’s a small pet and he has a “human” passenger, he might have his passenger hold the animal in their lap. Smaller animals are more controllable, and holding them can be reassuring. Older pets can be strapped to the back seat as long as they have reasonable movement and can’t interfere with front-seat activities. He noted that in many cases the animals fall asleep shortly after takeoff.

“On one of my flights, I transported an abandoned and lame dog to a lady who’s adopted several animals through our organization. With the proper care and environment, the dog is walking again,” Goldman said. “Pilots N Paws is an amazing charity, and it makes you feel good just to be a part of it,” he added.

In 2008, Pilots N Paws® founder Debi Boies, a longtime animal-rescue advocate, heard about a Doberman named Brock she wanted to adopt. Unfortunately, he was in a shelter in Florida and she lived hundreds of miles away in South Carolina. A friend offered to retrieve Brock and fly him to Boies in his airplane. She and the pilot subsequently founded Pilots N Paws of Landrum, S.C.

In its early stages, the organization grew rapidly because of public demand. For many years, shelters in the southeastern United States were overrun with stray or unwanted animals while many people in the Northeast and Midwest were searching for affordable pets. Pilots N Paws now has a network of more than 4,000 pilots who fly missions to the 48 contiguous states and, since its creation, the organization has saved more than 150,000 animals, including a dog named Sable who was hit by a car.

Instead of being taken to a veterinarian for medical attention, Sable and her puppies were dropped off at a nearby shelter. Fortunately, homes were found for the puppies, and a rescue organization located a family who wanted to adopt Sable. Recovered from her accident, she boarded a “freedom flight” and traveled to her new home and a brighter future.

The charity has also helped a female dog and her pups who were scheduled to be euthanized in Kentucky. A group of pilot volunteers flew the dogs on a series of flights until they reached foster care in Iowa.

According to Pilots N Paws, “Four million pets are euthanized each year in the United States because they’re no longer wanted or never found homes. Moving pets quickly and routinely out of overpopulated areas saves animals’ lives and opens up space for more to be rescued.”

If you’d like to help the organization’s rescue efforts, visit the Pilots N Paws website to learn more about the charity, make a donation, or consider flying freedom flights.