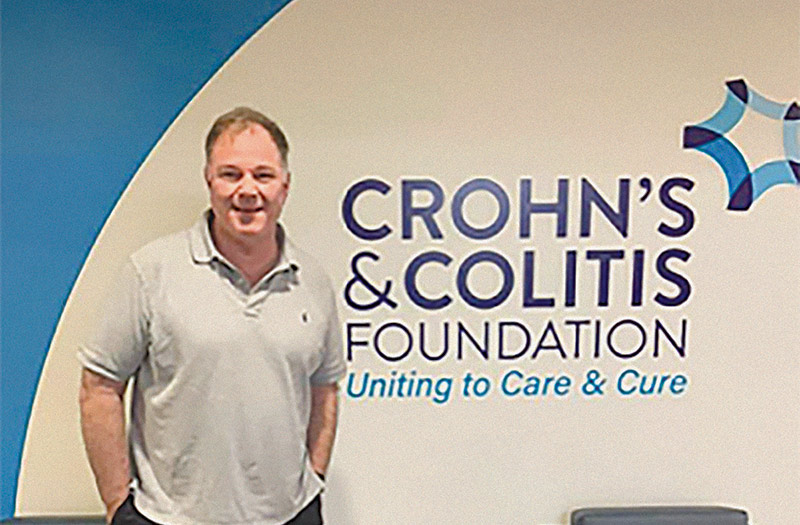 The parent of a child with Crohn’s disease, Capt. Kelly Strong (JetBlue) is a member of the Crohn’s & Colitis Foundation’s National Research Funding Committee.

For many who steadfastly support charities and social causes, their motivations are personal—including Capt. Kelly Strong (JetBlue). When he isn’t flying A320s for JetBlue, Strong is a fundraiser and staunch advocate for Crohn’s disease research. The New York-based captain’s 25-year-old son Benjamin suffers from the debilitating condition.

“We have three kids, but I always say our fourth child is Crohn’s disease because it’s been such a part of our lives for the last 17 years,” observed Strong.

“When Benjamin was eight, he started experiencing some health issues we couldn’t account for,” Strong said. “Sometime later, we were in Port Canaveral, Fla., preparing to go on a cruise when Benjamin began screaming from the shower that his stomach hurt.” He was taken to a nearby hospital where he was diagnosed with Crohn’s disease.

“There’s a real stigma associated with this condition because of how it affects a person,” remarked Strong. Along with ulcerative colitis, Crohn’s disease is one of two basic kinds of inflammatory bowel disease. A chronic, lifelong condition, Crohn’s can attack any part of the gastrointestinal tract, and those who have it typically alternate between absences of any symptoms to periods of painful flare-ups, which can last for days or even weeks.

The Mayo Clinic observes, “While there’s no known cure for Crohn’s disease, therapies can greatly reduce its signs and symptoms and even bring about long-term remission and healing of inflammation.”

When Benjamin was first diagnosed, Strong and his wife, Najwa, made an effort to thoroughly educate themselves about the disorder. They had Benjamin try a variety of diets, but nothing really made a difference. He began a steroid therapy but later switched to a biologic medication that significantly helped his condition.

Strong recalled Benjamin’s talkative nature as a child and how he participated in fund-raising galas that would have intimidated many his age. “At 10, he was speaking to 600 people at a black-tie dinner, talking about the disease, how it affected him, and the tremendous impact donations can have. I was so proud of him,” Strong acknowledged.

Benjamin also participated in Camp Oasis, first as a camper then later as a counselor. With a network of facilities across the United States, the camp provides a safe and supportive environment in which children with Crohn’s disease and ulcerative colitis can relax and enjoy themselves. Camp Oasis is sponsored by the Crohn’s & Colitis Foundation (CCF), a nonprofit, volunteer-driven organization dedicated to finding cures for the two ailments.

“Benjamin, who works as an intern at a federal courthouse, now, for the most part, has his condition under control,” Strong noted.

In addition to helping their son gain control of his disease, the Strong family continues to look for ways to support the larger Crohn’s disease community. Every year, they participate in the CCF’s Gulf Coast annual walk, Take Steps. Calling themselves “Team Benjamin’s Game of Crohn’s,” they’re routinely top fundraisers for the event. This year, the team raised $5,678.

Three years ago, Strong was asked to join the CCF’s National Research Funding Committee. According to the CCF’s website, “the foundation has invested more than $400 million in research toward cures since its inception.” Last year, the organization earmarked $31 million for more than 200 studies at over 100 U.S. and international institutions.

As a “stakeholder” on the committee, Strong periodically travels to New York where he works with a team of physicians to review and assess research proposals. Their decisions are then presented to a panel that determines how and to what extent the foundation’s funds will be allocated.

“I’m honored to be a part of this effort,” said Strong, who added, “It’s like working in a war room of geniuses all trying to help my son get better. We may not find a cure in his lifetime, but we’re making incredible progress.” And thanks to Strong’s efforts, he and the foundation are supporting universities, private-industry labs, and other organizations that are reevaluating the characteristics of the disease and developing new medications to help those who suffer lead happier and more fulfilling lives.

Get more information about the Crohn’s & Colitis Foundation or make a donation.