How ALPA Charted the Flight Path to Today's Safer Skies 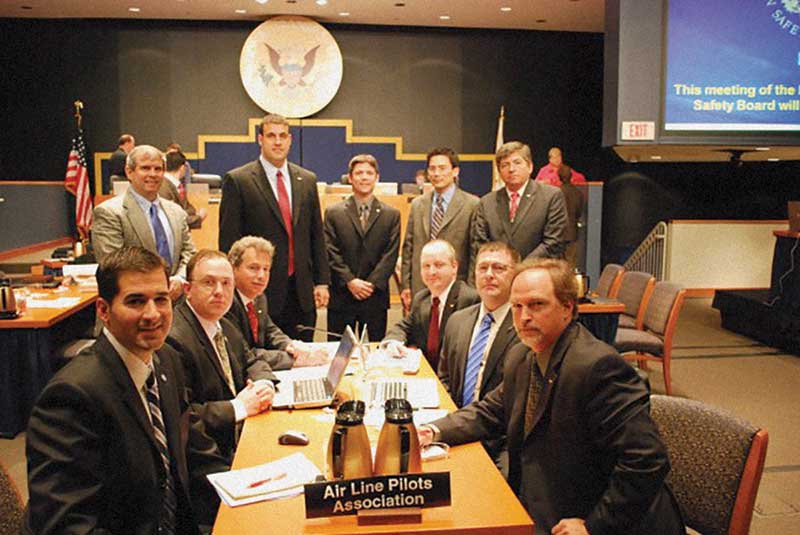 ALPA’s team of accident investigators convene during the NTSB’s hearing into the Colgan Flight 3407 accident.

Eight weeks later, on the night of Feb. 12, 2009, Colgan Air Flight 3407, operating as a Continental Connection flight, crashed on approach to Buffalo, N.Y. Fifty people were fatally injured, including all four crewmembers aboard the Bombardier Dash 8-Q400; the 45 passengers, including a nonrevenue Colgan pilot; and one individual on the ground.

The crash was the last in a series of four high-profile fatal airline accidents over a six-year timeframe in the United States, and the ensuing investigation introduced serious questions regarding numerous safety issues within the airline industry—particularly within the fee-for-departure segment.

With no committee structure in place, Colgan’s Master Executive Council (MEC) leaders turned to ALPA for help. The Association’s safety and accident investigation representatives from a half-dozen pilot groups made their way to the accident site in Clarence Center, N.Y., as the Association brought the full weight of its resources to help the Colgan MEC support the NTSB’s investigation. Within 12 hours of the accident, ALPA staff engineers and more than 20 pilot volunteers were on site and ready to work. Critical Incident Response Program (CIRP) team members were also dispatched to Colgan domiciles and to Buffalo, offering psychological support.

ALPA representatives participated on nearly every NTSB investigative group, providing their line-pilot expertise. Capt. Mike Wickboldt (Spirit) was in Newark, N.J., when he received the call. Then flying for Colgan, he recalled, “I was assigned to the NTSB Operations and Human Performance Investigative Group, traveling around the country to interview individuals who were involved with the accident, including management personnel, pilots who trained the flight crew, and pilots who flew the accident aircraft. The group focused on the operation of the aircraft, training, and the operation of the airline as a whole. It was a daunting task, but it proved to be a critical part of the investigative process.”

In its final report, the NTSB issued 25 recommendations and reiterated three previous ones issued from past investigations, ranging from pilot hiring standards and pilot training and qualification requirements to standards for science-based flight duty and rest and fatigue management to weather reporting. Many of these items were tasked to Aviation Rulemaking Committees (ARC) composed of government and industry stakeholders, including ALPA.

From the night of the accident through the law’s passage and continuing to this day, ALPA has been at the forefront fighting to ensure that the lessons learned from the Colgan accident are never forgotten.

The following are some of the notable safety advancements that were enacted as a result of the accident.

One of the most profound safety improvements was the increase in pilot training, qualifications, and experience requirements for those serving as a pilot in FAR Part 121 airline operations.

Before the law’s enactment, a pilot sitting in the right seat of an FAR Part 121 airliner needed a commercial pilot’s certificate and as few as 190 hours of flight experience.

Due to ALPA’s advocating for improvements and leading the call to strengthen pilot training and qualification requirements, the regulations were changed to require that all FAR Part 121 pilots hold either an airline transport pilot (ATP) certificate or a restricted airline transport pilot certificate (R-ATP). The R-ATP could be obtained at age 21 and with a minimum of 750 hours of flight experience, depending on the source of pilot training and educational background. Additional hours of flight experience are required for pilots trained through other pathways.

Another important outcome was a congressional mandate that the FAA develop and implement new science-based flight, duty, and rest regulations. ALPA worked tirelessly to ensure that line pilots from every segment of the industry served on the ARC, which was cochaired by ALPA, that crafted recommendations the FAA used to develop the proposed regulations. Pilots from several airlines helped develop ALPA’s response to the notice of proposed rulemaking (NPRM), reiterating the Association’s concerns about the many aspects that the final rule would need to address. Concurrently, ALPA leaders testified on Capitol Hill addressing the need to reform FARs concerning flight crew scheduling and personally visited key Members of Congress. The resulting rules, FAR Part 117, went into effect in January 2014, and similar science-based flight-time/duty-time regulations were recently approved in Canada.

Because the Colgan accident was ultimately attributed to loss of control, the FAA mandated that airlines provide, starting no later than March 12, 2019, additional training on upset prevention and recovery. The requirements to obtain an ATP certificate were also modified to include a new Certification Training Program course requirement. These new simulator-based training requirements also include performing manually controlled maneuvers and procedures such as slow flight, loss of reliable airspeed, and instrument departure and arrival, as well as upset recovery maneuvers and recoveries from bounced landings and from full stalls with stickpusher activation. In addition, following the accident ALPA led the charge to change stall recovery training to ensure that pilots are trained to focus on reducing the angle of attack versus maintaining altitude.

The FAA also convened an ARC to develop procedures for FAR Part 121 airliners pertaining to mentoring, professional development, and leadership and command training for their pilots. The still-pending final rule would require air carriers to provide new-hire pilots with opportunities to observe flight operations to increase their familiarization with procedures before serving as an operational flightcrew member. Curricula for pilots who are upgrading are to be revised to include mentorship training for all pilots in command, and Pilot Professional Development Committees are to be established to develop and oversee the airline’s full professional development program. Many airlines and MECs, with support from ALPA, have already implemented such programs.

While many air carriers had voluntarily begun developing safety management systems (SMS) to help identify and mitigate risks unique to their own operations, the FAA was tasked with mandating SMS for all FAR Part 121 air carriers. ALPA cochaired the ARC and supported the NPRM that was issued in November 2010 but highlighted the need for confidentiality in these programs and that the data provided not be used against employees in a disciplinary manner. The final rule, published in January 2015, required all FAR Part 121 airlines to have a fully functional SMS in place by March 9, 2018.

Since Feb. 12, 2009, there has been only one passenger fatality in FAR Part 121 airline operations.

Despite the many safety advancements that have been enacted, there are some industry stakeholders actively lobbying Congress and the FAA for a weakening of these vital rules purely for financial gain. However, pilots, the flying public, and the families of the Colgan Flight 3407 victims continue to vehemently oppose any watering down of these rules. Unwavering from their commitment to enhance aviation safety, nearly 100,000 airline pilots have actively opposed legislation to weaken these safety rules through ALPA’s Calls to Action, and some 40,000 individuals have sent letters to Congress to stop any attempts to diminish these critical safety regulations.

The safety regulations enacted in the wake of the Colgan Flight 3407 accident have contributed to the industry’s extraordinary 10-year safety record, and they must not be eroded. The facts are clear: 9 million flights per year, 2.5 million passengers per day, and zero pilot training–related fatalities on U.S. passenger airlines. The lessons learned from this accident were written in blood and must never be forgotten.

This article was originally published in the January 2019 issue of Air Line Pilot.