‘Reach Back and Help Out Someone Else’

Engaging members and future pilots at the OBAP convention

Building a stronger airline piloting profession is an ongoing mission of the Air Line Pilots Association, International and is of particular interest to both the Association’s Membership and Education Committees. As part of that mission, a contingent of ALPA pilots and staff representatives attended this year’s Organization of Black Aerospace Professionals (OBAP) 39th Annual Convention & Career Exposition, held August 12–14 in Arlington, Va., to connect with members, nonmembers, and future members alike.

The two committees, chaired by United F/Os Jolanda Witvliet (Membership) and Mark Haley (Education), are joining forces to find new ways to reach out and promote the profession, starting with the most important part—the people who make it possible. “We’re the world’s largest pilots union,” Haley said, “and our presence at these outreach events shows our support for the profession.”

Capt. Tim Eddins (United), a member of both OBAP and ALPA, commented that in today’s aviation industry continuing mentorship and education is even more important than ever before. “Mentorship programs provide a means for ALPA to truly help people,” he said. “ALPA has done a very good job of putting together a toolbox of resources” for pilots. Now it’s a matter of connecting pilots—current and future—to those resources.

That’s why it’s important for ALPA to attend these outreach events—to network and to let members know what’s available to them. Witvliet explained, “We can talk to ALPA pilots, answer their questions, and hand out [membership] pins.” But it goes beyond current members, she said. “We also reach out to non-ALPA pilots to explain the benefits of ALPA and offer some advice about getting hired by airlines that have ALPA pilots.”

With more than 1,200 attending the conference, the event included meetings, networking, and an extensive career fair, plus a popular Youth Day for local middle and high school students. Capt. Floyd Balentine (Endeavor Air) said he’s been talking to students about the piloting profession for 20 years. “A lot of them don’t think they can become pilots—or doctors or lawyers,” he said. Multiple pilots stressed the importance of kids seeing “someone who looks like me” in order to recognize a potential career path.

“Collectively as an industry, we need to start sparking the interest of our young people,” said Witvliet. “We need to promote a continuous interest in becoming a pilot—show them there is an opportunity for a fantastic career there.” 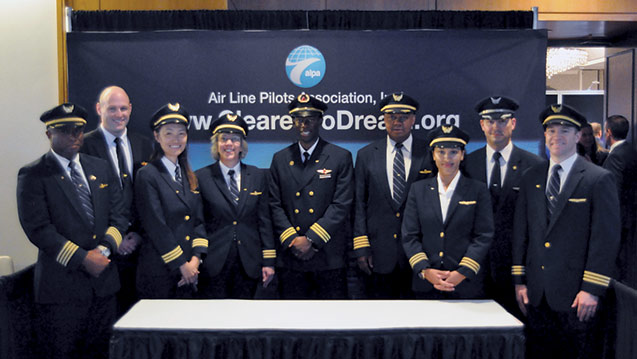 ALPA representatives talked to more than 150 local youth about the airline piloting profession, handing out advice along with ALPA goodies such as paper airplanes, pens, airplane-shaped pencils, and other giveaways. Smiling faces greeted the pilots, thanking them for being there and sharing their perspectives.

Mentoring: providing the inspiration to fly

ALPA’s booth was packed with pilots—all willing to give back and share their path to the cockpit. Capt. Ernie Taylor (Delta), a member of OBAP’s Board of Directors, explained that mentorship allows you to learn from the experiences of others. “There’s no need to reinvent the wheel,” he said—a message our pilot volunteers and other attendees at the event echoed.

Through organizations like ALPA and OBAP, the mere presence of airline pilots can inspire students and aviation enthusiasts alike. “OBAP and ALPA are both organizations I respect, and organizations I want to be a part of. They have common goals we can all work toward,” said F/O Marcus Neyor (Delta), an ALPA member who joined OBAP in 2007.

Neyor started building a strong network while in college. The biggest benefit, he said, was “meeting professionals in a place I wanted to be.” F/O Branden Dungy (ExpressJet) characterized mentoring as providing the “path of least resistance.” He explained that he did the research himself on how to proceed in his career—and now he can provide that information to others to help them avoid some of the mistakes he made.

Pilots who give back also said they felt a strong sense of responsibility as well—that because they were mentored, they have a responsibility to do the same in return. F/O Faye Matthews (United) explained that she hoped to provide inspiration to others, the idea that “if she can do it, I can do it.” Matthews spoke about seeing two black female pilots walking down a hallway when she was starting out in her career, and that simple act sparked the realization that she could attain her goal. Today, she often receives questions from students at ALPA Aviation Collegiate Experience (ACE) Club events about how as a wife and mother she achieves a work/life balance. By telling her story, she said, “They can see someone doing what they want to do” and it inspires them to chart their own path to becoming an airline pilot. 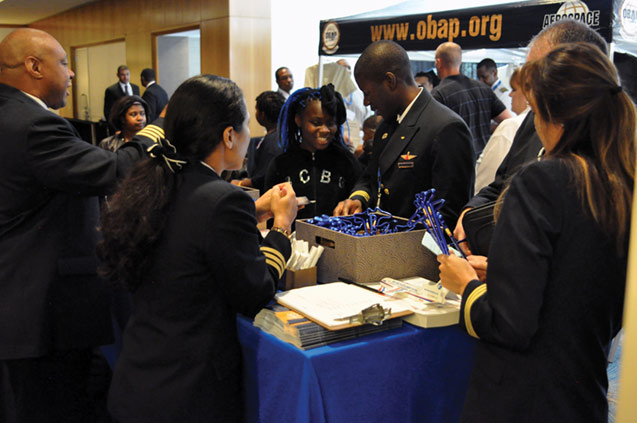 Haley emphasized that events like the OBAP convention are “an opportunity to mentor and educate the future generation.” In addition to the career fair for current professionals, the event included sessions for college students focusing on aviation. The OBAP Collegiate Series, co-sponsored by Alaska Airlines and Horizon Air, provided dozens of current students with expert advice and guidance.

Alaska F/Os Thomas Witts, Jesse Fitzgerald, and Marcus Williams spoke to the college students at the orientation session. Witts acknowledged that “because somebody helped me, I have a duty to help everyone else get there.” Fitzgerald added, “I love talking to the kids and seeing the look of ‘I want to be like that guy.’”

That general attitude—of reaching out, of giving back, and of paying it forward—permeated the OBAP convention. As Capt. James Gordon, the chairman of OBAP’s Board of Directors, said in opening the event, “Don’t just say ‘I got mine’—reach back and help out someone else.” 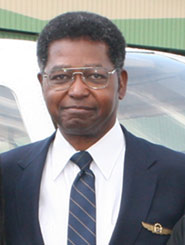 The Organization of Black Aerospace Professionals (OBAP) inducted Lt. Col. Tony Marshall (United, Ret.) into its Founders & Pioneers Hall of Fame during the 39th convention. Marshall served in the U.S. Air Force for 22 years and was held as a POW in Vietnam for almost nine months at the end of the war.

After retiring from active duty in 1990, Marshall joined United and flew for the airline for 16 years. Today he remains active in multiple mentorship organizations and activities. “One of the first people I met at OBAP, Bill Norwood, pulled me aside,” he explained. “Bill said, ‘Now that you’ve made it, congratulations. But you now have a new mission.’” He stressed the importance of reaching out to others. “Let them see a real live person who looks like them,” he said. It opens the door, and lets them know the path is there to become a pilot.

It doesn’t take a special event to reach out. Mentorship and education opportunities are available working with your master executive council (MEC) and local council, or just simply by providing your perspective to your colleagues. Capt. M’lis Ward (United) did not attend the convention but has volunteered for her MEC’s Training Committee and is a line check airman and standards captain. “As a woman pilot, as a gay pilot, as a black pilot, as a captain period, I’m a mentor to the people flying with me,” said Ward. “I’m trying to make them a better pilot, a better person, because I feel that’s what people did for me. We should all be mentors for everyone out there.”

Interested in giving back? Contact ALPA’s Membership Committee for more information. Also get in touch with your MEC or local council officers to see if there are mentorship programs set up with your airline or other opportunities for you to give back.


See more photos from the event on ALPA's Flickr page.