Every year, we ask members to submit their best “office views,” and the photos are always awe-inspiring.

Our Business Is Building Unity 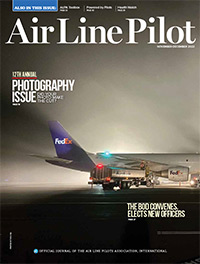 It’s been an honor to lead this union as we accomplished what many thought impossible during the past four years. Together, ALPA members fought through a government shutdown, the grounding and safe return of the B-737 MAX, and a global pandemic. We stayed on course, followed our strategic plan, and did what needed to be done.

When the pandemic struck, ALPA pilots not only led the public-health response, but we also lobbied the U.S. and Canadian governments for economic aid that would directly benefit airline workers. Through tremendous sacrifice and effort—including ALPA’s Call to Action appeal to Congress by nearly 250,000 individuals—the U.S. government provided $63 billion in relief to the airline industry and saved tens of thousands of jobs.

During the pandemic, our union also supported pilot groups in negotiating nearly 250 agreements to protect pilot health and financial security. As demand returned, ALPA fought for our pilot groups to share in their companies’ postpandemic success. At the same time, we welcomed 12 new pilot groups to our union.

Led by ALPA’s Air Safety Organization, our union has also thwarted attacks and made advancements on aviation safety. For example, we coupled advocacy with advertising to affirm that the United States has more than enough pilots to meet current demand. We also called out airlines that failed to train pilots to support the economic recovery.

Meanwhile, ALPA is moving ahead in establishing one level of safety and security across air transportation. We’ve scaled up our Cargo Committee to include the many pilot groups that fly passenger aircraft with cargo aboard. On the FAA’s NextGen Advisory Committee, I’ve objected to forcing pilots to use “ad hoc” procedures due to inadequately equipped aircraft.

In addition, we’ve successfully urged the FAA’s Advanced Aviation Advisory Committee to promote proactive safety cultures and inclusive language. As a member of the FAA’s Commercial Space Transportation Advisory Committee, I’ve also explained how airline pilots have created a data-driven, risk-based approach to safety and stand ready to assist spaceflight users to do the same.

This year’s more than 2,000 unruly passenger incidents on U.S. flights underscores the urgency of doing more to secure the flight deck. After years of delay, the FAA issued a proposed secondary flight deck barrier requirement for newly manufactured passenger aircraft. Absent a requirement, thousands of aircraft have already been manufactured without them. As a result, ALPA continues our call to retrofit existing passenger aircraft with these barriers as well as improve all-cargo aircraft flight deck security.

Our union has also pressed for additional funding to support federal flight deck officers and emphasized the safety benefit of jumpseating crewmembers on flights. In addition, ALPA developed Flight Finder, a search tool that’s helped pilots access jumpseats and advanced pilot-in-command authority. During our administration, ALPA also launched the Pilot Peer Support program to help ensure that all pilots in the United States and Canada are mentally prepared to perform their jobs.

Even as ALPA pursues this critical work today, no one is more committed to creating a robust pilot pipeline for the future. We’ve broadened ALPA’s Code of Ethics to include fostering “an environment of inclusiveness” and formed the Diversity, Equity, Belonging, and Inclusion Committee to work toward that goal.

Through these actions and others, including facilitating communication among fee-for-departure pilots who operate flights for the same mainline carrier and hosting events such as the National Gay Pilots Association Aviation Inclusion Summit, our union is building a stronger entry point to the profession and an inclusive workplace to inspire the next generation. At the same time, ALPA has spared no effort to make certain the United States maintains the first officer qualification requirements that have reduced U.S. passenger fatalities by 99.8 percent.

Internationally, ALPA has also championed the global labor movement in the face of pernicious antiunion efforts and supported the highest possible qualification and training standards for pilots around the world.

Just as on the flight deck, success can’t become complacency. Serious threats remain, including bids to allow reduced-crew operations. Our Reduced Crew Operations Committee conducts its work based on the principle that having two well-trained pilots on the flight deck is essential at all times.

Our business is building unity. Working as one, ALPA members have delivered on the promise of unionism over the past four years. Together, we’ve also set the stage for extraordinary achievement in the future.

Various groups under the four pillars of the Association’s Air Safety Organization and the Cargo and Remote Operations Committees.

How Congress Has Transformed the U.S. Airline Industry

On the Road: Frontier Pilot Motorcycles the World

The Making of ALPA's Strategic Plan