Commercial aviation is the world’s safest mode of transportation, and history shows that having at least two fully qualified, highly trained, and well-rested pilots on the flight deck is an airliner’s strongest safety asset. Airliners are designed for more than one pilot on the flight deck because safety and operations require it. Yet some special-interest groups continue to push for reducing the flight crew on board large aircraft—possibly down to even a single pilot—to cut operational costs.

Evidence, including more than a decade of study by the National Aeronautics and Space Administration and the Federal Aviation Administration, shows that the safety risks and challenges associated with single-pilot operations far outweigh any potential benefits.

Pilots on board an aircraft can see, feel, smell, and hear many indications of an impending problem and begin to formulate a course of action before even the most sophisticated sensors and indicators provide positive indications of trouble. A minimum two-person flight crew is necessary to manage the flight deck workload and protect against the potential incapacitation of one pilot. Placing a second crewmember in a remote location would jeopardize the quality of crew resource management and crew coordination. It would also put the lives of people on the aircraft—and on the ground—at great risk.

In a public survey conducted in 2018, 80 percent of respondents agreed that two pilots working together is the best option when it comes to problem solving while operating an aircraft. And 81 percent said they would not be comfortable on a plane that was completely pilotless.

Pilots and the American public understand that air travel today is the safest means of transportation, and we aren’t willing to jeopardize lives just to maybe save a buck.

Save a buck or save a life—that’s the choice. 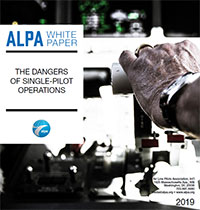