Flying During the Eclipse? Safety Information for Crews (and Passengers) 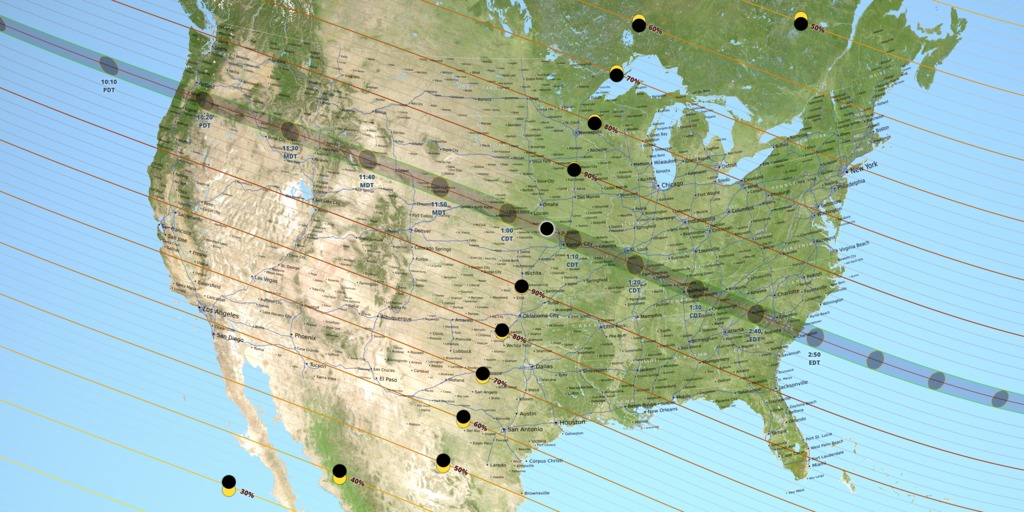 This map of the United States shows the path of totality for the August 21, 2017, total solar eclipse. Credits: NASA

There will be a total solar eclipse of the sun visible from coast to coast on Monday, August 21, 2017. ALPA has spoken with scientists from NASA to compile this Q&A with some facts and advice for any crewmembers—and of course, passengers—who may be in the flight path of the eclipse at the right time.

How or when can passengers and crew safely look at the sun during the eclipse, and what advice can I provide to those on board?

The only time it would be safe to look at the sun during the eclipse is during the brief period of totality (2–3 minutes) when the sun is completely blocked by the moon. At all other times—meaning any level of partial eclipse—one needs to use glasses specifically designed and certified (by ISO 12312-2) or with #14 welders glass or darker. This is extremely important to emphasize, as even briefly looking at the sun during any other phase could cause permanent damage to your eyes. NASA has provided a list of reputable vendors (see “Reputable Vendors of Solar Filters & Viewers”) from which to purchase glasses, as there are a number of fraudulent offers out there.

An alternative method to view the eclipse if one does not have the special glasses is through a pin-hole camera. There are many effective designs found online. Some may work through the windows of planes. Print location-specific designs.

ALPA recommends that you advise passengers that the only safe time to look at the sun without special glasses is during the brief period of totality. At all other times, they must use safety glasses or risk injury to their eyes.

Because of the risk of injury and for passenger and crew safety, both NASA and ALPA advise flight crews not to make any maneuvers to assist in viewing the eclipse.

It is important to note that the same eye protection is required for non-eclipse days as well—there will be nothing especially intense about the sunlight on the day of the eclipse.

How long will the eclipse last?

For any particular location, the eclipse itself will last for several hours, but the period of total eclipse (“totality”) will be only be 2–3 minutes.

If flying perpendicular to the path of totality (north-south), one side of the aircraft will have a potential view of eclipse, the other side with only see the shadowing effects on the cloud cover below or on the ground. If flying parallel from generally west to east, you will be traveling with the direction of the path of totality, so the eclipse will last a bit longer; if flying east to west, you are generally flying into the path, and it will be shorter.

This interactive map allows you to select a static location, and it will provide the start of the partial eclipse, the start and end of totality, and the ending of the eclipse. Pilots can refer to this to get a better idea of what parts of their flight may be affected and the timing of potential impact.

What can pilots expect?

If you are in the path of totality (70-mile-wide swath), expect fairly dark conditions, perhaps as dark as night, with a full moon. Further away, expect it to be similar to early dusk or late sunset . . . further out, increasingly lighter conditions.

The further west one is, the lower on the horizon the sun will be during the eclipse. The further east, the higher in the sky. For example, in Salem, Ore., during the time of totality, the sun will be at about a 40-degree angle from the ground—meaning that those sitting by a window will have to look up at a fairly good angle to see the totality. The further east one is, the higher in the sky it will appear, for example, Charleston, S.C., will be at an approximately 61-degree angle.

At that angle, even those in window seats may have difficulty seeing the eclipse, but they will see the shadowing effects on the ground or cloud cover, depending on weather conditions.

During the eclipse period, visual elements will be darkening of sky, and pilots can expect nighttime landing conditions during totality within the path of totality. Just before and after totality or outside the path will experience dusk-/dawn-like conditions to dark, overcast-like conditions. Pilots should be vigilant and ask that airport lighting and other nighttime visual aids are turned on during low ambient light conditions. View simulation maps.

Will ATC do anything out of the ordinary?

In general, it is expected that airports within and near the path of totality will experience heavier than normal traffic, with higher than normal general aviation traffic. At this time, ATC is not anticipating any change to normal operations; however, there may be advisories issued prior to August 21, so be alert for those.

ALPA pilots who have any questions about this information should contact ALPA’s Engineering & Air Safety Department at 800-424-2470 or EAS@alpa.org.