Capt. Beau Brant (United) plays the piano in Concourse B of Denver International Airport in January 2022.

If music is the universal language, Capt. Beau Brant (United) has been sharing his personal message with travelers in cities around the world for nearly 20 years. A longtime professional piano player, Brant has been known to explore hotel lobbies in cities from Zurich, Switzerland, to Sydney, Australia, looking for a keyboard to play blues, classical, and jazz melodies, all from memory.

In recent years, pianos have become a regular feature at many international airports, whose cavernous concourses are ideal for transmitting the musical instrument’s distinct acoustic tones without the need for speakers or amplification. Brant periodically takes advantage of his time between flights to play old favorites as well as his own personal compositions. 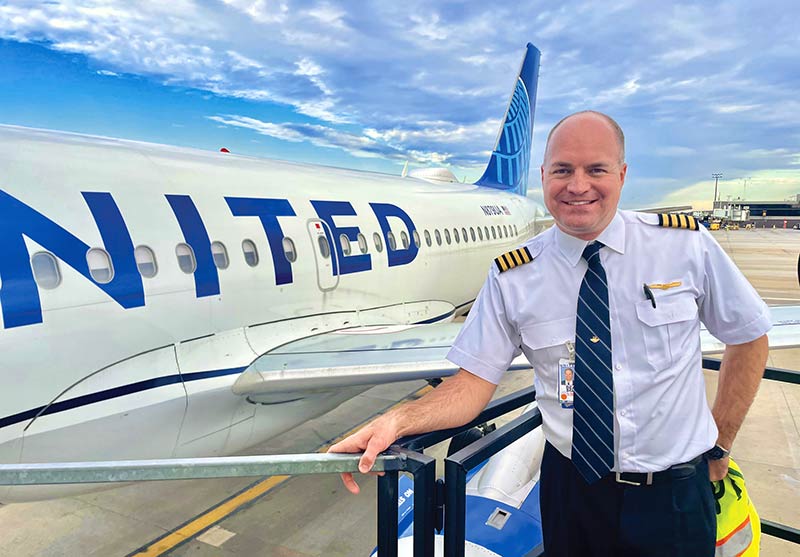 Brant beside a United A320 at Hartsfield-Jackson Atlanta International Airport.

Brant began his extended tour of hotel lounges, lobbies, and airports in 2005 after a flight from New York to Frankfurt, Germany. He arrived at the layover facility to find that hotel rooms for the pilots and flight attendants wouldn’t be ready for another hour. He saw a beautiful piano in the lobby and began playing for the crew of 12. Others soon gathered around to hear him tickle the ivories.

While Brant has built an enviable reputation for his musical mastery, a column that appeared in a national newspaper last year dramatically catapulted his popularity. Brant recalls, “While playing in the restaurant of a Cincinnati, Ohio, hotel, a man approached me after I finished the set and said, ‘I heard from the wait staff that you’re an airline pilot on a layover and I thought you were a regular player here.’” The conversation prompted a host of questions from the amazed reporter, which led to the subsequent article.

Since then, Brant has been regularly featured in the news. Just last month, he appeared on the NBC Nightly News with Lester Holt and on the KXRM-TV, Fox21 News morning show Loving Living Local in Colorado Springs, Colo., not far from where he lives with his wife and children. Brant played four original songs during the latter broadcast and later posted them on his Facebook page.

Brant grew up in Evergreen, Colo., where he was exposed to both the piano and flying at a young age. He began playing at the age of three and took lessons by the time he was five. At 12, he was being paid to perform at birthday parties and at local hotels and restaurants. He also began taking flying lessons at the same age.

The Evergreen neighborhood where Brant grew up included more than a half dozen airline pilots, many of whom worked at the United Airlines Flight Training Center in nearby Denver. “I took a ride in the facility’s DC-8 simulator as a child and was forever hooked on aviation,” he says.

Brant graduated from Metro State University of Denver with a B.S. degree in aviation and aerospace science. “Let’s face it, learning to fly is expensive,” acknowledges Brant. “My family confronted several financial challenges, prompting me to pay for much of my flight time with music gigs.”

After three years at Air Wisconsin on the Canadair CL-65, Brant went to work for United Airlines in 2005. Since then, he’s flown the B-757, -767, and -787 before moving on to the Airbus A320 and North American routes. His current favorite locations to play the piano include hotels in Richmond and Norfolk, Va.; Madison, Wisc.; Calgary, Alb.; and, of course, Cincinnati. 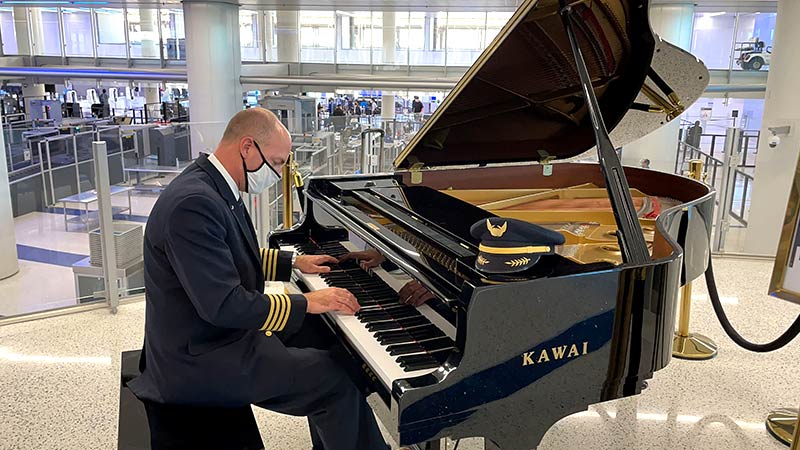 Seated at a Kawai grand piano, Brant plays in the lobby near Terminal 7 at Los Angeles International Airport.

“There’s an art to flying as well as playing music,” Brant observes, highlighting the similarities. “Both operate in environments with strict limits and boundaries, and standard operating procedures must be followed. However, in both cases, you’re still able to apply your own personal touch—something that distinguishes your work from others.”

Over the years, Brant’s musical aptitude (he also plays the drums) has provided him with several opportunities. He appeared in a United Airlines social media commercial in April 2020, which was posted on Facebook, Twitter, and Instagram. The ad began, “We all share one big beautiful sky. For a brief minute, let us transport you to the clouds with ‘Rhapsody in Blue’ performed by United Captain Beau B., set to footage provided by our employees from their previous travels.”

In 1999, one of his recordings was used in a fundraiser for Oprah Winfrey’s Angel Network, a public charity that encourages people around the world to make a difference in the lives of others. In addition, Brant has performed for some interesting audiences, including former U.S. President Gerald Ford in Vail, Colo., in 1992.

When he’s not flying the line, playing the piano, or raising a family, Brant is an active ALPA volunteer. He’s served as a master executive council (MEC) and local executive council (LEC) webmaster, an MEC and LEC Communications Committee chair, and a Pilot-to-Pilot® Committee chair. He occasionally participates in Education Committee activities, making presentations at his alma mater. The A320 captain has also found time to work with his airline’s new Aviate Academy, mentoring the airline’s future pilots.

Asked about his dream performance, Brant says, “I would love to have played in one of the glamourous upper-deck lounges of a B-747 during the early 1970s. During a break on a long-distance flight, I could envision myself playing for first-class passengers enroute to some exotic destination.”

While at the hotel on your next layover, keep an ear out for this piano-playing pilot. 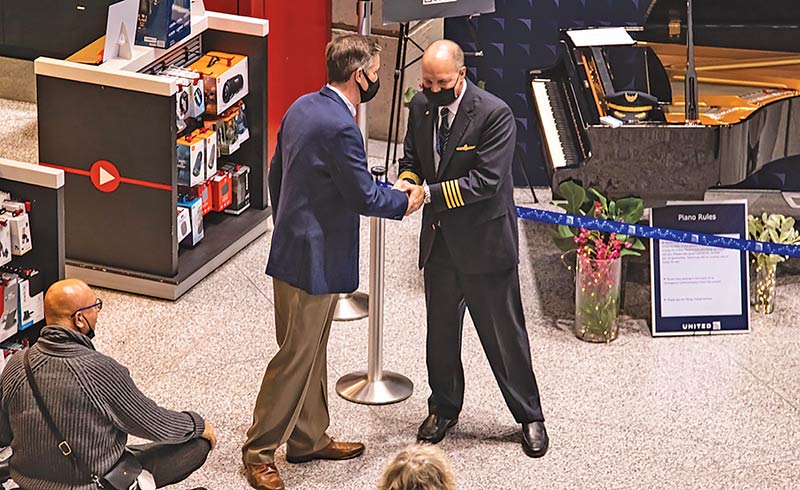 At a media rollout at Denver International Airport, Brant shakes hands with a United customer service representative before playing at that location for the first time.

Capt. Beau Brant (United) has produced seven albums in 26 years, including 80 original songs—many of which are available on music streaming services including Apple Music and Spotify.

To learn more about Brant and his music, visit his website for videos, a list of upcoming performances, and other information. Hear him perform Ludovico Einaudi’s “Primavera” in Concourse B of the Denver International Airport in January 2022.