Capt. Kevin Houser (CommutAir) has always considered himself a team player, whether serving as a pilot recruiter, line check airman, or ground training and simulator instructor for his airline or as a professional football player with the National Football League (NFL). Prior to flying for CommutAir, Houser spent an amazing 11 years as a long snapper for the New Orleans Saints, Seattle Seahawks, and Baltimore Ravens.

“The long snapper is a special teams’ specialist who hikes the football to begin play during punts and field goal and extra point attempts,” explained Houser, “and I was typically in the game for 10 to 12 plays.” He was acquired by the Saints as the 22nd pick during the seventh round of the 2000 NFL draft. Prior to the pros, Houser was a long snapper, tight end, and four-year letterman at Ohio State University.

Houser was a Saint from 2000 to 2008 before being traded to the Seahawks for the 2009 season. He suffered an injury during a December game against the Tampa Bay Buccaneers that ended his season. The following year he was picked up by the Ravens. 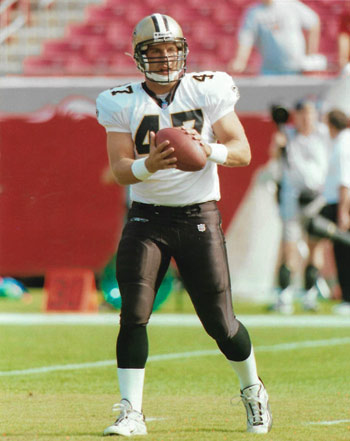 “I knew I was playing with house money at that point,” Houser recalled. “Most players last three years in the league. I lasted 11. You know that as you get older, your time is coming. That’s just part of the business.”

However, Houser didn’t end his career unprepared. A longtime fascination with flying beginning with a childhood trip on a Piedmont Airlines B-727 and a chance discussion, years later, with a United B-737 pilot at his son’s soccer game prompted the special-teams player to take action. While still playing football, he learned to fly. “My wife gave me the green light, and I completed my private, instrumental, commercial, and certified flight instructor certificates,” he said.

“In the back of my mind, this was always going to be my endgame,” commented Houser, who added that he thought long and hard and wanted to pursue something he’d enjoy—flying and teaching/coaching. On that first flight he took as a child, he and his brother were invited up to the cockpit during the aircraft’s cruise phase. “The pilots were gracious and encouraging. At that point, I was hooked,” Houser said.

In March 2015, he was hired by CommutAir and has been with the carrier ever since. “The training was intense, but just like with football—in the end—the sacrifices are worth it,” he acknowledged.

The Embraer E145 captain noted that the two professions have much in common. “The routine is that nothing is ever routine,” he observed. “There’s a special rush that comes with stepping onto a playing field or inside a cockpit,” Houser noted. Weather can change your game plan as a player and as a pilot. And both football players and airline pilots operate under a microscope when it comes to their health and performance.

Most of all, airlines and football teams both require a strong sense of cooperation and teamwork to be successful. “It’s truly a collective effort,” said Houser, adding, “You’re all working toward one goal.”

Houser observed that his aircraft’s 25-minute airport turns require the coordinated effort of pilots, customer service agents, flight attendants, baggage handlers, aircraft cleaners, ramp service workers, and a host of others behind the scenes. “Look at how much has to happen,” he commented. “Every one of these people is essential.”

Not surprisingly, the former NFL player has looked for ways to give back to his community including serving as the president of the Westlake Youth Football Association in Westlake, Ohio, where he grew up. In addition, Houser and his wife, Kristen, cofounded the Life’s a Snap charity foundation, which offers financial assistance to hospitals and other organizations that provide services for children with serious or life-threatening illnesses.

Putting things in perspective, Houser shared, “I’m happy to help others. A million people helped me get to this point in my life. I feel very fortunate, very blessed.”