On Aug. 1, 2020, the Frontier Airlines Master Executive Council (MEC) announced to its pilots that they could now use ALPA’s Data Action Report (DART) program to get answers to any work-related questions they might have.

While the Frontier pilots took to DART relatively quickly and seamlessly from the beginning, the true test of the program was yet to come—a test the pilot leaders specifically selected DART to address.

DART is a program offered to MECs by ALPA national that can be personalized by each MEC for its specific needs. Pilot group leaders decide which categories of questions will be available to their pilots and assign subject-matter experts to those categories.

They can also make minor adjustments to the DART forms on a category-by-category basis within their MEC to personalize the program even further—such as including explanatory text, removing questions that aren’t applicable to a specific category, and inserting FAQs or additional questions. ALPA’s IT and Communications Department staff members then work together to implement the system as requested by the MEC.

At Frontier, this personalization was what drew the MEC leaders to DART and convinced them that it was the best tool to use to address an upcoming change for the pilot group.

On Dec. 1, 2020, Frontier would be switching to a preferential bidding system (PBS), a change that MEC leaders knew would be difficult and stressful to implement—but valuable once completed. Capt. Todd Bole, the pilots’ Communications Committee chair and a member of ALPA’s Information Technology Advisory Committee, immediately saw the advantage of using DART to address this issue.

“We had authorization from the MEC to proceed with DART last March,” Bole explained, “but we wanted some upgrades made to the program before we came on board. We needed them ready by August 1 so that we could be up and running and comfortable by the time PBS was implemented.”

“The use of DART perfectly complements our MEC philosophy of leveraging technology to elevate the quality of representation to our pilot group,” commented Capt. Brian Ketchum, the pilot group’s MEC chair. “DART especially aligns with our focus of building an institutional knowledge base for future MEC leaders and volunteers to draw from.”

And what makes DART such an effective tool to answer questions about PBS? “DART has that question-and-answer platform,” Bole remarked, “but the great part about its functionality is the retention—when a pilot submits a question using DART, it becomes memorialized. With DART, other subject-matter experts can review past information to find the answers for similar questions. It provides historical knowledge that can be applied to future questions.”

This was an important distinction from the MEC’s previous method of communication. “Our prior method was a basic Pilot Data Report system,” said Bole. “It worked well for archiving questions, but it didn’t have the functionality of letting us know if an issue was truly resolved. DART not only lets us know that questions are answered, but it also stores the answers. It’s essential to know that you’re actually following up with your pilots when they have a question or issue. In addition, we have a record of the answer that we can use in the future. It’s a service to our MEC and a huge benefit to our pilot group.”

Bole discussed the DART program with Capt. Matthew Pease, the MEC’s PBS Committee chair, and explained how he thought it would ease the strain of PBS implementation. “I was very concerned about the quality of bidding help that would be available and how we could monitor it,” Pease acknowledged. “DART gives us the capability to answer any questions the pilots might have, which allows the trainers to do their work instead of having to spend time answering a thousand phone calls.”

Together, the two came up with a few schedule-related categories of questions and assigned subject-matter experts to them. The most popular category by far, as expected, is PBS—Bidding Help.

Early and constant promotion was one of the keys to the MEC’s use of DART for PBS questions. “In every PBS communication we put out, we encouraged pilots to use the DART system to answer their PBS questions,” explained Pease. “Even when someone called, we asked them to throw us a DART—we wanted to have that collection of trackable information.”

While the PBS system was slated to officially open for December scheduling, the MEC decided to have four mock-bid sessions to allow pilots to get used to the system and to ask questions.

“We started mock bids on September 22 and did four rounds—approximately 1,600 pilots at a time,” Pease noted. “After the first round, most of the DARTs we received were about how to do something specific, how to handle certain requests,” he added. “Then after the mock bids were awarded, we received numerous questions from the pilots about why they were given certain schedules and how to make adjustments.”

Each mock bid was for the same month, December, and as the practice sessions continued, fewer questions were asked. Then in early November, the actual bid started for December.

Figure 1 shows the large spike in DARTs that occurred in conjunction with the official implementation of the PBS system, with a high of 74 in one day. It also shows the four mock bids in September and October and a bump in the line graph for each one, as well as a smaller spike representing queries that came in when pilots were making their January 2021 schedule in early December.

Frontier pilots were also using DART for other issues, but by far their main questions centered around PBS. Figure 2 shows that questions about PBS—Bidding Help outnumbered every other DART category combined.

“DART was most helpful for me, at first, because it put everyone in line for help,” explained Pease. “It allowed us to respond in order and help the pilots. And when they asked specific questions, we were able to thoroughly research the questions before reaching out to them. As a result, we didn’t feel pressured into giving an immediate response to someone who was on the other end of a phone.”

The system was especially helpful during the peak times highlighted in Figure 1. “Any time there’s a huge surge, it’s nice to know we have DART working for us and keeping everyone organized and on point,” Pease said.

“There were a few times when I wasn’t available to answer questions,” he noted. “My phone just kept dinging with e-mail notifications, and I was concerned that pilots were waiting for a response. But when I entered into DART, I saw that every issue was already being worked on by a subject-matter expert. Everyone was doing exactly what they were supposed to be doing, and the system worked exactly the way we needed it to.”

Even though the pilot group is now past the initial surge, Pease thinks the PBS—Bidding Help category will continue to be useful. “This will be very helpful when pilots return to the property from the leaves we negotiated during the pandemic,” he said. “With the DART system as our primary method for answering questions, we’ll be well equipped to help returning pilots avoid issues their colleagues have already gone through.” 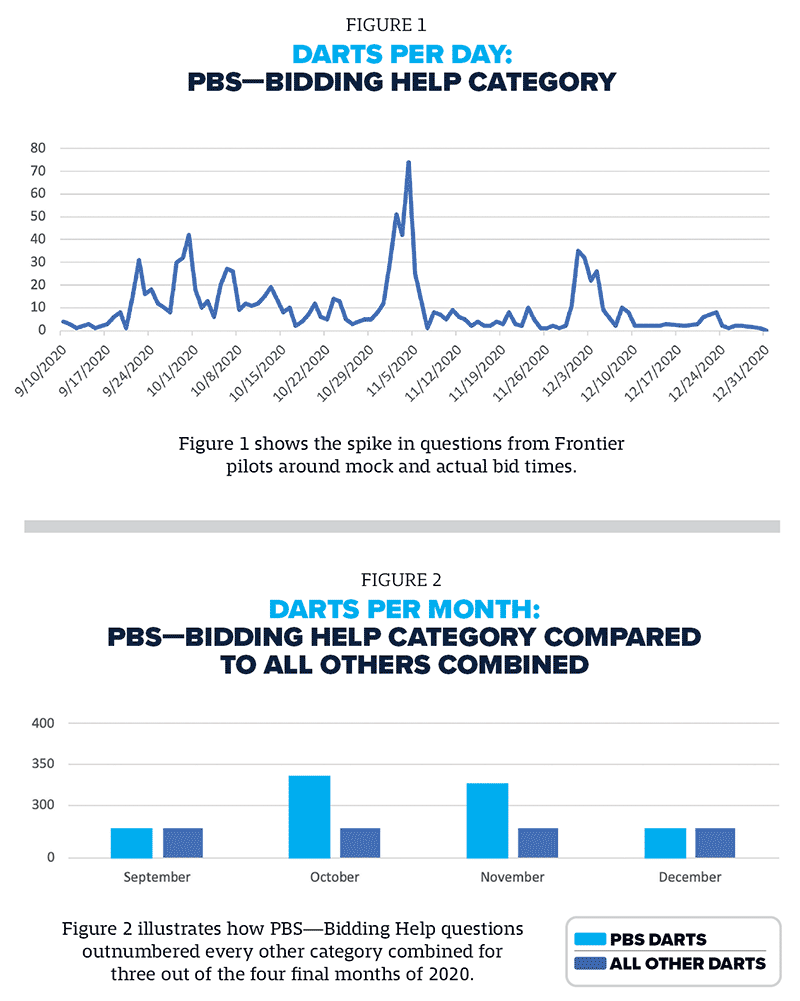 This is just one example of how DART can help MECs address a specific issue while also being an important organizational tool for work-related questions pilots might have. Whether for specific or general use, the pilot leaders at Frontier back DART.

“I would highly recommend that MECs transition to the DART platform and bring their committees on board. Empower your subject-matter experts,” said Bole. “The historical nature of DART helps us respond to pilot questions in a more timely manner while helping us function more efficiently as an entire organization.”

“With so many pilots reaching out to us trying to get answers, I have no idea what we would have done if we didn’t have DART,” concluded Pease. “It was the perfect solution to what we needed.”

DART is a robust reporting system that provides one location for ALPA pilots to get quick answers from their master executive council (MEC) leaders and subject-matter experts to questions on any topic related to work. When a pilot submits a question, the DART system automatically routes it to the correct person to answer, and in most cases the pilot can expect a reply within 48 hours.

DART can be accessed from any browser at dart.alpa.org or through the button on the home screen of the ALPA app. However, if your pilot group has its own reporting system, continue to use it as instructed by your MEC.