Continuing the Legacy of 9/11, 20 Years and Beyond

By shortly after 10:00 a.m., three had reached their targets—two crashing into the Twin Towers of the World Trade Center in New York City and one into the Pentagon in Arlington, Va.—while the fourth went down in a Pennsylvania field after passengers and crew attempted to regain control of the airplane.

Approximately 3,000 innocent individuals were killed that day, including eight pilots, 25 crewmembers, and two customer service agents on board those four flights. In the aftermath, aviation plunged into a darkness never seen before.

Yet, ALPA and the industry rose from the horror of those attacks. Within a day, relief flights were bringing supplies and investigators cross country; within three days, regular flights were once again scheduled and nervous, yet defiant, heroes took back the skies. With it all came the shared refrain, “We will never forget.”

Today, as we approach the 20th anniversary of 9/11, those words remain in our collective minds. However, as new generations of pilots join the industry, the task to “never forget” becomes a little more difficult. For younger individuals, the attacks of 9/11 aren’t a personal harrowing experience but rather an event they’ve only read about in school textbooks or in news coverage.

Still, the lessons learned from the terrorist attacks, the bravery shown on that day and the days that followed, and the improvements made to aviation safety and security remain important and worthy of remembrance. Consequently, with each successive year that we put behind us, we must continue to strive to live up to the promise that we will never forget the devastating events of that tragic day.

ALPA honors the memory of those who lost their lives on that fateful day by holding an annual remembrance ceremony in the Association’s 9/11 Remembrance Garden. Capt. Joe DePete has participated in six remembrance ceremonies—four as the Association’s first vice president and two thus far in his current role as president. “It’s deeply important that our country remembers all those who lost their lives and were harmed in the terrorist attacks of 9/11, this year and every year,” said DePete.

He recalled the solemnity of ringing a bell as the name of each fallen crewmember and customer service agent was read out loud during his time as first vice president, and then the honor and emotion of reading the names himself as president.

Capt. Bill Couette, ALPA’s vice president–administration/secretary, was first elected to the position in 2006, a month after the Association’s 9/11 memorial was dedicated. He attended the first ceremony as a line pilot and has participated in each successive ceremony as an ALPA national officer, laying a wreath at the memorial each year along with ALPA’s vice president–finance/treasurer.

“I’m humbled by the fact that I’m allowed to be part of the ceremony,” Couette noted. “Proud and humbled. It’s very somber, very quiet—a time of reflection and remembrance. It’s a fitting way to honor those who lost their lives and reiterate that we will never forget.”

Read 9/11 memories from ALPA pilots and join us for our Remembrance Ceremony, in person or webcast.

Shortly after 9/11, the families and friends of two of the fallen pilots on Flight 93—Capt. Jason Dahl and F/O LeRoy Homer, Jr.—established scholarship funds to help students along their path to the flight deck. These funds continue the legacies of the two pilots and ensure that they’ll never be forgotten.

Founded in 2002, the LeRoy W. Homer Jr. Foundation bestows at least one scholarship a year to help with the costs associated with obtaining a private pilot license; it’s not intended for those pursuing the career through an accredited school. The Captain Jason Dahl Scholarship Fund, which was established the day after 9/11, provides scholarships for qualified students who wish to attend accredited commercial flight training schools in the United States.

Capt. Ryan Wright (Western Global) received a grant from the Homer Foundation in 2005. “The grant allowed me to follow my passion to become a professional aviator,” he said. “With the foundation providing 100 percent funding, I was able to get my private license with little to no burden on my family; it was a win-win.”

After attending Bowling Green State University, Wright joined the Marines, separating from the service branch in 2016 to become a professional pilot. Although Western Global pilots weren’t ALPA members at the time Wright was hired by the airline, he was happy to see them join. “I know LeRoy flew for United and was an ALPA member, so I was proud to become a part of a world-renowned organization.”

Wright works to help lift others up as well. “Any way that I can become more involved, I’m happy to do so,” he acknowledged, “and I try to step up when needed, not when asked, because that’s what leaders do.” One of his goals is to become more involved in local flying organizations as well and help introduce high-school students to flying. “The grant has made such a positive impact on my life, and I want to pay it forward.” 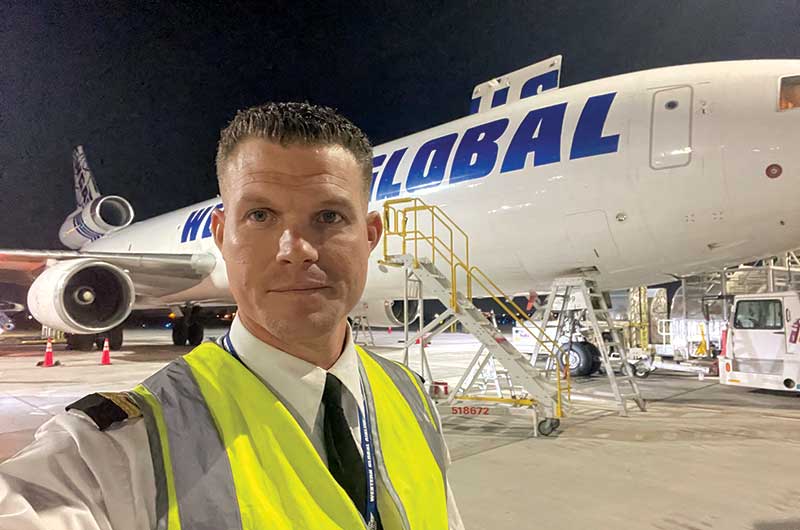 Capt. Ryan Wright (Western Global) takes a selfie before starting his next trip for his carrier.

Capt. Brian Skanron (Air Wisconsin) comes from a flying family; his parents met at United Airlines when his father was a pilot and his mother was a flight attendant. Skanron’s father was flying on 9/11, and he remembers the phone call in which his father reported that he was grounded in New Orleans, La., and didn’t know when he’d be home.

Skanron attended Embry-Riddle Aeronautical University–Daytona Beach (ERAU) after high school but dropped out in 2009 and joined the Wisconsin National Guard. However, shortly after getting married in 2014, he returned to ERAU to pursue his degree.

The Captain Jason Dahl Fund assisted Skanron along his way. “The scholarship helped continue the progression of my commercial pilot license,” he said, noting that it helped fund the cross-country flight necessary for his license. “A weight was lifted off my shoulders, and I had peace of mind knowing that all I had to do was perform the required duties to meet the standard during that flight.”

At Air Wisconsin, Skanron quickly became a captain and then a line check pilot. “Being a line check pilot is such a rewarding position,” he commented. “I now get to help others achieve their dreams of being an airline pilot.”

He continues to pay it forward as well, even as he moves closer to a likely position at United. “Flying for United Airlines has been my lifelong dream for many reasons,” he stated. “The thought of following in my father’s footsteps gives me such a sense of pride. That Jason Dahl was a captain at United only adds to my desire to become a United pilot.”

F/O Colin Gifford (Frontier) earned a grant from the Dahl Fund for his sophomore year at Purdue University before graduating in 2019. He joined Frontier in June 2019 and last year was accepted to the Florida Air National Guard and is awaiting training dates.

Gifford, like many recent recipients and likely future recipients, has no real memory of 9/11 as he was just four and a half years old. He recalled reading about it in books, visiting New York City in middle school, and more recently visiting the 9/11 Memorial. However, he remains mindful of Dahl’s legacy and his part in continuing it.

“His heart for service continues to make an impact to this day, and that’s why I’m inspired to further his legacy in honor of him and all those who lost their lives on 9/11,” Gifford explained. “I feel a connection to Capt. Dahl as we both grew up in San Jose, Calif., and I share his love of aviation and wanting to instill that love of flying in others.”

That legacy also includes giving back and inspiring the next generation. “Without the help of others, I wouldn’t be where I am today,” Gifford observed. “So whether it’s inviting a curious kid onto the flight deck or mentoring private pilots, I’ve made it a goal to inspire and mentor the next generation of aviators and give back as best I can.”

Only one person thus far has received grants from both organizations: F/O Sarah Cooke (Spirit), a graduate of San Jose State University and a U.S. Air Force veteran. The grant she received from the Homer Foundation allowed her to earn her private pilot’s license in 2002, while the grant from the Dahl Fund partially funded her instrument rating while in college.

“I knew I wanted to be pilot when I was very young,” said Cooke. “However, with no mentors, resources, or guidance, I didn’t know where to start. These scholarships truly had a domino effect on my life and my career as a pilot. Thanks to these pilots’ legacies, with each step of my continued success in life, I can exemplify the endless possibilities to other aspiring aviators.”

Cooke was hired at Mesa Airlines in 2008 before the Great Recession led to a five-year furlough and her stint in the Air Force. She left active duty in 2019 and was hired at Spirit a few months later. Cooke continues to mentor and give back through Women in Aviation, Girl Scouts, and ongoing e-mail relationships with the excited children she’s brought onto the flight deck—all in appreciation for what the families of the fallen have done for her.

“Aviation has changed my life,” she shared. “I can truly say that these organizations not only aided me with choosing which direction I wanted to travel in life, but they also built the runways.” 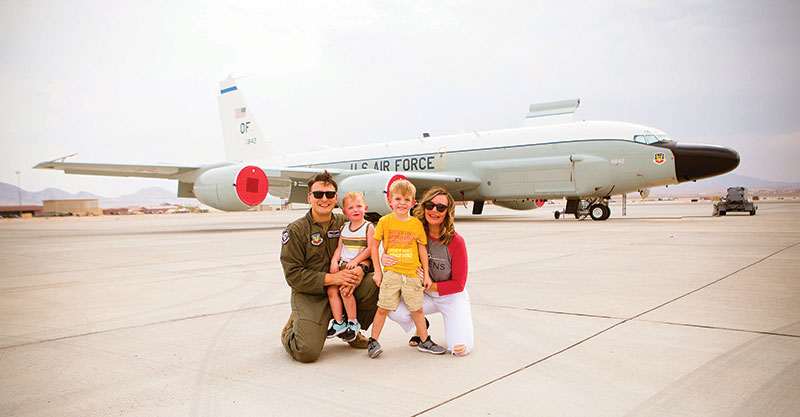 You can help keep the memory and legacy of Dahl and Homer alive by making a one-time or recurring donation by visiting dahlfund.org or leroywhomerjr.org. The families and friends of United Flight 175’s pilots have also established ongoing charitable foundations, although not in the area of flight training. West Chester University awards an athletic scholarship in honor of F/O Michael Horrocks, while Capt. Victor Saracini is remembered in the 9/11 Memorial Garden of Reflection in Yardley, Pa. United Airlines pilots can make regular and automatic charitable contributions to any or all of the sponsored memorial funds via justabuck.info.

ALPA was founded on the tenet of “Schedule with Safety.” After 9/11, the Association worked tirelessly to shore up the safety and security holes in the airline industry exposed by the 9/11 attacks and to ensure that air transportation remained the safest form of travel, providing yet another ongoing legacy of and tribute to those lost.

Among the improvements that rose out of 9/11:

“For ALPA, the legacy of those we lost is a living legacy, as our pilots have worked and continue to work to strengthen the industry in their memory through efforts such as mandating secondary flight deck barriers to improve security and promoting one level of safety and security for all-cargo operations,” said DePete. But more work remains, including

Take ALPA’s Calls to Action on these important priorities.

“We will never forget that dark day in September that forever changed the airline industry,” Depete acknowledged. “ALPA remains unwaveringly committed to ensuring that the legacy of all who lost their lives or were harmed on Sept. 11, 2001, is that of a safer and more secure U.S. air transportation system.”

All current and retired ALPA members are welcome and encouraged to attend. Please wear your uniform and join ALPA’s national officers, Executive Council, and staff for the ceremony and a breakfast to follow. Visit alpa.org/911remembrance to RSVP and to revisit past ceremonies. The event will also be webcast live for those who are unable to join in person.