By Sharon Bhagwandin, Editor in Chief


Editor’s note: Exposing the dangers of reduced-crew operations has been and will continue to be an ALPA priority. In this nine-part series, Air Line Pilot will educate, inform, and advocate support for maintaining the most vital aircraft safety feature: two experienced, well-trained, and well-rested professional pilots on the flight deck. Catch up with Part 1, Part 2, Part 3, Part 4, Part 5, Part 6, and Part 7.

“The level of airline safety that the traveling public has come to expect can’t be maintained in the future world where new-entrant operations are expected to be a frequent occurrence across our great nation without a strategy to get us there. ALPA stands by as a committed, willing partner as we continue to chart a path on these very important topics into the future.”—Capt. Joe DePete, ALPA President


During this year’s Air Safety Forum, ALPA pilots continued their staunch advocacy for the safety-first approach that’s been the foundation of the Association’s work for more than 90 years. In two multi-industry stakeholder panels, “UAS: Challenges and a Way Forward” and “Space Suites, Drone Zones: Integration Leaders Chart the Shared Path Forward,” ALPA members kept a spotlight on maintaining, and building upon, current safety standards: airworthiness certification for aircraft and safety training for the pilot-in-command.

Both expert panel discussions covered an array of challenges faced when integrating new entrants into the airspace, but it was ALPA that advocated for rigorous pilot training, underscoring that pilot training and qualifications are critical to safety and key to why commercial aviation is the safest mode of transportation in the world. History shows that having at least two fully qualified, highly trained, and well-rested pilots on the flight deck is the airline industry’s strongest safety asset. And the push for reducing the flight crew—possibly down to even a single pilot or remote pilot—to cut operational costs isn’t prioritizing safety and remains unacceptable.

Included in the discussions on current and emerging technologies, ALPA pilots encouraged continued, and increased, cross-collaboration and cooperation among all operators in the national airspace system. With approximately 300,000 certificated remote pilots and 800,000 registered drones today in the United States, ALPA experts were quick to reinforce the critical nature of safety management systems, data collection, and the importance of sharing existing proprietary data to maintain the safety of the national airspace.

Among the ALPA pilots on both industrywide expert panels were

As one industry panelist noted, emerging technologies will push current aircraft operations “from 50,000 to millions,” reinforcing the critical aspect that as the national airspace expands to welcome new entrants, we must be vigilant not to overload the current air traffic system that’s so integral to upholding aviation safety.

Currently, the FAA’s certification process for new entrants is rigorous, multilayered, and set to an intentionally measured pace with approvals and growth based on collected safety data through testing. And while a new category of certification, “associated elements,” has been added, the FAA is constantly evolving as new communication and tracking systems are studied and monitored.

Adding to the new entrants of the national airspace is a fever-pitch desire for access to airspace for commercial space operations. Today, space launches have become almost commonplace, and as the pace accelerates, safety must be paramount when increasing operators in the shared airspace. As noted by several ALPA pilots, the path to get there includes the continuation of open dialogue among all users of the national airspace system, the sharing of safety data, and cross-industry and advisory agency committee coordination. In addition, discussions about federal agency cooperation, contingency plans, and defined processes for investigating accidents and incidents must be in place to ensure a safe operating environment.

Throughout the Air Safety Forum, ALPA pilots were able to share collected, firsthand information and research that the Association’s President’s Committee on Reduced Crew Operations has been diligently compiling, including from notable global air shows where manufactures and their sales teams boast the benefits and conveniences of emerging technologies—all of which revolve around taking airline pilots out of the flight deck. In some cases, the reduction of crew means shifting the pilot-in-command to a remote-area supervisor who’s responsible for monitoring up to hundreds of uncrewed aircraft.

ALPA’s experts made it clear, however, that relaxing proven safety standards for the world’s safest mode of transportation would put the lives of people in the aircraft—and on the ground—at great risk. As new entrants emerge in the national airspace, reducing safety is not acceptable.

During the private days of the Air Safety Forum, Capt. Russ Sklenka, ALPA’s executive administrator, who leads the President’s Committee on Reduced Crew Operations (PCRCO); PCRCO members; and supporting ALPA staff summarized the committee’s regulatory and legislative activities, including past successes and future challenges on both the domestic and international front. The group also reported on current and future advocacy and engagement strategies as well as outlining the PCRCO’s agenda for 2023. 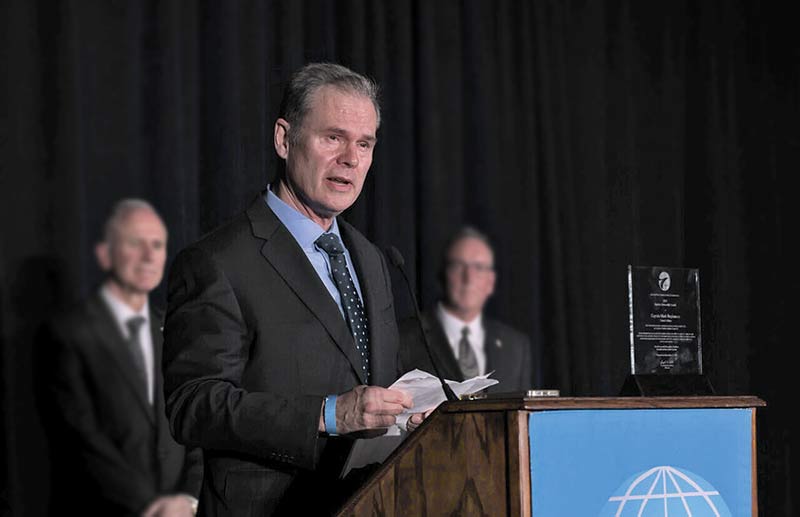 Shortly after takeoff, as the aircraft climbed through 10,000 feet, air traffic control called out moderate turbulence at 13,000 feet. The flight crew heard a small pop on the right side of the aircraft followed by a tremendous shudder throughout the aircraft. Seconds later, the crew received an ENG fail light and then a subsequent engine fire warning on the No. 2.

Stephenson immediately disconnected the autopilot and told De Vore to run the engine severe-damage checklist. At this point, the crew recognized that the aircraft was heading straight toward the mountains and became concerned about impending terrain.

Stephenson declared an emergency over the radio and started a left turn. He called MAYDAY, MAYDAY, and air traffic control responded immediately, offering support and whatever help it could provide to get the aircraft back to Denver International.

ATC offered Runway 7 at the airport, the quickest way to get back on the ground. However, after discussion, Stephenson and De Vore chose to land on Runway 26, ensuring the flight was stabilized and the crew had the time to accomplish all required checklists. After landing safely, the aircraft was met by aircraft rescue and firefighting personnel.