Capt. Cyndhi Berwyn (FedEx Express) stands on a mobile staircase in front of the Orbis FlyingEye Hospital on display at this year’s EAA AirVenture Oshkosh.

Capt. Cyndhi Berwyn (FedEx Express) routinely transports a wide range of deliverables as a B-777 all-cargo pilot. But as an Orbis Flying Eye Hospital pilot volunteer, she conveys something truly extraordinary—the gift of sight.

Preventable and correctable vision problems can keep those affected from securing essential jobs and leading full lives. The U.S. Centers for Disease Control and Prevention estimates that globally 253 million people are blind or face significant optical challenges, and the vast majority can be helped with treatment.

By reconfiguring a McDonnell Douglas MD-10-30 to serve as a state-of-the-art operating and teaching facility and flying it with a payload of skilled medical professionals and technicians directly to international communities in need, Orbis is able to ensure access to quality eye care around the world.

“When children are able to see their parents for the very first time and their faces light up, you can’t imagine how gratifying it is to be a part of this special team. They look at you with so much love and appreciation,” said Berwyn, who’s flown approximately 20 missions since joining the charitable organization in 2012. In addition, she’s traveled to locales including Bangladesh, Chile, Ethiopia, Jamaica, Myanmar, Peru, the United Arab Emirates, and Vietnam, as well as sites across the United States for promotional static displays. Most recently, she acted as a docent for the aircraft at the 2021 EAA AirVenture in Oshkosh, Wisc.

Orbis missions are planned and coordinated well in advance, and flights are staffed by volunteer FedEx Express pilots, largely because Orbis can’t provide initial training on the aircraft. All Orbis pilots must be current and qualified on the MD-10 to participate.

Berwyn acknowledged, “We do a lot of prep work since we aren’t dispatched like an airline. We must be ready to handle any situation we might face.” After extensive preparation, the Flying Eye Hospital flies to the selected location where it spends two to four weeks. The pilots who fly the inbound trip typically aid the medical team for a day or two before deadheading home.

“I like to assist with the programs and screenings,” said Berwyn, adding that on a trip to Ethiopia she helped people transition between rooms as part of the screening process prior to surgery. At the end of the aircraft’s stay, another crew deadheads to the location to fly the MD-10 to a follow-on destination in preparation for its next visit.

Berwyn noted that despite being a B-777 captain, she has a long history with the Orbis aircraft type. “I have 35 years of experience flying the MD-10, or some derivative, which adds to my comfort level with it,” she said. That familiarity began at the onset of her flying career.

In 1978, when Berwyn was a senior at the University of Hawaii, the U.S. Air Force announced it would select women through its ROTC program to fly as pilots. She was one of the initial candidates picked and, after a stint as a first assignment instructor pilot, flew the KC-10 Extender, a military version of the MD-10. 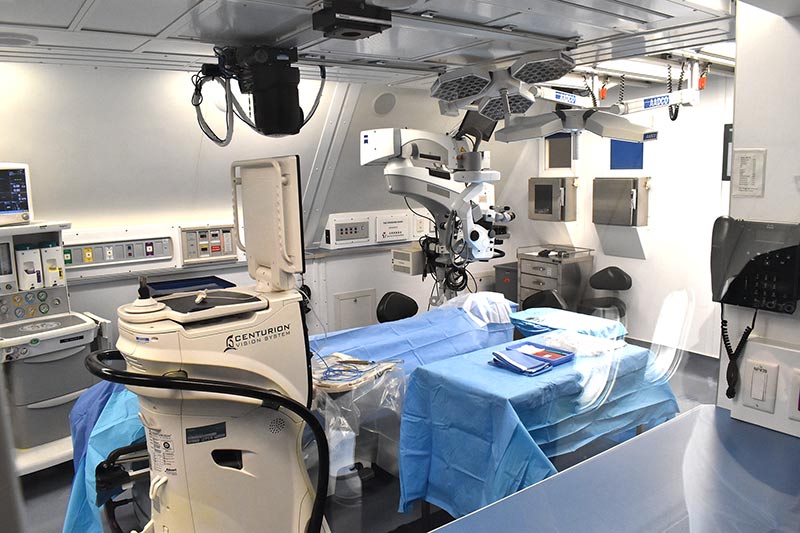 A portion of the operating area in the reconfigured MD-10. The aircraft features a Mobile Simulation Center that uses virtual reality, cutting-edge prosthetics, and highly sophisticated life-like mannequins for teaching purposes.

Continuing to serve in the Air Force Reserve, Berwyn went to work for FedEx Express in 1986, where she learned about the Flying Eye Hospital from Orbis chief pilot Capt. Gary Dyson (see “Our Stories” in the June–July 2018 issue). Since Berwyn was an instructor, check pilot, and designee on the MD-10 at the time, Dyson asked if she’d consider volunteering. “I was really lucky to have been offered this opportunity,” she recalled.

Berwyn’s family has also been personally affected by vision impairment—in 2017 her granddaughter was born with an optical disorder. “It took us a while to determine that she suffers from a rare syndrome. Having a family member with a severe visual impairment gives me some added empathy and a better understanding of the value Orbis provides to the many people whose lives it has been able to so positively change,” she acknowledged.

Learn more about the Orbis Flying Eye Hospital
or make a donation.