The Dangers of Single-Pilot Operations


At this year’s Air Safety Forum, ALPA released its white paper titled “The Dangers of Single-Pilot Operations.” The document affirms the Association’s position regarding maintaining the role of—and recognizing the importance of—the most vital safety feature in transport-category aircraft now and for the foreseeable future: at least two experienced, well-trained, and well-rested pilots in the cockpit. The recognition of the flight crew of United Flight 1175 further reinforces ALPA’s safety position. The following is an overview of ALPA’s white paper. Read the paper and participate in ALPA’s Call to Action. 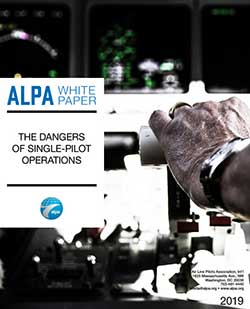 Current aircraft automation technology can reduce a flight crew’s shared workload, but it’s only a tool to assist flightcrew members, who remain responsible for the safe outcome of every flight. However, a growing number of interested entities—including technology companies, airlines, and the military—are seeking to cut operating costs while governmental research organizations are looking to chart new horizons by advocating for reducing the current number of flightcrew members in large aircraft to just a single pilot.

Yet automation, communications, and sensor technologies are decades away from being able to provide the same level of safety as a second pilot in the cockpit or even as a remotely positioned second pilot. The current body of evidence and experience, including more than a decade of study by NASA and the FAA, shows that the safety risks and challenges associated with single-pilot operations far outweigh its potential benefits.

The power of two pilots

Single-pilot operations would use only the pilot flying, who must assume some share of the monitoring pilot’s functions, while other tasks are assigned to computers and ground-based pilots. The result, inevitably, is reduced levels of safety and significantly increased workloads for a single pilot flying an airliner.

Additionally, excessive reliance on automated systems can negatively impact that single pilot’s performance, as autonomous systems can lead to complacency in the cockpit. As pilots become less vigilant in their monitoring, their situational awareness can degrade and their pilot skills erode from disuse. Studies have shown that when unexpected events requiring human intervention occur, pilots who’ve been using autopilot for an extended period or who don’t routinely maintain manual flying skills can have difficulty transitioning back to active mode, which becomes critical when seconds count.

Two pilots seated side by side in the cockpit can closely coordinate their actions via constant communications, including nonverbal cues such as head nods and other gestures that indicate a message has been heard or a task is being performed. The second pilot also plays a vital role in monitoring the other, performing critical safety tasks such as checklists, both normal and emergency, and can quickly take control if the pilot flying becomes incapacitated for health reasons during a flight.

A pilot’s ability to adapt to a dynamic environment, including addressing changes in circumstances such as directions from air traffic control, weather, equipment malfunctions, airport congestion, and flight diversions, is critical. According to FAA data, only one out of every 10 flights conforms to the original flight plan entered into an aircraft’s flight management system. And studies show a negative effect on flight path performance and a clear inverse relationship between pilot workload and safety, particularly during adverse conditions. Single-pilot operations and reduced-crew operations would compromise that layer of safety, posing an unacceptable risk.

Various documented incidents have occurred in which two or more pilots were needed to avert disaster following major in-flight equipment malfunctions. These include the 2009 incident in which a US Airways crew ditched into the Hudson River after a bird strike caused a dual-engine failure shortly after takeoff, and the 2018 incident in which a Southwest Airlines flight suffered a catastrophic engine failure and debris shattered a passenger window in the cabin. ALPA pilots who’ve received the Association’s Superior Airmanship Award are another testament to the need for multiple pilots in the cockpit. 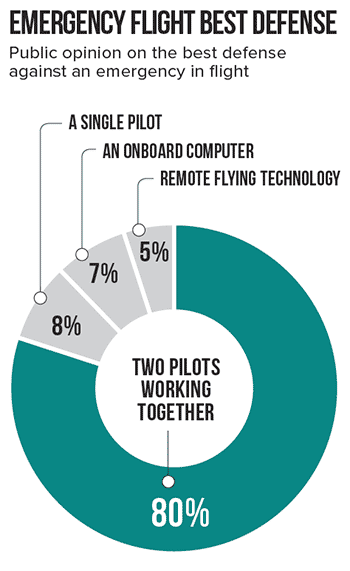 While automation and other technologies have advanced considerably over the years, they haven’t reached the point of enabling single-pilot operations without compromising safety. To truly replace the second pilot in the cockpit, machines will need to replicate the sensing, assessing, reacting, adapting, and interacting capabilities of a human in a complex and dynamic environment. Current automation technology is capable of handling specific, limited tasks, but even these systems are prone to errors that, if undetected, can be compounded over time. Current technology is also incapable of remotely detecting subtle signs of health complications in a human pilot that could indicate impending incapacitation.

In addition, the enhanced air-to-ground communications and automation capabilities necessary to implement reduced-crew or single-pilot operations could leave aircraft vulnerable to new forms of tampering or attack. Hackers might, for example, jam signals used to remotely operate an aircraft, or even commandeer a flight via cyberattack. Signal encryption is the best defense against such attacks; however, encryption introduces signal delays, often lasting for seconds, which could make it difficult to operate an aircraft remotely in an emergency.

U.S. federal aviation regulations governing commercial aviation are clear: At least two pilots must be present in the cockpit of large passenger and cargo transport aircraft. They also require the presence of additional flightcrew members to maintain pilot alertness on long-haul flights and to achieve the necessary functionality and safety required of aircraft designs to obtain certification for operation. FAA regulations reinforce the guarantee of safety via human pilots by prohibiting the use of unmanned aircraft systems to transport passengers or cargo for compensation.

Polling data indicates that the public disapproves of reduced-crew or single-pilot operations. In one poll conducted by ALPA, 80 percent of respondents agreed that at least two pilots working together in the cockpit are best equipped to handle flight emergencies, while 96 percent said research dollars should be directed at projects other than those aimed at eliminating pilots from the cockpit.

Reducing the size of cockpit crews could potentially save airlines and air transport operators money on salaries, benefits, and other expenses, but some of these savings would be offset by expenses associated with reduced-crew and single-pilot operations. These costs include outfitting or retrofitting aircraft with the necessary automation, sensor, and communications systems; ground infrastructure; salaries and benefits for remote pilots who would be needed to support single-pilot flights; and certification.

On the national stage, reduced-crew and single-pilot operations rank low on the priority list for U.S. federal investment in aviation research and technology. More pressing investment priorities include rebuilding the U.S. air traffic management system. The FAA, with NASA’s help, is currently pursuing this effort through NextGen. The $20 billion-plus program is required to address continuing growth in commercial aviation and the entry of new vehicles into the national airspace system. Given the scope of this endeavor, the FAA doesn’t have resources to spare for a nonessential and complicated undertaking such as introducing single-pilot operations.

Additionally, NASA’s Aeronautics Research Mission Directorate (ARMD) is working on investment alternatives that carry greater societal and economic benefits than single-pilot operations. ARMD is investigating several different technologies that have the potential to make aircraft faster and more fuel efficient while reducing their environmental impact. These technologies include supersonic passenger aircraft without the sonic boom that makes travel over land problematic, advanced battery cells that could enable electric propulsion, and new engine and wing-body aircraft designs that could dramatically reduce fuel consumption.

The paramount priority in commercial aviation is and always will be safety. Any measures or changes designed to improve the efficiency and economy of the current system must be accomplished without compromising safety. And the best guarantor of safety is having at least two fully qualified pilots in the cockpit of passenger and cargo transport-category aircraft. Investing in reduced-crew operations would displace other potential investments that would benefit all aviation stakeholders—including airlines and air transport companies—and compromise safety. Even in today’s modern technological age, there is no safe substitute for having at least two experienced, well-trained, and well-rested pilots on the flight deck of every passenger and cargo aircraft.