“Consider where you all are now on the timeline of our Association from the founding in 1931 to the present and the progress we’ve made,” said Capt. Joe DePete, ALPA’s president, who hosted the event. “Much of that stems from the contributions of the people in this room and the volunteer service of those we honor tonight,” he remarked.

The awards banquet is the culmination of the Association’s annual Air Safety Forum, the airline industry’s preeminent safety, security, and jumpseat gathering that spotlights issues of importance to airline pilots.

United pilots Capt. Christopher Behnam, Capt. Paul Ayers, and F/O Ed Gagarin were recognized with ALPA’s Superior Airmanship Award for their skillful efforts and resourcefulness in addressing a significant engine failure over the Pacific Ocean that resulted in the loss of the engine cowling.

On Feb. 13, 2018, United Airlines Flight 1175 departed San Francisco International Airport bound for Honolulu, Hawaii, with 370 passengers on board. Less than an hour from their destination, the airplane’s right engine failed. Behnam and then first officer Ayers sprang into action, with Behnam taking the controls as the aircraft pulled to the right. Executing textbook crew resource management, the crew worked flawlessly together to maintain control of the aircraft amidst deafening noise and vibration and with no autothrottle or autopilot. Riding in the cockpit jumpseat, Gagarin assisted Ayers in performing the checklist—confirming, reconfirming, and verifying each step in shutting down and securing the right engine.

Because the flight crew became concerned about the structural integrity of the aircraft, Gagarin left the cockpit to assess the damage and saw firsthand what had occurred. The flight crew made changes in the aircraft pitch and throttle on the left working engine to keep a constant, shallow descent. Continuing to Honolulu International, the crew requested that aircraft rescue and firefighting equipment be ready and called on the cabin crew to prepare for an emergency landing and a possible evacuation.

To maintain flight control, Behnam cautiously delayed the extension of the flaps and landing gear, resulting in a higher-than-normal airspeed on approach. Breaking out of the clouds at 2,500 feet, the two first officers helped Behnam line up for a visual approach into Honolulu International, and Flight 1175 safely touched down.

Because of the flightcrew members’ quick thinking, expedient identification of the problem, professionalism, and resourceful efforts in formulating a response, they greatly reduced the chances of further flight complications.

Joining DePete in presenting the award was Capt. Todd Insler (United), his pilot group’s Master Executive Council chair, who described the events of the flight and commented, “The entire crew maintained true professionalism in handling this crisis. They did a superior job in keeping ATC, flight attendants, and passengers informed about the event. Their actions were nothing short of exemplary.”

Accepting the award, Behnam said, “To be recognized by your peers is an extraordinary blessing, just as I was blessed to have two fine aviators in the cockpit with me on that flight.”

“Capt. Frank’s accomplishments in the field of aviation jumpseat are a testament to his dedication to his fellow crewmembers and to advancing the piloting profession,” said DePete. “Because of the many contributions of pilot volunteers like Capt. Frank, ALPA has been at the forefront of enacting positive change within many key aviation security programs.”

One of the founding members of ALPA’s Jumpseat Council, Frank has been heavily involved in enhancing flight deck security, including several policies that are widely used throughout the industry today. As chair of Air Wisconsin’s Jumpseat Committee, he worked to ensure that pilots had better access to the jumpseat while commuting. These efforts were instrumental in fostering a renewed culture among ALPA pilots that jumpseaters provide an extra level of safety and security during flight.

Accepting his award, Frank noted, “None of us in this room do this for the honors, for our egos, or for answering our phone at 10 p.m.… I do this for the pilot who’s stuck in Europe or some small town in America and can’t get home because the jumpseat is taken…. [T]aking five minutes out of my life to get someone home for a graduation, a wedding, or other events makes all the difference.” 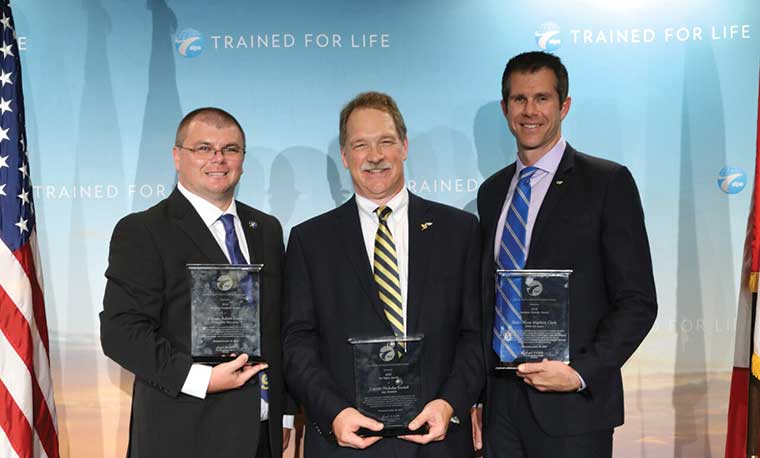 Serving on ALPA’s Aviation Security Council, Clark has been involved in raising awareness of the concerns created by disruptive passengers and current efforts to help mitigate the risks. As a result of his extensive experience and efforts, he’s a trusted subject-matter expert in aviation security, including the Federal Flight Deck Officer program.

“First Officer Clark’s leadership in aviation security is felt throughout the industry today,” DePete observed. “As a powerful advocate for effective and efficient security initiatives, Matt has played a key role in safeguarding the entire airline industry.”

Accepting the award, Clark acknowledged, “I'm truly grateful for the opportunity and experience that being an ALPA volunteer has given me, and the chance to learn more and be a part of such an important effort. And, even more importantly, getting to work with so many absolutely fantastic and amazing people.”

Safer skies for all

Over the course of his more than 30 years as an ALPA pilot, Seemel has become known around the world as a leading and respected advocate for the airline piloting profession. His work to advance safety reporting programs and just culture has resulted in a team approach between pilots and airline management and has helped enhance aviation safety.

“Capt. Seemel’s leadership in aviation safety will have a lasting effect within our industry for decades to come,” said DePete. “His dedication and commitment to enhancing safety have contributed to creating a proactive safety culture that cuts across all airlines and stakeholders with unprecedented levels of collaboration.”

As the Air Safety coordinator for ALPA Canada, Seemel leads an extensive group of pilot volunteers and, working in partnership with airline management, represents his fellow pilots to ensure the highest standards of aviation safety. He has also assisted in instructing fellow ALPA pilots on the importance and implementation of safety management systems, the nonpunitive safety reporting process that has helped make North American aviation the safest in the world.

Seemel continues to share his world-leading expertise on safety management systems as a member of the International Civil Aviation Organization’s Safety Management Panel, which is currently reviewing and amending international standards.

Upon accepting the award, Seemel said, “It has been quite a journey to this point, and as a part of that you meet people who, to me, represent a village. The good friends and colleagues in my village all own a piece of this award, and I’m honored to know and work with you all.”

“Capt. Sultan has played a crucial role in ensuring that the airline pilot perspective is incorporated into ongoing projects at PHL. Through his ongoing relationship with local airport leaders and his participation on the Runway Safety Action Team, Sultan has successfully brought pilot safety and operational concerns to the forefront of operations,” said DePete.

In addition to his work at PHL, Sultan is ALPA’s Air Safety Organization chief U.S. regional airport safety coordinator and is responsible for keeping track of all U.S. airports in terms of operational safety. In this role, Sultan was the point of contact for Air Wisconsin at Columbia Regional Airport (COU) in Columbia, Mo. Pilots at COU noticed issues with the new runway and airport configuration. After consulting with Sultan, COU officials decided the best course of action was to close the airport for several days to make emergency repairs.


Airport of the Year

At the Air Safety Organization’s general session of the Air Safety Forum on July 17, Capt. Joe DePete, ALPA’s president, named Boise Airport (BOI) in Boise, Idaho, as the 2018 Airport of the Year for its collaborative approach to keeping aviation safety the top priority by regularly seeking input from pilots and other industry stakeholders.

“The Boise Airport team clearly understands the importance of staying ahead of the safety curve at all times,” DePete remarked. “The airport proactively solicits ALPA pilots’ expertise and feedback on numerous issues, which ultimately helps mitigate potential operational issues down the road.”

The Boise metropolitan area is in the midst of swift growth, and airport officials are anticipating BOI growing to a midsize airport over the next few years. Airport officials actively requested ALPA to be a party to the master plan update for growth at the airport. This is just one example of how Boise Airport officials are collaborating with ALPA and aviation stakeholders to keep safety at the forefront.

“The Boise Airport is honored to receive the 2018 Airport of the Year Award from ALPA,” said Greg Myers, the airport’s operations manager. “We believe it’s integral to the airport’s success to have collaborative discussions with all our stakeholders. We value the thoughtful input from ALPA and look forward to maintaining our strong relationship so that Boise Airport can continue its outstanding safety performance.”

Capt. Robert Hawk (Delta), for his invaluable contributions as the manager of the Operational Quality Assurance program for his pilot group’s Master Executive Council.

Capt. Scott Schwartz (FedEx Express), for his tireless work as director of ALPA’s Dangerous Goods Program, promoting a safer environment for pilots around the globe. 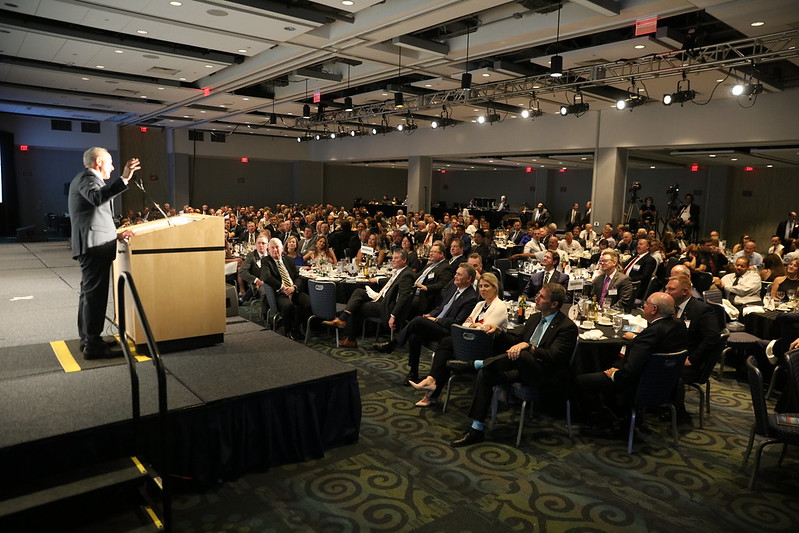