On the morning of Saturday, September 11, dozens of pilots, family, staff, and members of the community gathered at the 9/11 Remembrance Garden outside of the Association’s offices in McLean, Va., to commemorate the two decades since the 9/11 terrorist attacks.

“Today, we honor each of the nearly 3,000 individuals who fell on the morning of Sept. 11, 2001,” said Capt. Joe DePete, ALPA’s president. “We also remember those who rose with almost incomprehensible bravery to protect others who they did not know. In the days following the attacks, the piercing sense of vulnerability and loss swiftly transformed into an abiding spirit of compassion and cooperation. Out of horrific tragedy, stories emerged of extraordinary sacrifice and selfless acts. Long-established social and political boundaries gave way under the power of unity.”

In his remarks, DePete observed that the legacy of 9/11 “is reflected in literally everything we do—as we fly passengers and cargo safely to their destination and advance aviation safety, security, pilot assistance, and jumpseat access.” He also highlighted ALPA’s efforts to grow the pilot population, noting, “We are also building a legacy of connection with future generations. ALPA’s contribution to the four nonprofit organizations created in the names of the pilots we lost in the attacks is one way we are helping to support young adults who dream of becoming an airline pilot.”

Speaking to those attending the event, Capt. Todd Insler (United), his pilot group’s Master Executive Council chair, remarked, “We will always remember the courageous first responders who selflessly ran into burning buildings to save lives and the scores of rescuers who combed through the rubble in the aftermath to pull victims up out of the darkness. We also remember the airline pilots, crews, and passengers who were some of the first to fight back, displaying immeasurable courage in the face of evil.”

Commenting on the resulting unity in the tragedy’s wake, F/O Tim Perry, ALPA Canada president, noted, “Our two nations, along with others around the world, embraced one another with the conviction that we would not move to the darkness and together we would overcome the fundamental challenge to our very way of life. You know what else? It brought an even deeper bond among those who share this noble profession over the past two decades. Our courage, strength, determination, and solidarity have grown even stronger.”

In memory of those lost 20 years ago, Capt. Bill Couette, ALPA’s vice president–administration/secretary, and Capt. Joseph Genovese, ALPA’s vice president–finance/treasurer, placed a commemorative wreath on the split-rock memorial. DePete then read the names of each of the pilots, flight attendants, and other airline employees who on Sept. 11, 2001, were on board United Airlines Flights 93 and 175 and American Airlines Flights 11 and 77 as Capt. Bob Fox, ALPA’s first vice president, tolled a bell following each name. In addition, Capt. Richard Morley (United, Ret.) expressed the collective sense of connection through music, as he played “Amazing Grace” on bagpipes.

The Association’s Remembrance Garden contains a 10-ton center stone from a quarry in western Pennsylvania. It is split to represent the fractures that the 9/11 attacks created in families, friendships, and communities.

The two sentry stones at the entrance were taken from a quarry just a few miles from the field in Shanksville, Pa., where United Airlines Flight 93 went down.

The garden also includes a portion of the outer wall of the Pentagon and two sections of steel I-beams from the World Trade Center site.

Dedicated on Sept. 11, 2006, the fifth anniversary of the attacks, ALPA’s Remembrance Garden invites individuals to not only reflect on those who were lost on that fateful day, but also to take comfort in our connections with others.

Events were held across the country to honor those who lost their lives during the terrorist attacks on Sept. 11, 2001. 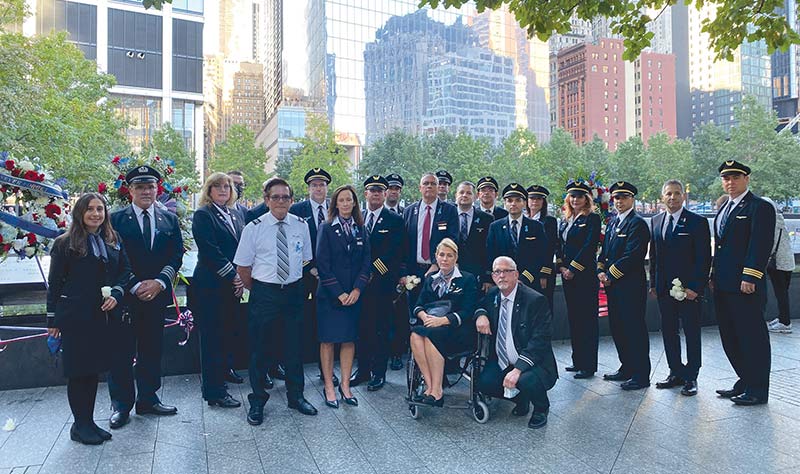 New York A group of pilots and others unite in New York on September 11 to commemorate two decades since the terrorist attacks. 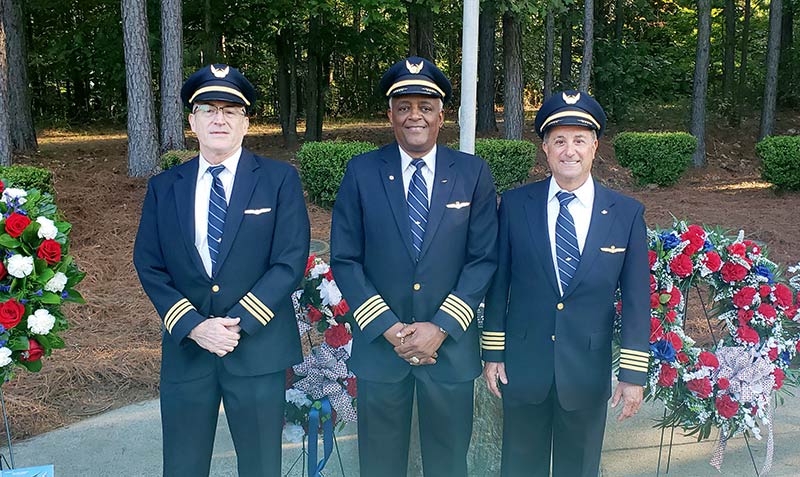 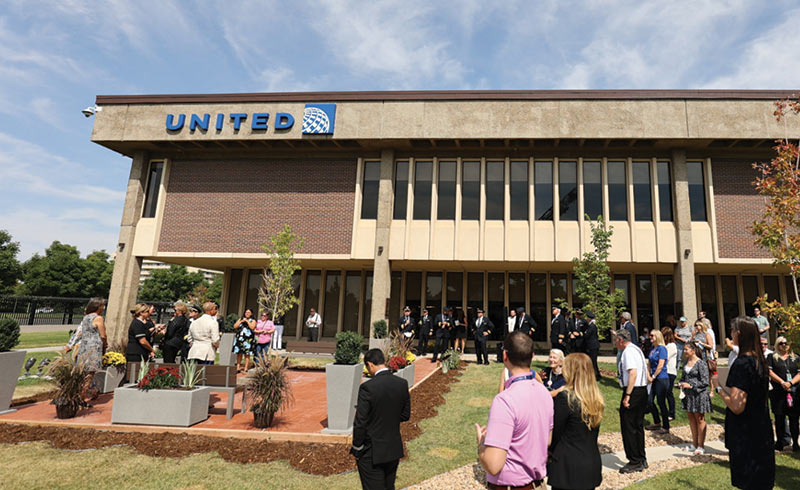 Colorado Attendees assemble at the United Airlines Flight Training Center in Denver, Colo., on the 20th anniversary of 9/11. 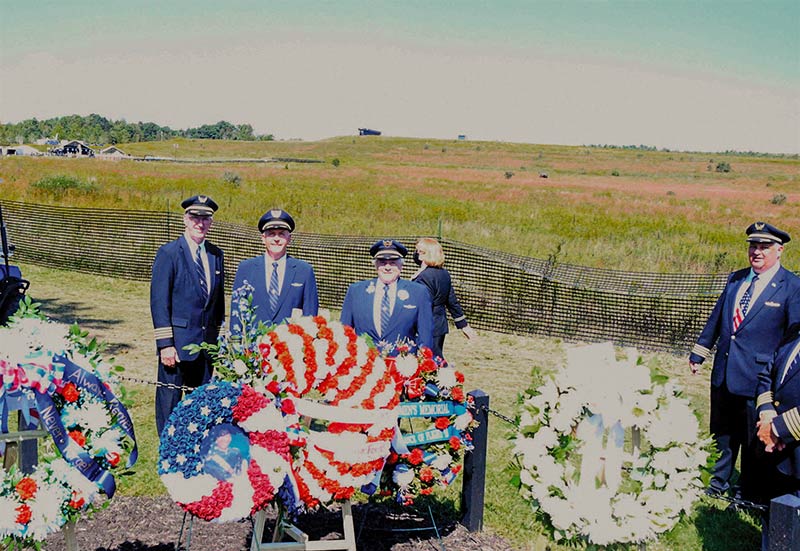 Pennsylvania Pilots gather around a display of wreaths in Shanksville, Pa., to honor and pay tribute to the victims of 9/11. 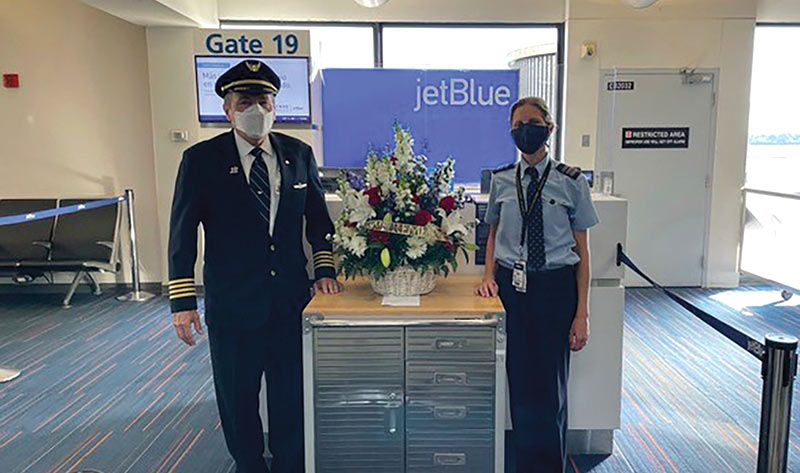 Massachusetts Two JetBlue employees stand at the entrance of Gate 19 at Boston Logan International Airport in remembrance of those who lost their lives on Sept. 11, 2001. 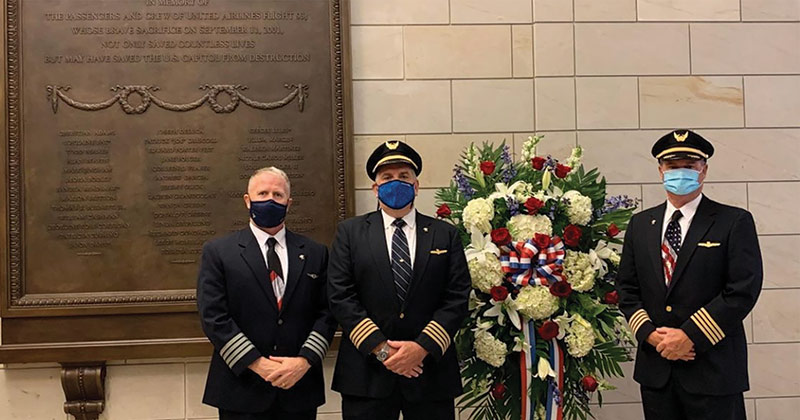 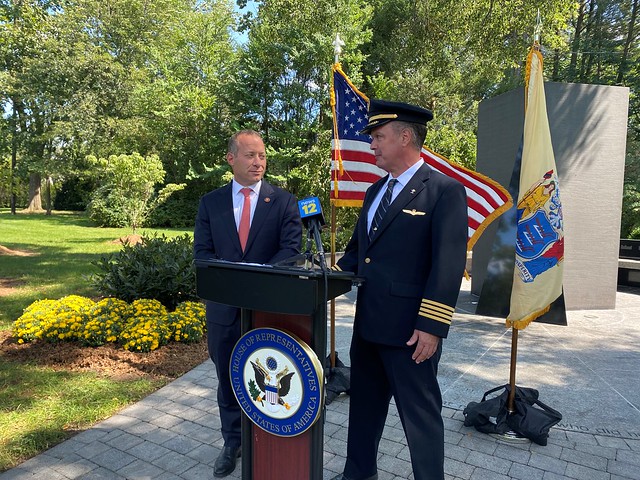