Alaska pilots and other supporters line up to demand a fair contract at Seattle-Tacoma International Airport.

On April 1, Alaska Airlines pilots conducted a truly spectacular unity event in support of what has become a three-year campaign to bargain for a market-based collective bargaining agreement. In an extraordinary display of tenacity and perseverance, more than 1,500 pilots from Alaska, a dozen other ALPA pilot groups and non-ALPA pilot groups, plus other Alaska employees, engaged in a systemwide informational picket.

What made this enormous demonstration even more remarkable was the live broadcast, conducted via social media from the Alaska Airlines pilot bases at major airports in Los Angeles and San Francisco, Calif.; Portland, Ore.; Seattle, Wash.; and Anchorage, Alaska. In addition, local executive council representatives at each of the locations briefed the audience on the pilots’ concerns.

Those watching the demonstration online saw pilots standing shoulder to shoulder, carrying picket signs expressing sentiments such as “Do the Right Thing—Value Your Pilots” and “Break the Stall—Contract Now.”

“What you see behind me here are many of my fellow pilots who—on a day off—made a point to come out and join an informational picket,” said Capt. David Campbell (Alaska), his pilot group’s Strategic Communications chair, during the opening moments of the broadcast. “Alaska Airlines pilots have been in contract negotiations with management for nearly three years, and, in all of that time, management hasn’t made meaningful progress to address the concerns of the pilots.”

The sheer magnitude of this event was enough to draw numerous television news crews and newspaper reporters, who flocked to designated pilot spokespersons at each of the locations. And at each site, the major point emphasized was the same—Alaska pilots need a new contract now!

Earlier in the day, an ALPA public statement highlighted a quote from Capt. Will McQuillen (Alaska), his pilot group’s Master Executive Council (MEC) chair, providing some context for the event. McQuillen asserted, “Alaska Airlines pilots have been crucial in the overwhelming success of this airline and have earned a new contract that recognizes our contributions. The contract improvements we seek are reasonable, and affordable, and will allow our airline to remain successful and competitive.”

On the same day of the picketing, the airline announced that it had canceled more than 100 flights for staffing reasons in an obvious attempt to cause public antagonism toward the pilots. The Alaska MEC pivoted quickly, releasing a second public statement within a few hours, reemphasizing that the off-duty pilots who participated were “exercising their lawful right to conduct nondisruptive informational picketing.”

As the MEC described, the airline failed to take the steps necessary, including providing a market-based contract, to ensure it attracted and retained pilots to meet a predictable return to flying. The company has since corrected its initial claim and clarified repeatedly and publicly that its own staffing projections and current staffing were to blame for the cancellations. 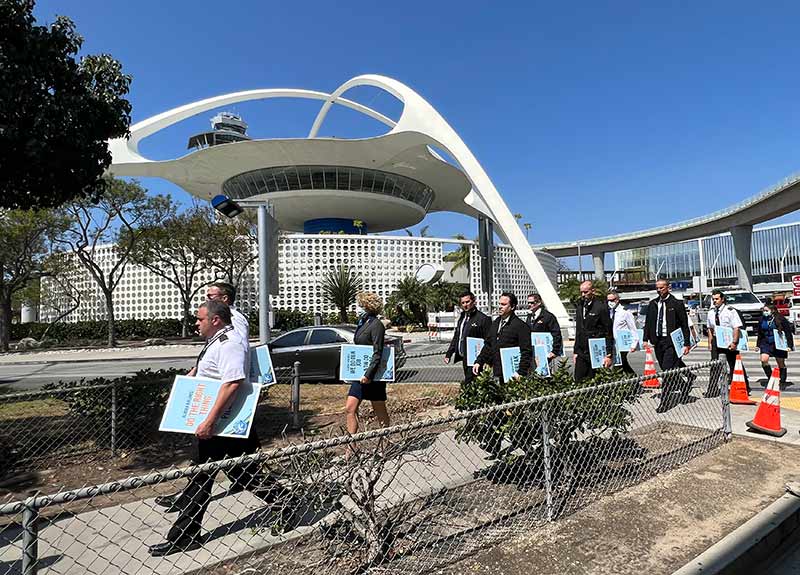 While some progress has been achieved during these collective bargaining talks, unresolved issues remain, including job security, stronger work rules, and better quality-of-life terms to provide flexibility and more reasonable schedules. The pilot spokespersons in each city emphasized that, at a time when many carriers are hiring pilots, the current Alaska pilot contract falls well behind those of pilots at comparable airlines in several important sections, and improvements are long overdue.

“The provisions we want to improve exist at other carriers and have proven their viability without harming those companies,” said McQuillen. “It’s time for Alaska Airlines to do the right thing and bring our contract in line with our industry peers.”

Before the April 1 picketing event began, pilots gathered at meeting facilities in the five cities to hear from ALPA and other pilot industry leaders supporting the Alaska pilots’ campaign to secure a new contract. Appearing on screens at the different locales, Campbell kicked off the list of speakers broadcasting from Seattle, remarking, “I’m glad to see all of you here today, and honestly I’m not at all surprised. You’ve been the driving force of this MEC, and your presence here and at all of our bases is only the latest example of your commitment and resolve to improve our contract.” 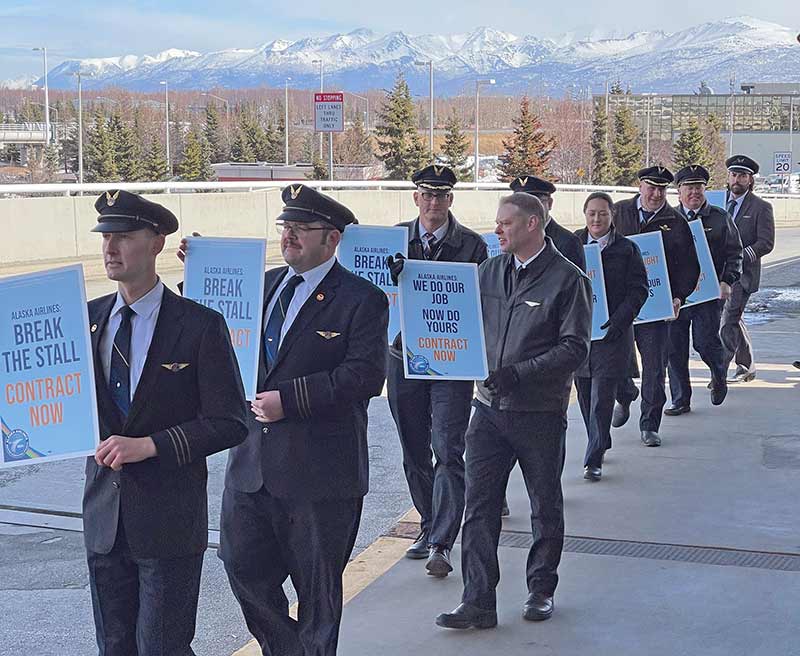 Dovetailing with Campbell’s comments, McQuillen remarked, “This is amazing and validates everything that we do and everything everybody works for here.” He noted, “There’s no reason we should be here today,” adding that the improvements the pilots are seeking are “industry common and in many cases nearly a decade overdue.” In conclusion, he thanked everyone for attending the event, adding, “Your presence matters.”

Examples included the 2017 joint collective bargaining agreement in conjunction with Alaska’s merger with Virgin America, which resulted in language regarding trip trading that has yet to be implemented. Gruner also highlighted other agreed-to provisions that management routinely undermines and underscored that the current scheduling system is “broken and gridlocked.”

Not all the presentations were from Alaska pilot representatives. F/O Christina Thomson (WestJet), her pilot group’s Strategic Preparedness and Strike Committee chair, traveled from Canada to be a part of this event. “I’m here on behalf of my MEC to assure the Alaska pilots that we’ll stand with you and support you until you finally get the contract that you so deserve,” she said.

Providing further evidence that the Association stands firmly with the Alaska pilots, Capt. Joe DePete, ALPA’s president, flew to Seattle to speak to the group and joined the pilots on the picket line. “My job is to give you every resource you need to win,” he asserted. “You’ve got the unity. Now you just need a few of the extra tools.

“If management is watching this today, we’re not going to let up,” he continued. “You’re going to do the right thing for these pilots!” Joining DePete in Seattle were Capt. Joseph Genovese, ALPA’s vice president–finance/treasurer, and Capt. Russ Sklenka, ALPA’s executive administrator.

The Alaska pilots continue to negotiate with the company with help of a federal mediator, and will keep up the good fight until they reach a resolution that addresses their concerns.

Watch the Rally and Informational Picket

Pilot Support Across the Industry

“All of us are committed to pushing the profession forward,” said Capt. Casey Murray (Southwest), president of the Southwest Airlines Pilots Association, who joined his fellow airline pilot leaders on stage at the prepicket rally and later on the Alaska picket line. “Sometimes it takes negative pressure to produce positive results; that’s what this is about. That’s what we’re here for.”

Capt. Eric Ferguson (American), president of the Allied Pilots Association, was also on hand to share his thoughts. “It’s our companies that compete and sometimes collaborate but, as labor, we must always cooperate and never compete,” he said, observing that “true unionism, solidarity, and collaboration are fundamental to accomplishing our mutual goals and, of course, the best path to negotiating and ratifying deals that will lead to an improved contract for all.”

On March 24, dozens of Alaska Airlines pilots were in New York City to conduct informational picketing at their carrier’s Investor Relations Day. Capt. Will McQuillen (Alaska), his pilot group’s Master Executive Council chair, shared his concerns with market analysts about the state of contract negotiations, emphasizing, “Alaska Airlines pilots have been crucial in the success of this airline, and what we’re looking for in a new contract will help our airline be competitive.”

While pilots stood outside holding signs communicating their demands, Investor Relations Day attendees were inside, being told that management plans to expand its fleet from 300 to 400 airplanes by 2025 and increase annual revenue by $400 million within the next five years. When directly asked whether market analysts should be concerned with the company’s ability “to attract, to retain pilots,” Ben Minicucci, Alaska’s CEO, dodged the question, describing instead Alaska’s new affiliation with a primary flight training academy.