More than 100 ALPA pilots from 10 airlines converged on Capitol Hill in Washington, D.C., on June 8 to brief federal lawmakers on the Association’s key aviation concerns. The event was the culmination of the ALPA’s ninth annual Legislative Summit. Participants spent two days fine-tuning their lobbying skills and reviewing the Association’s policy priorities before engaging in more than 140 scheduled meetings with members of Congress.

Communicating with federal officials to ensure that laws don’t weaken the U.S. airline industry or the airline piloting profession is a critical component of ALPA’s strategic plan. The importance of maintaining an ongoing dialogue with these national policy makers can’t be overstated because ALPA members work in one of the most regulated industries in the country.

On June 8, clusters of uniformed pilots, including a pair of Ohio constituents, walked along the city’s Constitution and Independence Avenues to make their scheduled appointments.

“We’re really concerned about the rhetoric some of the airlines are using regarding what they call a ‘pilot shortage,’” said Capt. Joe Morowitz (United), his pilot group’s Legislative Committee chair. Speaking with Rep. Bob Gibbs (R-OH) in the Rayburn House Office Building, Morowitz and F/O Mark Wapenaar (United) thanked Congress for the three financial installments totaling $63 billion from the payroll support program outlined in the CARES Act. Many airlines tapped into this landmark aid to maintain staffing during the COVID-19 pandemic and the subsequent dramatic downturn in air-travel demand.

The two ALPA members explained that there are currently about 1.5 certificated pilots (i.e., those with airline transport pilot and restricted airline transport pilot licenses) relative to the current flying opportunities available at U.S.-based airlines. This information comes from data provided by the FAA and the U.S. Bureau of Labor Statistics. “That’s 1.5 pilots for every available job,” Morowitz emphasized.

In fact, the notion of a pilot shortage has been presented as a distraction to mask the actual reason for this year’s numerous operational disruptions. The reality is that some airlines simply didn’t anticipate and adequately prepare for the industry’s recent rapid recovery. Returning pilots to the flight deck who haven’t performed at least three landings and three takeoffs in the last 90 days (to make them current) can be challenging. It requires time, resources, and training capacity.

In addition to being unready, some carriers in the fee-for-departure segment are experiencing challenges in competing for pilots with their mainline and low-cost counterparts, which offer larger aircraft and greater compensation. Further complicating matters, some carriers have opted to cut service to smaller, less-profitable markets during the recent operational slump, raising criticism and complaints from civic leaders and area residents who depend on these flights.

Blaming the countless spring and summer flight cancellations and delays on a so-called pilot shortage has become the means to a more insidious end—an attempt to roll back minimum pilot qualification and flight experience standards. Airlines rationalize that easing mandated safety requirements could increase the number of available pilots in the short term. But since the current first officer qualification regulation—commonly referred to as the 1,500-hour rule—was introduced in 2013, there’s been a 99.8 percent decrease in Part 121 passenger airline fatalities. That’s a truly remarkable safety record—one that ALPA intends to maintain.

Talking about the situation at his own airline, Morowitz pointed out, “We have more pilots now than before the pandemic.” In fact, there are nearly 2,000 more airline pilots currently working in the United States as compared to the total at the onset of the pandemic. Communicating this kind of detail to Gibbs is important because he’s an influential member of the House Transportation and Infrastructure Committee.

Next Door in the Longworth Building

In a similar session with Rep. Reuben Gallego (D-AZ), Capt. Mark Manausa (Frontier) remarked, “We’ve been noticing over the last eight months this conversation being generated on the Hill. We’re getting questions from staffers and members saying, ‘Hey, what’s up with this pilot shortage?’” He stated it’s a false narrative about pilot supply that’s being used to lobby risky changes to aviation safety standards.

Commenting on efforts to diminish pilot qualification requirements, F/O Michelle Arcamuzi (United) asserted that the public would never tolerate cutting training standards for surgeons simply because they were supposedly in short supply.

Others in the aviation industry have called for legislation to extend the current mandatory retirement age for airline pilots. As directed by Congress with the 2007 Fair Treatment for Experienced Pilots Act (P.L. 110-135) and standards set by the International Civil Aviation Organization, the FAA requires flight deck crewmembers to retire at age 65. At ALPA’s 130th regular Executive Board meeting in May, the Association’s pilot leaders adopted a resolution affirming this policy. (A full explanation of the Association’s position is available at alpa.org/facts-65.)

During the meeting with Gallego, F/O Gregory Sumner (United) and F/O Emily Ishikawa (United) commented on the huge pilot training backlog at their airline. They also highlighted the large number of qualified pilot applicants currently on file with their airline’s Human Resources Department as further evidence that pilot supply isn’t the problem.

In another session, ALPA members from Hawaii conducted a videoconference call with Rep. Ed Case (D-HI). Residual restrictions carried over from the height of the pandemic made it necessary for some ALPA members to meet with their members of Congress via Zoom while others needed to be escorted when in federal office buildings.

Capt. Frank Worthen (Hawaiian), F/O Ryan Devitt (Hawaiian), F/O Sean Lee (Hawaiian), F/O Carly Namihira (United), and F/O Miyukiko Kostelny (United) participated in the videoconference call from ALPA’s Capitol Hill office. In addition to addressing pilot supply, the group reviewed the importance of adequately funding the Federal Flight Deck Officer (FFDO) program. The pilots were mindful that Case is a member of the House Committee on Appropriations and, like many of his associates, is a frequent flyer.

Kostelny explained that the Transportation Security Administration trains and deputizes qualified airline pilot volunteers to defend the flight deck against acts of criminal violence or air piracy. She stressed the importance of having this additional layer of security, drawing from her own experience, revealing, “I’ve had an attempted breach of a flight deck when I was a captain at my previous airline.”

Kostelny added that since the pandemic, training for the program has been suspended and that FFDO proponents are asking for $30 million to adequately jumpstart and run the program.

Laying the Groundwork for Government Visits

Two days earlier, on June 6, Kostelny and more than 100 other participating ALPA pilots from around the United States assembled at a nearby hotel to prepare for this year’s congressional visits. These volunteers were welcomed by Elizabeth Baker, director of ALPA’s Government Affairs Department, who reviewed the various topics to be discussed and the many resources available to make scheduled visits more effective. “We’re here for you this week,” she said. Later in the agenda, Christopher Kush, CEO of Soapbox Consulting, explained the specifics of some of the scheduling and coordination tools to be used.

“Thank you in advance for the work you’re going to do this week,” remarked Capt. Joe DePete, ALPA’s president, who greeted the crowd. He talked about the Association’s legacy of advancing aviation safety and security, noting, “The early pilots of ALPA who raised safety concerns with their airlines were often fired,” adding that the airline piloting profession has made remarkable progress since ALPA’s founding in 1931. “I’m asking you to do the hard work to set the record straight on these issues,” said DePete.

Dovetailing with DePete’s comments, Greg Regan, AFL-CIO Transportation Trades Department president and one of several keynote speakers at the event, talked about the payroll support program and its trailblazing focus on maintaining staffing levels. “We’ve accomplished quite a few things in the hardest of circumstances,” he said, adding that there’s still much work to do. In talking to members of Congress, Regan pointed out that pilots bring a high level of credibility when addressing aviation issues. “Congress benefits from what you bring to the table,” he observed.

A popular segment at every Legislative Summit, a panel of congressional staff members talked to the attending pilots about the most meaningful ways to connect with their members of Congress. Panelists included Emily Ackerman, deputy chief of staff/legislative director for Rep. Guy Reschenthaler (R-PA); Maggie Ayrea, deputy chief of staff for Rep. Garret Graves (R-LA); and Ronce Almond, senior counsel for the Senate’s Committee on Commerce, Science, and Transportation.

Ackerman encouraged pilots to look for personal connections with their members of Congress, noting that similarities and shared experiences can make for a visit more memorable. Ayrea stressed the importance of focusing on what to communicate and setting priorities when conducting meetings via videoconference. Almond reminded the pilots to make a clear “ask,” so that the point of the meeting is understood. Jordan Austin, an ALPA legislative representative, moderated this discussion, which included time for questions from the audience.

As part of the summit agenda, several prominent political allies spoke to the meeting’s participants. Rep. John Katko (R-NY), the ranking member on the House Committee on Homeland Security and a member of the House Committee on Transportation and Infrastructure, talked about the work being done to address the enormous rate of unruly passengers incidents. According to year-to-date federal reports through May 31, 2022, the United States has had 1,443 cited incidents of unruly passengers, 483 related investigations, and 277 initiated-enforcement-action cases.

“As far as ALPA’s organization goes, you’re about as professional and as thorough as I’ve experienced,” Katko said. “You come to Capitol Hill and you don’t take half an hour to come to the point. You’re always prepared and on top of things.” Katko was recognized for his ongoing support with the ALPA Pilot Partisan of the Year Award.

Other congressional keynote speakers included Rep. Jake Ellzey (R-TX), a retired Navy flyer and a former pilot for Southwest Airlines. In his comments, Ellzey pledged to fight for the FFDO program, noting that had it existed in 2001, there’s a good chance the outcome of the 9/11 terrorist attacks might have been different.

Rep. Mark Pocan (D-WI), who serves on the House Appropriations Committee and the Labor, Health and Human Services, and Education Subcommittee, spoke to the group about the incredible inroads labor is making in organizing traditionally unrepresented employees. “There’s a lot of momentum, and it’s really exciting to be a part of what’s going on,” he said.

During the two initial days, summit attendees practiced their pitches, engaged in interactive presentations and discussions, and sat in on breakout sessions, all in preparation for their congressional meetings. And whether attending these congressional sessions in person or online, participating pilot volunteers spoke with one voice, building relationships while collectively communicating the union’s top priorities to U.S. policy makers. 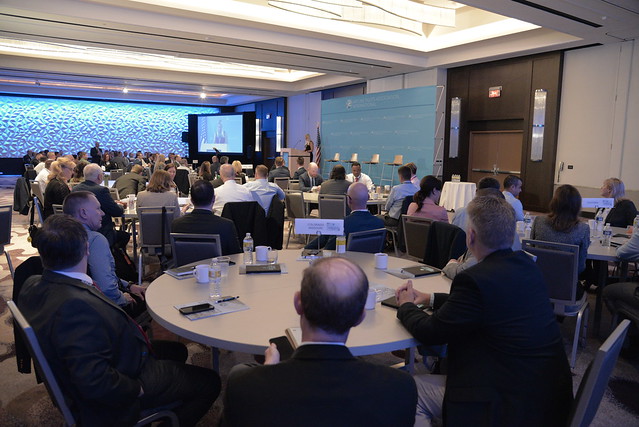