Pilots for Pilots: Thanks a Million

F/O Alan Solter (Delta), standing on right, and his family pose outside the trailer they lived in for nine months while repairs were being made to their home after hurricane damage.

On Sept. 2, 2005, a FastRead Newsflash went out to ALPA members announcing the establishment of the ALPA Emergency Relief Fund in response to the devastation brought about by Hurricane Katrina. The message from Capt. Duane Woerth, then ALPA’s president, both called for donations to the fund and invited affected pilots to apply for a grant to assist in their rebuilding efforts. It also announced that the fund was authorized “to provide similar assistance in any future disasters or emergencies.”

From the start, the program has been centered around pilots for pilots. “‘Pilots for Pilots’ is really what this resource is all about,” noted Capt. Bill Couette, ALPA’s vice president–administration/secretary, at the Association’s fall 2013 Executive Board meeting as he announced the fund’s rebranding to Pilots for Pilots (P4P). As of late last year, P4P has dispersed $970,213.93 in grants to assist ALPA pilots and their dependents, while receiving $1,068,404.07 in donations since the fund’s creation.

The first grants went out barely a week after Katrina, with 13 pilots from American Eagle, Continental, Delta, FedEx Express, United, and US Airways receiving the inaugural assistance.

These grants—and donations—continue today, with ALPA reminding pilots after a natural disaster occurs about the fund’s availability and the need for continued donations. P4P grants have helped pilots affected by floods, wildfires, earthquakes, tornadoes, hurricanes, tropical storms, and more. And ALPA and its members have responded, rising up in times of need to ensure that those who need help get it.

A prime example of this support came in late summer 2017, as a trio of hurricanes—Harvey, Irma, and Maria—hit in quick succession. Due to the devastating effects of these storms, 179 pilots received grants totaling just more than $387,000. P4P had never experienced such a demand for assistance, which threatened to wipe out the fund’s resources.

In response, ALPA members donated approximately $200,000 out of their own pockets to help their fellow pilots; the remaining money needed to cover the financial assistance came from an ALPA grant. It was truly a team effort of pilots helping pilots, as members dug deep and local and master executive councils held fundraisers.

This year, P4P has provided grants to many pilots directly affected by COVID-19, in addition to those impacted by the February ice storms in Texas, leaving the fund’s balance precariously low. P4P needs your help if it’s going to continue assisting members in need.

Air Line Pilot recently spoke to several members who were affected by various natural disasters—hurricanes, wildfires, earthquakes, and a volcanic eruption—about the impact of the program on them and their families.

F/O Tanya Bulleigh (United) was, like many, feeling the pinch from the COVID crisis when a winter storm struck Texas this past February. “We stayed warm by nailing blankets to the ceiling in our living room, which has a gas fireplace, to keep the minimal warm air in that one room,” she said. Bulleigh discovered water line breaks in eight different locations and turned to P4P for help with the immediate repairs.

Within hours of an earthquake hitting, F/O Jason Fullmer (FedEx Express) received an e-mail from ALPA promoting the P4P program. “I was actually on a trip when the earthquake hit, and before my company could even get me home on the first flight, ALPA was already working to provide assistance funds,” he said.

Capt. David Miles (United) experienced the same rapid response after he and his family were forced to evacuate due to a California wildfire in 2018 that resulted in smoke damage to their home. “I received a call that my request was being reviewed a couple days after submitting it,” he said, “and was notified that it was approved within the week—and the check arrived less than a week later. The entire process was very easy, and the response was very timely.”

And it’s this timeliness that makes P4P assistance so helpful. The grants aren’t huge—the maximum amount is $2,500—but the immediacy of the payment helps recipients bridge the gap until other forms of assistance kick in.

Capt. Naseem Ahmed (United) noted, “Insurance payouts can take months to receive, but the P4P grant was received in a timely manner.” Also a victim of California wildfires, Ahmed used the funds to “purchase essential living goods, as everything we had was lost—clothes, food, toiletries, etc.” He acknowledged, “Until you actually need this assistance, you have no idea how beneficial it is.”

This sentiment was echoed by F/O Jay Belmear (Alaska), who suffered more than $100,000 in damage in the Alaska earthquakes of 2018. He received a grant within a week of applying and was able to use the funds toward getting crucial interior repairs started on his house. “The assistance provided some hope and encouragement during a very stressful time,” he said. 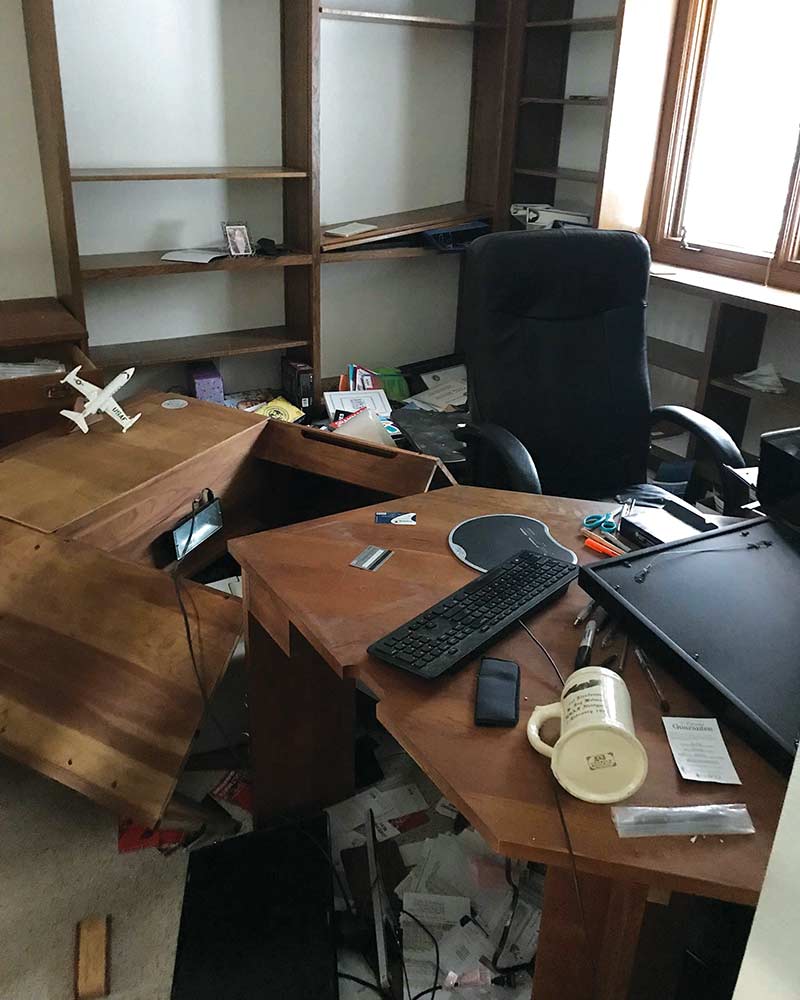 F/O Alan Solter (Delta), whose house was damaged by a hurricane, reported that the fund allowed him to put a payment down on a contractor and begin repair work sooner than he’d have been able to otherwise. “This allowed us time to get a loan processed,” he said, “and also helped with basic expenses, as we were living in a trailer. The grant was a godsend and helped us get through a very difficult period.”

For F/O Neekowee Clearwater (Alaska) it went beyond just living expenses to finding a place to live. “Our home and land were covered with lava,” he explained. “We had to pay our mortgage and rent a place while we looked to buy a new home,” and P4P eased the burden. “It was very helpful at an extremely stressful time for us,” he said. “I wish the fund never had to be used, but it’s such a relief for those of us who’ve had to take advantage of it.”

“The fact that we even have this fund speaks directly to the fraternity that’s ALPA,” said Miles. “We pilots take care of one another during tough times. ALPA is more than just a union—it’s a family.”

“It’s an excellent example of pilots helping pilots when they need it most,” Fullmer observed, adding, “Thanks to my fellow pilots who’ve donated to P4P, my family and I had one less thing to worry about in the immediate aftermath of our house and our life being turned upside down.”

“We’re so appreciative and grateful for the assistance and for the incredible generosity and support of other pilots,” said Bulleigh. “This was such a ray of sunshine for us in such a negative and dark year. It’s so rare and uplifting to find people who donate their time and money to help others.”

“If every member can spare to donate a little,” Belmear noted, “the fund will have more than enough to help members in need. You never know when you’ll be the one in need. I can assure you that I never expected to need this kind of assistance.”

After all, we’re all just a disaster away from needing P4P.

ALPA has declared June Pilots for Pilots (P4P) Awareness Month. P4P is truly “pilots for pilots”: every single penny donated to the fund goes to assist fellow pilots in need.

P4P currently has an extremely low balance, and hurricane season has yet to begin. If the fund is going to help every pilot in need this year, ALPA needs your help.

Please visit the P4P website to learn about the fund, read about additional pilots P4P has helped over the years, and make a donation, if able. The P4P directors have created new donor levels to encourage recurring donations, and anyone donating at the Lincoln Level or above in 2021 will receive a special “P4P Donor” lapel pin while supplies last.

If you know of an ALPA member who’s been affected by a widespread natural disaster, please tell them about P4P and encourage them to apply for a grant.

The Pilots for Pilots Donor Club

Thank you, 2020 Pilots for Pilots (P4P) donors, for your generosity during a difficult year. Your donations ensured that your fellow pilots got the help that they needed. —Capt. Nathan Hillard (Delta), president, P4P Board of Directors; Capt. Ken Reinert (Air Wisconsin), P4P treasurer; and Capt. Kathi Hurst (United), P4P secretary. View the list.