Aviation has provided a truly extraordinary journey for F/O Stacey Jackson (WestJet), who was recently honoured with the 2020 “Elsie” Flight Operations Award from the Northern Lights Aero Foundation. This prestigious accolade was presented to the B-737 pilot for her impressive résumé of current-day responsibilities, her more than two decades of aviation-related accomplishments and contributions, and her many experiences and adventures along the way.

“To be recognized as an Elsie MacGill award recipient is a very significant moment in my life,” said Jackson during a videotaped acceptance speech. “When my career began, I didn’t know anyone in the industry, much less have a role model whom I could ask career-specific questions or seek advice.”

She continued, “I experienced my fair share of challenges, and I would have benefited from a mentor’s guidance. For this reason, I’m a strong advocate for mentorship and outreach at all levels of aviation, as we never truly stop learning in this dynamic industry.”

Based in Markham, Ont., the Northern Lights Aero Foundation encourages women to pursue aviation and aerospace careers by engaging in “outreach, facilitating mentorships, providing scholarship opportunities, and championing the values of diversity and inclusion.” MacGill, the foundation award’s namesake, was the first woman ever to earn an aeronautical engineering degree and worked to advance Canada’s aircraft manufacturing efforts during World War II.

During Jackson’s four years as an ALPA member, she’s made it her priority to give back to the Association and to the profession. Jackson serves as a member of and instructor for ALPA’s Accident Investigation Board. She’s the flight-time/duty-time coordinator for ALPA Canada, which has worked to strengthen the nation’s flight crew fatigue regulations. She’s also a member of ALPA’s President’s Committee for Diversity & Inclusion. And in her “spare” time, Jackson is the ALPA Canada representative to the International Federation of Air Line Pilots’ Associations Female Pilots Working Group, which examines issues impacting female airline pilots around the globe. 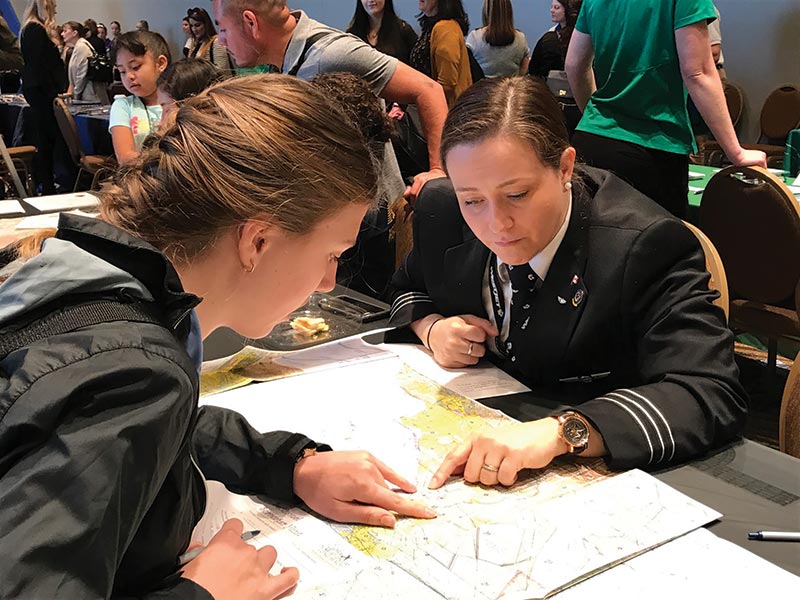 Jackson speaks with a student at the 30th annual Women in Aviation International Conference held in March 2019.

“I first became interested in flying when a friend convinced me to join the Royal Canadian Air Cadets, the national youth program that promotes citizenship, leadership, physical fitness, and general aviation, as well as an interest in the nation’s armed forces,” said Jackson. She was 14 at the time and participated in a glider activity. “It was fall in Ontario, the leaves were changing color, and the air was crisp and clear,” Jackson recalled. “I remember thinking, ‘I have to find a way to do this for the rest of my life.’”

Jackson graduated with a diploma from the Sault College of Applied Arts and Technology and initially went to work for a small seaplane operation in British Columbia. She performed a variety of duties, including dispatcher, ground school instructor, and answering the phone, before eventually flying the carrier’s Cessna 172 Skyhawk and Britten-Norman BN-2 Islander.

A year and a half later, the seaplane operation was purchased by another company, compelling Jackson to move to the Caribbean island of St. Maarten to continue her employment with the company. She soon transitioned to Winair, where she flew the carrier’s de Havilland DHC-6 Twin Otter.

Recognizing the need for IFR experience to advance her career, Jackson returned to Canada where she applied for and accepted a job with Voyageur Airways flying Beechcraft King Air 200s to conduct medical evacuations for the North Bay, Ont., aircraft charter and leasing operation. However, six months later, Voyageur lost its medevac contract and Jackson was furloughed. She returned to work as a flight instructor before transitioning to a small overseas de Havilland Dash 7 operation for a brief time.

Jackson continued her Dash 7 flying with Trans Capital Air, based in Toronto, Ont., where she worked for four years flying United Nations (UN) missions throughout Africa and the Middle East. She transported freight, delivering vaccines and other necessities. She also flew dignitaries, UN peacekeepers, and physicians from Doctors Without Borders. Jackson noted that on several occasions the airplanes she was flying were fired upon by hostile ground forces, but fortunately they never sustained any damage from the attacks.

While Jackson was flying UN operations, a civil war erupted in South Sudan and she was called on to transport evacuees from Juba, the South Sudanese capital. Prior to this assignment, she’d been stationed in Afghanistan where a bomb-laden minivan struck the perimeter wall protecting the area where her layover facilities were located. Following the blast, a sortie ensued as rebel fighters poured into the compound.

These and other stressful events convinced Jackson that it was time to make another career move. “The South Sudan evacuation occurred about six months after I got married,” she said, adding, “My parents and husband convinced me it was time to go.” She subsequently accepted a job at WestJet Encore before moving on to WestJet, her current employer.

While flying UN missions, Jackson earned a bachelor of science degree in aeronautics with a minor in aviation safety from Embry-Riddle Aeronautical University in 2016, thanks to its online learning program. She continued her studies, earning a master of science degree in aeronautics, specializing in human factors. “I’ve been fascinated with human factors issues ever since first learning about the subject at Sault College.

“Human factors is a science-based examination of human capabilities and limitations as they relate to the work environment—in this case, the flight deck,” Jackson observed. “In my masters degree program, we explored cognition, sensation, perception, and how the brain picks up different environmental cues while flying,” she commented, noting that she found it fascinating that “two people sitting next to each other in a cockpit can read the same situation in two very different ways.”

To help fund her education, Jackson applied for a few scholarships, including one from the International Society of Air Safety Investigators, an organization to which she currently belongs. Competing for one of four scholarships, she wrote and submitted a paper titled “Future Safety: Apply Lessons Learned in Human Factors to Commercial Space Operations,” which looked at the 2014 Virgin Galactic’s Spaceship Two accident, the role human factors can play in aircraft accidents, and the lessons learned from these tragedies. “We have to learn from mistakes so that they aren’t repeated,” she remarked.

Jackson presented her paper at a special ceremony in The Hague, the Netherlands. “It was a phenomenal experience,” she said, adding “It was a global symposium of experts in accident investigation, and I was thrilled to be part of it.” 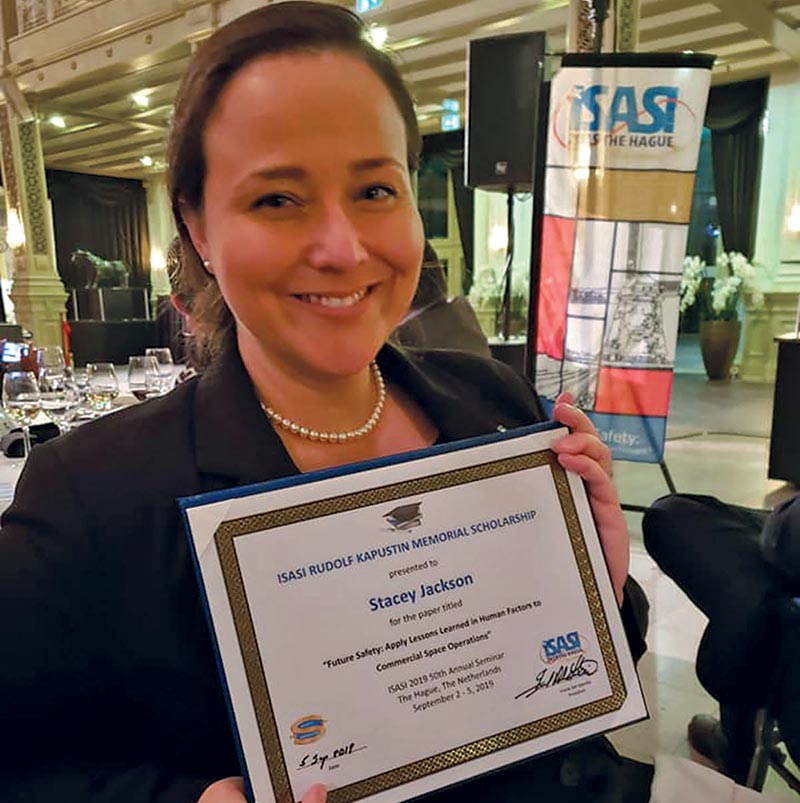 Jackson proudly displays her International Society of Air Safety Investigators scholarship certificate while attending the organization’s 2019 conference in The Hague, the Netherlands.

In time, Jackson would take her interest in human factors issues one step further. She founded HF Aviation Solutions, an educational consulting firm that promotes human factors awareness at all levels in the aviation industry. The organization provides basic and advanced human factors training and serves as a human factors consultant for companies, conducting evaluations of current and planned systems.

“If an organization experiences an incident or accident, HF Aviation Solutions can also conduct an assessment and provide feedback regarding both training and operations,” Jackson said.

Adding to her list of duties, this mother of three serves as president of the Upper Canada Chapter of Women in Aviation International (WAI). Drawing from her knowledge of human factors issues, she recently gave a presentation at this year’s virtual WAI conference titled “Brain Power: Improve Your Performance as a Student, Decision-Maker, and Leader.”

“I’ve been fortunate to experience a career that has been anything but ordinary,” she observed while accepting her award from the Northern Lights Aero Foundation. “I’ve had exceptional opportunities to experience aviation throughout the world and connect and engage with many different people and cultures. I know that none of this would have been possible were it not for the brave and courageous women who led by example and dared to dream.”

The Northern Lights Aero Foundation recognized this esteemed aviator for continuing the legacy of her predecessors, not only by serving as an airline pilot but for the numerous ways she continues to give back to her industry and the profession.